Here’s a look at nine can’t-miss state parks to visit in Nebraska.

Located midway between Omaha and Lincoln, and the crown jewel of the Nebraska state park system, Eugene Mahoney State Park combines traditional camping with a lodge and cabins as well as tents. Bring your own food or enjoy a meal at the restaurant in the main lodge building. Challenge your climbing skills over six courses of the Go Ape ropes and zipline obstacle course. You’ll easily spend 2 to 3 hours carefully stepping your way across the rope courses before riding a zipline to complete each challenge. If you prefer a more laidback experience, enjoy a guided horseback ride along a trail. You’ll enjoy the view of the Platte River valley from atop the 70-foot-tall observation tower. Mahoney State Park is also home to hiking trails, fishing, paddleboats, and an amphitheater where you can enjoy outdoor performances during the summer.

Located in northeast Nebraska at the confluence of the Niobrara and Missouri Rivers, Niobrara State Park is an outdoor enthusiast’s paradise. With 14 miles of trails, hikers enjoy scenic views of the river valleys as well as the rolling hills of the area. Anglers enjoy fishing at the park’s lake. During the summer, you can combine a guided horseback ride along the trails with weekend park-hosted bison cookouts that feature cowboy poets and other entertainers. The park has cabins available for rent as well as RV and tent camping sites.

Communing with nature is the name of the game at Platte River State Park. With ample hiking trails, you’ll find yourself walking over a waterfall (in all fairness, the waterfall is only a few feet tall). Walking through the woods and along creeks, the natural settings create impressive views. You can also enjoy a horseback ride along the park’s trails. Camping — glamping, really — at Platte River State Park will change the way you look at spending time in the great outdoors, offering a unique experience that combines the comfort of home with nature. Enjoy a tableside dining experience at the park’s Scott Lodge, or prepare your own meal over an open fire. Located midway between Omaha and Lincoln, the state park also offers kayaking and canoeing along Decker Creek.

At 63 feet tall, the state’s highest waterfall is found at Smith Falls State Park near Valentine. Visitors enjoy standing underneath the waterfalls, which give them an icy shower as they’re located in the shadows of trees that shade it from the sun’s rays. Located near the southern end of a one-time glacier, the falls are known for their unique trees and plants, such as birch and aspen, which are typically found in farther north climates. Visitors access the Smith Falls trail via a historic footbridge (actually a former vehicle bridge from Verdigre near Niobrara) across the Niobrara River. Smith Falls became a state park in 1992, providing one of the best areas to kayak the scenic Niobrara. Whether you visit for the day or plan to tent camp for a weekend, Smith Falls State Park offers a look into Nebraska’s days during the Ice Age.

Located in the forested rolling hills of northeast Nebraska, Ponca State Park features amazing views as well as great hiking trails. Visitors are greeted at the park’s entrance by the Towers in Time, a sculptural interpretation of the area’s history told through art on three geologic towers, with a cascading waterfall celebrating the importance of water. With an overlook that offers a look at the Missouri River with views into three states — Nebraska, Iowa, and South Dakota — you’ll witness the beauty of the river valley. You can hike more than 20 miles of dense, hilly trails that will challenge the best hiker. The dirt trails take you along the edges of hills, with looks into valleys, as well as the occasional wildlife, including deer, foxes, and coyotes. Birdwatchers appreciate sightings of warblers and songbirds, such as northern orioles, hummingbirds, and eagles. Ponca State Park is home to the oldest tree in Nebraska, an oak dating back to 1644. The park has two boating ramps for the Missouri River as well as great spots for shoreline fishing, with catfish and walleye among the popular fish caught. The park also offers cabins for rent as well as RV and tent camping sites.

Exploring the large sandstone cave may be the most popular attraction, but Indian Cave State Park invites visitors to hike more than 20 miles of trails as well as exploring the area’s history and more. Situated in southeast Nebraska alongside the Missouri River, Indian Cave State Park is home to a pioneer cemetery and a living history town featuring a schoolhouse and a general store. With plenty of camping sites available, you can park an RV or pitch a tent. Indian Cave State Park is known for its annual celebration of Halloween, with haystack figures, hayrides, and decorations that could scare the bravery out of any would-be hero. The RV area features several campers decorated for the season. While at Indian Cave State Park, be on the lookout for wildlife such as woodchucks, turkeys, beavers, raccoons, and deer. Horseback riding is available on weekends during the summer and fall.

Nebraska celebrates the 100th anniversary of its state park in 2021, as Chadron State Park opened in 1921. Located among the buttes and canyons of the state’s Pine Ridge, the park is popular with hikers and mountain bikers. Enjoy nearly 20 miles of hiking trails that take you among the hills, buttes, and forests that will make you look at Nebraska through a different lens, forgetting that many think of the state as just being flat. Anglers enjoy catching trout in Chadron Creek and the park’s lagoon. You’ll also find paddle boats, horseshoe pits, and a disc golf course among the fun activities at the park. Known for its trading post, you’ll find everything you need to enjoy a fun day or weekend visit to Chadron State Park. Visitors can reserve RV and tent campsites.

Home to the state’s first fish hatchery, Schramm Park State Recreation Area near Gretna hugs the Platte River valley. With a 3-mile trail that takes hikers through wooded bluffs overlooking the river valley, you’ll have fun crossing a suspension bridge. The recreation area also features a 1.5-mile loop that is perfect for casual hikers and families, taking them through trees and other plant life. With more than 20 aquariums, the Schramm Education Center — formerly known as Aksarben Aquarium — offers a look at fish, reptiles, and amphibian species native to Nebraska. The park also includes remnants of the fish hatchery, including a 1914 hatch house and canyon ponds where rainbow trout live. Visitors can feed the fish.

Located in the Nebraska panhandle, Fort Robinson State Park has enjoyed multiple roles over the years. Beginning as Camp Robinson in the mid-1870s, it served as an outpost during the U.S.-Indian Wars. Later, as Fort Robinson, it served as a post for Buffalo soldiers, a name given to African-American soldiers. Following that, it served as a post to train horses and mules during World War I, and later was a prisoner of war camp for captured German soldiers during World War II. The fort closed in the late 1940s. The Fort Robinson Museum shares artifacts and memorabilia covering the fort’s history.

A memorial to Lakota (Sioux) Chief Crazy Horse is located near the site of his death. While his death remains a controversy, the federal government has maintained he was killed while trying to escape, while Native Americans believe he was murdered because he presented a threat to the country’s westward advancement.

While the park’s history is a must to check out when visiting, Fort Robinson is also known for its attractions, such as jeep tours of the area’s buttes. You can also enjoy a horse-drawn wagon tour of the park or a stagecoach ride during the summer.

Nature enthusiasts enjoy hiking about 60 miles of trails that take you along the buttes and through the area’s forests. Fishing and swimming are also available in the area. You can take a drive around the park and view the park’s bison and longhorn herds.

Experience the past via the historical buildings that have been transformed into lodges, where you can sleep in the same rooms as soldiers and others once did. The Fort Robinson restaurant serves breakfast, lunch, and dinner daily from Memorial Day to Labor Day.

While at Fort Robinson State Park, catch the weekly rodeo each Thursday during the summer. It’s free for visitors.

For more on getting outdoors, consider our picks for the 10 Best Hikes In Scenic Nebraska. 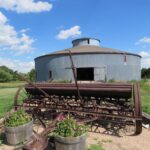