If you want to enjoy your own fairytale royal adventure just like in the Hallmark movies, visit Bucharest, Romania.

The best way to get to Bucharest from the States is by air. Bucharest Baneasa Aurel Vlaicu International Airport is located 15 miles from the city center. If you are traveling around Europe you can arrive in Bucharest by train or bus.

What makes Bucharest, Romania, so unique that Hallmark continues to return to film royal palace-themed movies again and again?

Romania is a nation of varied landscapes, from the jagged Carpathian Mountains to the sandy shores of the Black Sea. The countryside is gorgeous. You can find medieval towns, imposing castles, painted monasteries, and wooden churches.

It is a nation of immense culture — a place where Eastern, Western, and Southern Europe all seem to intersect. This is most evident in Romania’s capital city, Bucharest.

Bucharest is a bustling metropolis filled with amazing architecture, cobblestoned streets lined with quaint shops and restaurants, and many modern amenities. The city is such a nexus of culture and history that it is often dubbed the “Paris of the East.” Add a blanket of snow and some Christmas spirit, and you have the perfect set for a Hallmark Christmas movie.

Let’s look at some of the reasons you should plan a trip to Bucharest.

A former royal palace, Snagov Palace sits on Lake Snagov, about 40 miles northeast of Bucharest. Completed in 1932, the castle has spellbinding fountains and a formal garden, plus a guesthouse. When there is a blanket of snow, it becomes a winter wonderland — the perfect setting for romantic Hallmark movies.

The palace is enormous and hosts a ballroom that holds about 1,000 guests. Fitting for a palace, the rooms are spacious with carpet and wallpapers made of gold fibers, fireplaces, private bathrooms, and a balcony.

The castle is quite an exclusive location and it is surrounded by lake and forest, meaning great views from every angle.

Hallmark’s Christmas at the Palace and A Royal Christmas were filmed at this magnificent location. You might remember the grand entrance down the staircase.

The palace is open for tours Monday through Friday.

Located in the Carpathian Mountains, this neo-renaissance castle looks like something straight out of a romantic fairy tale. The facade of Peles Castle is decorated with colorful murals and intricate woodwork that give it an air of whimsical fantasy. The structure was commissioned by King Carol I, who fell in love with the scenic location.

Owing to the fantastic majestic setting, the 160-room castle is the second most visited castle in Romania and has been featured in several movies and television series. It is no wonder Hallmark selected this quintessential location as the setting for several of its movies. It was featured in the 2011 Hallmark Channel movie A Princess for Christmas and 2018’s Royal Matchmaker, as well as A Christmas Prince: The Royal Wedding, which came out on Netflix in 2018.

Peles Castle is about a 2-hour drive from Bucharest and can be reached by train or bus. There are various tours available to view the inside of the castle.

Roughly 2 hours from Bucharest sits Bran Castle, also known as Dracula’s Castle. Perched on a jagged crag near the town of Bran, this castle dates from the late 1300s.

It was built on a site of a former fortification that was destroyed by Mongol invaders in 1242. When Bram Stoker penned Dracula’s story, he likely didn’t have this castle in mind when he created the spooky residence of his titular vampire. It is only since the story’s publishing that the castle has come to be associated with the tale.

Dracula is loosely based on Vlad Dracula, the 15th-century ruler of the region, better known as Vlad the Impaler. Vlad is considered a national hero in Romanian culture, as he defended the region from invaders on several occasions. He was known for his brutal tactics, which garnered him the “Impaler” title.

Despite its reputation, visitors will find a romantic and historic castle in a dreamy picturesque valley. Guests can take tours of the property, which includes a recreated medieval Romanian village on the grounds. The beauty is amplified in winter when the valley is often shrouded in a layer of fluffy white glittering snow.

The second-longest river in Europe, the mighty Danube forms the southern border of Romania. The waterway carves its way through the Carpathians in western Romania before meandering its way across Bucharest’s plains.

There are many tourist opportunities on the waterway that fit any price range. Some of the best trips through Romania are aboard romantic river cruises that snake their way up the river, stopping at iconic cities and landmarks along the way.

Two of the best landmarks to see along the banks of the Romanian Danube are the Iron Gates and the sculpture of Decebalus.

The Iron Gates is a region where the river narrows as it passes through the mountains. The area is characterized by dramatic cliffs and tiny, picturesque villages.

The sculpture of Decebalus is a rock carving and a rather peculiar sight. Although it appears as an ancient monolith, it was completed in 2004. It sits high above the river, dominating the cliff face. It was commissioned to honor Dacia’s last king, who fought the Romans to preserve his kingdom. His struggle has immortalized him as something of a folk hero for many Romanians, hence the monument.

Several miles northeast of Bucharest, the Danube River empties into the Black Sea. The Black Sea is technically the largest inland body of water in the world. The lake is truly enormous, reaching depths of over 7,000 feet and extending for hundreds of miles in every direction.

The Romanian shore is quite sandy. There are many resorts and beaches along the over 150-mile-long shoreline.

Fishing and boating are favorite activities here. The most popular town for beach lovers is Mamaia, which has become a major resort destination for the region. It is an easy day trip from Bucharest and a perfect place for visitors to spend several days basking in the sun and enjoying the sea.

This section of Bucharest is characterized by narrow, cobblestone streets lined with a myriad of shops, restaurants, bars, clubs, and historic buildings.

The Old City is chock-full of character, between the ancient churches and the alleyways of old-world charm. This is perhaps the most “touristy” area of the city, but it is where you will find many of the city’s best eateries and nightlife.

The classically European streets make for easy walking with little traffic. Whether you are antique shopping or looking to wine and dine the night away, this is where you want to be.

7. Palace Of The Parliament (Casa Poporului)

This grand and imposing structure, Palace of the Parliament, or Casa Poporului, stands on a hill in downtown Bucharest. Its unique architecture combines neoclassical with Socialist Realist, a product of the nation’s communist past under Soviet influence.

The building’s enormous size cannot be communicated through pictures alone. It is the third-largest government building in the world, trailing only the Pentagon and a building in China.

In addition to its parliamentary offices, the building also boasts a museum of contemporary art and a museum on Communism. Even with all this, the gargantuan building stands mostly empty. Many different conferences and events are held in the cavernous and opulent halls throughout the year.

Tourists are welcome at the Palace of the Parliament seven days a week, 365 days per year. To visit, you must schedule your tour in advance, provide proper identification, and pay for your tour in cash.

Much like our National Mall, Union Boulevard is a 2-mile-long promenade through Downtown Bucharest.

It runs from the parliament, through several squares, to an enormous roundabout. The street was intentionally designed to mimic the famous Champs-Elysee in Paris. Like its French counterpart, this tree-lined avenue is flanked by trendy stores, restaurants, monuments, and official buildings.

Along Union Boulevard sits Union Square. At the center of the enormous plaza is a set of famous, beautiful fountains.

The Union Square Fountains were initially built during the nation’s communist period but have been repurposed to reflect the nation’s unity and prosperity since that time.

The fountains are illuminated at night, making for an excellent stop after an evening exploring the nearby old town. A choreographed Water Symphony is held on Fridays, Saturdays, and Sundays between May and October.

The square is a popular gathering site for various events and people simply meeting up.

Pro Tip: During the colder months, the fountains are usually shut off. A huge Christmas tree is placed in the area during December.

Additionally, the square is bordered by a large, modern shopping mall perfect for those in need of some retail therapy.

An architectural marvel, this concert hall is absolutely beautiful. Built in the neoclassical style, a common theme for many of the buildings in the capital, the Romanian Athenaeum incorporates many French influences.

Every aspect of the building is intricately detailed. The chamber surrounding the main hall boasts a coffered ceiling. Each coffer contains a golden fleur-de-lis inside. The same room is full of enormous pillars created out of rose-colored marble.

The concert hall itself is surrounded by a panoramic painting, with majestic gold and red detailing adorning every surface from the floor to the dome. The site is on the European Heritage Label list and is considered one of the Seven Wonders of Romania.

The Romanian Athenaeum is a must-see when visiting Bucharest.

Another so-called Wonder of Romania, Central University Library of Bucharest again exemplifies Romanian architecture and is a repository of Romanian literature.

The building was created to serve as the library for the university in the city. The king, Carol I, bought the land for the library. His likeness is forever memorialized on the statue in the plaza in front of the building.

In addition to academics, the building plays host to several festivals and cultural events each year. It also sits conveniently directly across the street from the National Museum of Art.

One of Bucharest’s largest and most-loved parks, Herastrau Park covers about 272 acres consisting of grassy lawns, woodland, and a lake.

A ferry ride is a great way to appreciate the park’s natural beauty, or rent a rowboat and glide across the lake at your own pace. Ferry rides and boat rentals are available between April and October.

Walking and biking on paths that encircle the lake and crisscross the park’s ornamental gardens is a great way to spend the day.

These are just a few of the highlights that make Bucharest, Romania, the perfect destination for filming a Hallmark movie. 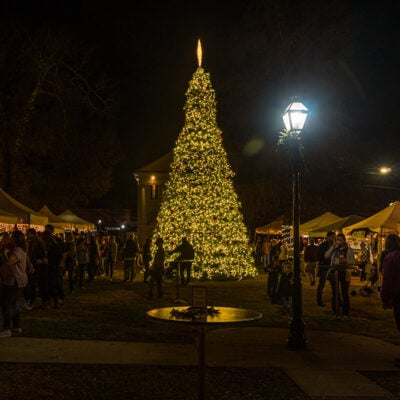 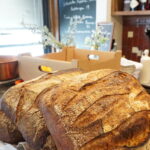 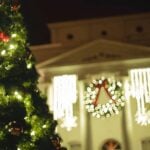