The Best Stops On A Weird And Wacky Alabama Road Trip

Whether it’s the world’s largest statue made from aluminum cans or dark and creepy museums with macabre displays, every state has its fair share of, shall we say, unique roadside attractions, and Alabama is no exception.

Known for its beautiful southern Appalachian mountains, its meandering blackwater rivers, and its pristine white Gulf beaches, Alabama has become a popular vacation destination. But when you visit the state, it’s worthwhile to get off the interstates and head down the state’s backroads to visit these weird and wacky roadside attractions. You’ll meet some fascinating people and get a glimpse of another side of the state. And it doesn’t matter what time of year you visit. These stops are fun in any season, and all are easily accessible for everyone.

There is a reason many of us are afraid to visit anyone but our regular family doctor. We’re afraid we’ll be in the hands of a quack. Those feelings are validated when you visit the Holmes Medical Museum in Foley. While most of the museum covers the evolution of medical science through the years, there is one room — Room 5 — that is known as the Room of Quackery and illustrates a different side of medicine, with instruments and equipment used by professionals with dubious credentials. As the sign says, the equipment (like radiated water, bloodletting, and color waves that would “cure broken bones and the pain of childbirth”) rarely cured anyone, and many died. Admission to the museum is free.

After your visit, walk a block west of the museum to Stacey’s Olde Tyme Soda Fountain, one of the few old-fashioned soda fountains remaining on Alabama’s Gulf Coast. You can get milkshakes, ice cream sodas, or — my favorite — New York egg creams (trust me — there are no eggs in them).

When you think of weird, wacky, and quirky roadside attractions, the first things that probably pop into your mind are those giant statues made from weird materials. How about a giant rooster made from old car bumpers? Larry Godwin has been making sculptures out of bumpers for many years, including the 12-foot eagle at Goshen High School. You will find his gleaming car bumper rooster at the Art Wurks studio in Brundidge.

As of this writing, the rooster is being repaired. Its legs used to move, and they are trying to get them mobile again.

There is something ominous and dangerous lurking in the woods of Elberta — dinosaurs! Well, replicas of dinosaurs, including the tyrannosaurus rex, stegosaurus, and triceratops. They are all lawn ornaments that were created by artist Mark Cline at his home in Virginia. When Alabama billionaire George Barber visited Cline and saw the sculptures, he bought several and put them along the entrance road to his marina.

The sculptures are impressive, but the dinosaurs are shy, and you’ll need to look hard to find them. Cline also created a reproduction of England’s famous Stonehenge, which is also located in the marina. Admission to view both is free.

The best time of year to visit is the last weekend of March, when the annual Elberta German Sausage Festival is held. This arts and crafts fest serves up more than 7,000 pounds of sausage, and the proceeds benefit the Elberta Volunteer Fire Department.

In the early 1860s, William T. Mullen’s wife told him that if he didn’t stop drinking it would kill him, and she would place a whiskey bottle tombstone on his grave. He died in 1863, and she followed through on her promise. The unique tombstone can be found in the cemetery between the Clayton Baptist and Methodist Churches on North Midway Street in Clayton just north of Eufaula.

Why would anyone place a monument to a bug that completely destroyed the cotton industry in the South? The destruction of thousands of acres of cotton farms forced farmers to change to a better cash crop in order to survive — peanuts. In honor of this turnaround in their fortune, the town of Enterprise erected a monument to the boll weevil that stands at the intersection of U.S. 84 and East College Street.

The pain and grieving a parent feels after the loss of a child is unimaginable, but that is what happened in November of 1933 to Julian Comer and Alma Earles in the tiny Alabama town of Lanett. The couple’s daughter, Nadine, was diagnosed with diphtheria which progressed to pneumonia. Her father was in the process of building her the playhouse she always wanted for Christmas that year. When Nadine found out about the playhouse, she proclaimed, “Me want now!”

Sadly, she succumbed to her illness just before Christmas. Her father completed the house and erected it at her grave in Oakwood Cemetery. Her parents decorated the interior with toys. The playhouse is now maintained by the city.

Near the town of Millbrook, there is an island in the middle of the Alabama River called Spectre that has a little secret — it’s home to a ghost town that never was. The island has rows of buildings that were never inhabited — well, except for film crews.

The buildings were constructed as sets for the 2003 Tim Burton movie Big Fish. When filming was completed, the sets were left abandoned in place. Today, those buildings resemble a ghost town, and you can walk the eerie streets, launch your kayak for a little paddle in the river, and even camp there (sites are limited). The day use fee is $3 per person.

What would a trip to the weird and wacky be without a stop at the world’s largest… something? The town of Anniston is home to the world’s largest office chair. The chair is 33 feet tall, 15 feet wide, and proudly sits next to Miller’s Office Furniture on Noble Street. Since Leonard “Sonny” Miller built the chair in 1981, many other larger chairs have been built, but this was recognized by Guinness World Records as the ultimate office chair.

After paying a visit to the chair, spend the rest of your afternoon at the Anniston Museum of Natural History. Your entire family will be fascinated by the collections of Native American and African artifacts and some of the oldest wildlife dioramas in the country.

It’s something you don’t see every day — a giant robot relaxing in the quad of a major American university. But there she is, Goldie the Fallen Robot, right in the middle of Woods Quad on the campus of the University of Alabama. The 23-foot-long rusty sculpture represents the collapse of Birmingham’s steel industry and was crafted from scrap iron forged at the Magic City’s Sloss Furnaces. The name was discovered by sculptor Joe McCreary on one of the pieces of steel he was using to make the sculpture, apparently having been scribbled on it by an ironworker.

About 2 miles north of Goldie in the town of Northport, you will find Rusty the Big Red Dog eagerly awaiting you at Stephens Studio & Gallery. The scrap metal dog was sculpted by Larry Godwin for his father’s feed store in 1983. Today, the giant, happy pup invites visitors in to see other large sculptures like a giant robot made of cinder blocks and a giant monument to fire ants. Really!

While in the Tuscaloosa area, head to the Free — the Innisfree Irish Pub, that is. Described as a “place to have fun and forget your troubles,” Innisfree is your quintessential Irish pub with a big lineup of imported and domestic beers and great American food as well as Irish fare including shepherd’s pie and fish and chips.

This is one easy keeping zoo — there are no animals to feed, because they are all made of stone.

In the early 1970s, someone dropped off a rock at Leonard Dawson’s farm in Fackler. Dawson picked up a brush and painted it to look like a rooster. Poof! The rock zoo was born.

Today, visitors stop on the side of County Road 32 to see the rock cows, rooster, turkey, and more. Just remember to follow the rules and don’t feed the animals!

Just down the road from the Rock Zoo is the incredible Neversink Cave, a vertical 162-foot cave that has a stunning ribbon waterfall that flows into the abyss. You must have a special surface permit (available on the Save Your Caves website) to hike the steep mile-long out-and-back trail to view the waterfall. The permit only allows you to hike to the falls — caving is not allowed. And when you arrive, use extreme caution near the rim of the falls. It is dangerous.

What goes up must come down, right? Not necessarily — at least not on Gravity Hill Road. Come to the stop sign where Gravity Hill Road meets U.S. 280 (have your car facing south toward U.S. 280), make sure there no one is behind you, put your car in neutral, and then take your foot off the brake. Your car will start rolling backward uphill! Be sure to keep your foot close to the brake, because you will pick up speed.

Is it an optical illusion, or are you really defying gravity? Try it out, and you be the judge. It’s really fun.

Pro Tip: There is a similar attraction in Pennsylvania. Read more about it here.

To honor the musicians who created the famed Muscle Shoals Sound that formed the base for many great rock songs from the 1950s to today, an 18-foot tall aluminum statue of Elvis Presley, complete with neatly coiffed hair, microphone, guitar, and swiveling hips, was created by local artist Audwin McGee for the town of Sheffield in 2012. A similar statue was created in Muscle Shoals proper in 2014, but this is the original and is a must-see.

She was America’s second astronaut. Actually, she was our second monkey-naut. In the early years of the manned spaceflight program, NASA needed to determine how space travel would affect the human body. To do this, they launched two monkeys — Miss Able and Miss Baker — into space. Miss Baker was a squirrel monkey who did remarkably well on her trip and became a worldwide celebrity upon her return, greeting visitors at Cape Canaveral for many years before being moved to the U.S. Space & Rocket Center in Huntsville. Miss Baker lived to be 27 years old, making her the oldest known squirrel monkey in the world.

Miss Baker was buried near the entrance to the center with a tall granite marker. Many visitors bring along a banana and place it on top of the tombstone to honor this early hero of the space program.

For more than 15 years, Key Underwood and his beloved coon hunting dog, Troop, spent their days hunting at their favorite camp in the town of Cherokee. On Labor Day, 1937, Underwood bid a sad farewell to his beloved hunting companion and buried him at their hunting camp. Soon after, other coon hunters began burying their dogs there as well, and today, there are 185 dogs in this small plot located on Coon Dog Cemetery Road. Years later, Underwood was asked by a reporter why only coon dogs were allowed in the cemetery. Underwood replied, “You must not know much about coon hunters and their dogs if you think we would contaminate this burial place with poodles and lapdogs.” 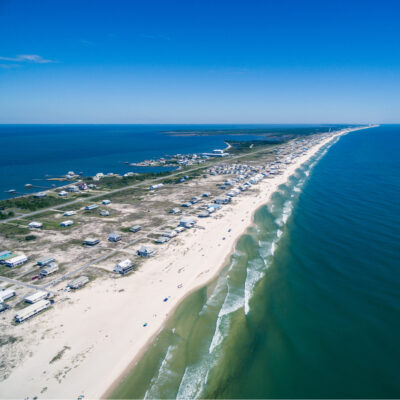 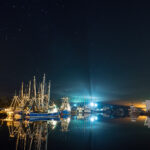 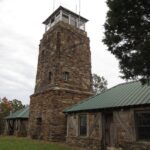 AlabamaExploring Flagg Mountain, The Greatest State Park That Never Was