9 Must-See Attractions Along Interstate 70 In Kansas

People often complain about Kansas, saying that there’s nothing to experience in the state but one long drive on the interstate. The next time you drive through Kansas, I recommend including a few stops along the way to help break up the monotony. Not only is it a fun way to stretch your legs, but you’ll see some surprisingly impressive attractions, too.

With about a dozen communities making up the Kansas I-70 Association, a drive through Kansas offers some excellent areas to check out. Here is a look at nine outstanding stops along Interstate 70.

The Kansas side of Kansas City is definitely worth a stop on your Interstate 70 road trip. You can enjoy a leisurely stroll through Kaw Point Park and learn about Lewis and Clark’s famous expedition through the area. The path along the Missouri River also offers a nice view of the skyline of Kansas City.

Downtown Kansas City is notable for its Avenue of Murals, a look at the city’s history as told by artists. Eight building-size murals celebrate the city’s newspaper, Hispanic culture, and Native American history, among other things. Kansas legends, such as Amelia Earhart and Wyatt Earp, are celebrated on the city’s sculpture walk.

For an outdoor shopping adventure, Legends Outlets is ripe for exploration, with more than 100 quality outlet stores, restaurants, and entertainment options.

Considered one of the “Eight Wonders of Kansas Commerce,” the Moon Marble Company sells handmade marbles, retro toys, and games. You can watch marbles of all sizes being made by world-class glassblowers. The shop began as a woodworking shop making games, but the owner realized he needed marbles for some of the games, so he eventually started making his own. The marbles became so popular that the store eventually developed into a marble and toy shop. You’ll spot all kinds of games and toys from your childhood.

History buffs may enjoy a stop at the nearby Wyandotte County Historical Museum, where you can learn about the area through a series of exhibits featuring everything from Native American artifacts to a horse-drawn fire engine.

Located on the campus of the University of Kansas, the Robert J. Dole Institute of Politics traces the life and career of the former Kansas United States senator and presidential candidate, including his childhood in Russell, Kansas, and his military career in World War II. The center also hosts special exhibits and events on American politics. Built from Kansas limestone and granite, the modern building is an architectural marvel and includes a 29-foot-tall U.S. flag mosaic.

Also on campus, the Allen Fieldhouse is considered one of the best arenas in college basketball. A tour of the arena and its museum is a must for any sports fan, with exhibits highlighting college sports greats like Wilt Chamberlain and Gale Sayers. A special exhibit recognizes James Naismith, who invented basketball, and even includes audio of the former Kansas coach explaining the rules of the game.

Pro Tip: About 20 minutes northwest of Lawrence, Lecompton once served as the Kansas capital. You can learn about the town’s history and check out key buildings on a walking tour.

The hometown of former President Dwight D. Eisenhower, Abilene is now home to the Dwight D. Eisenhower Presidential Library, Museum & Boyhood Home. Having undergone a major renovation in 2019, the museum complex now features even more exhibits and displays about the 34th president and World War II hero. Plan to spend 2 to 4 hours exploring the museum, library, childhood home, and meditation chapel, where President Eisenhower and his wife are interred.

Also in Abilene is a unique museum exploring the history of greyhound racing, the Greyhound Hall of Fame. During your visit, be sure to spend some time with the two retired greyhounds. The nearby 25-room Seelye Mansion is a historical marvel and once hosted celebrities and dignitaries, including Albert Einstein. The mansion is beautifully adorned for the Christmas holiday with about 75 poinsettias and more than 750 nutcrackers.

Downtown Salina is pedestrian-friendly and home to a variety of shops, such as antique stores and gift shops. But the town’s highlight is the Salina Sculpture Tour, featuring nearly 20 fun statues.

After you’ve taken the sculpture tour, consider heading to the Rolling Hills Zoo, home to more than 80 animals, including a tufted capuchin and Siberian tiger. The zoo is also home to a museum with animal displays focusing on the Arctic, rainforests, and the Middle East.

A stop in Hays should include a visit to the Sternberg Museum of Natural History, where you’ll find a fossil of a fish inside a fossil of another fish. Discovered in a Kansas farm field, the fossils may have been the oddest acquisition of paleontologist George F. Sternberg. He is also credited with finding a complete fossil of a plesiosaur, or seafaring dinosaur. The Sternberg Museum has an impressive collection of fossils, plus interactive dinosaur exhibits that will keep you and the grandkids entertained.

Afterward, art aficionados will enjoy exploring the city’s art galleries and studios, including Stone Gallery, home to the works of artist Pete Felton. Try to spot the more than 20 sculptures around the city, including one of Buffalo Bill Cody and a buffalo, as well as the murals that depict the area’s history. A visit to Historic Fort Hays will take you back to the 1800s, when soldiers occupied the fort on the plains.

With chalk formations that are more than 80 million years old, the Monument Rocks National Natural Landmark rose from an inland sea. The attraction, located on private land at the end of a 9-mile drive over gravel roads, features formations reaching up to 50 feet.

If you have more time in the area, learn how William F. Cody got his nickname and pose for a photo next to the larger-than-life statue of Buffalo Bill hunting a bison at the Buffalo Bill Cultural Center.

The nearby Little Jerusalem Badlands State Park features trails that lead to the ancient formations overlooking the Smoky Valley.

Known as the “Christmas City on the High Plains,” WaKeeney goes all out for the holidays with a community dinner and tree lighting, a holiday festival, and even a meet-and-greet with Santa Claus on Main Street.

But WaKeeney is also home to the Smoky Valley Scenic Byway, which highlights key historical events and locations. When you’re ready to rest and relax, visit the nearby Shiloh Vineyard, where you can enjoy the scenery and some outstanding wine.

Goodland is home to the world’s largest van Gogh painting — the 80-foot-tall Sunflower. But that’s hardly the end of the quirky attractions this western Kansas town has to offer.

Home to the first patented helicopter in American history, the High Plains Museum offers a look at Goodland’s history. And the White Eagle gas station is a blast from the past, with its antique gas pumps and signs.

A few miles north of the city, you’ll find a display of grasshoppers made from farm implements.

And last but not least, Mount Sunflower, a few miles outside of town, is the tallest point in Kansas, at about 4,000 feet. If you call ahead, the staff at the National Weather Service will happily give you a tour of the facility. 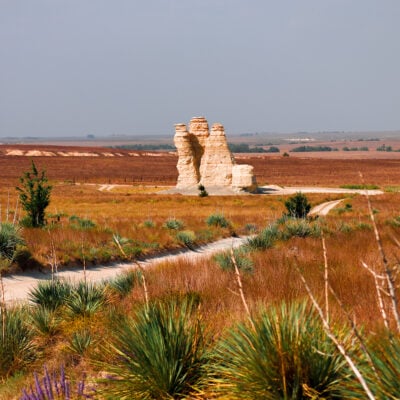 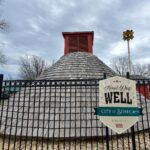