9 Best Cafes To Experience In Paris

The backbone of French culture and society, the cafe is an essential part of everyday life in Paris. You will find the familiar and comforting sight of wicker cafe chairs uniformly lining the sidewalks on almost every street corner of Paris. Inside, you will find the traditional zinc bar, where locals sip their strong coffee, straight up, one shot at a time.

No visit to Paris would be complete without spending a few hours in a cafe, so we’ve handpicked our favorites. Some are classic cafes, others have become modern institutions, and we make a few off-the-beaten-track recommendations as well.

Once the fiefdom for the Paris literary set in the heart of Saint-Germain-des-Pres, Cafe de Flore, in its heyday of the 1940s and 1950s, was the second home to legendary intellectual figures Jean-Paul Sartre, Simone de Beauvoir, and Albert Camus. Because it was so difficult to find apartments after WWII, many writers lived in minuscule hotel rooms, and Cafe de Flore would serve as their extended canteen, where they would eat, drink, and later establish the existentialist movement.

Today, Cafe de Flore is still a local legend and always bustling. Coffee is served in their signature white porcelain cups with their forest green insignia along with delicate milk pitchers. There’s a small gift shop on the lower level, so you can take home a souvenir cup and saucer, or the ultimate souvenir is a paper tablecloth illustrated by beloved artist Sempe.

The legend of Cafe de Flore comes at a price, so it’s best to have just a coffee or drink because food items here tend to be a lot more expensive than they are at other cafes.

Sometimes considered the rival literary cafe to Cafe de Flore, Les Deux Magots is another legend in its own right. Occupying its rightful spot on Place Saint-Germain, the cafe holds just as much historical significance as the Saint Germain des Pres church across the street, which is the oldest in Paris and dates back to 545. Frequented by artists, poets, and writers such as Hemingway, Picasso, F. Scott Fitzgerald, Gertrude Stein, and Alice B. Toklas in the 1920s and 1930s, Les Deux Magots retains its literary stature by giving out an annual new-writer prize.

Nowadays, Les Deux Magots is a tourist magnet but is still highly regarded by Parisians. You can spot a typical Parisian: someone who’s taking their time, reading a newspaper, and sometimes has their dog alongside.

The pastry cart is quite impressive, and another crowd-pleaser is the dark, rich hot chocolate that’s so thick you may have trouble lifting your spoon out of it.

At the opposite end of the spectrum from the classic Paris cafes, KB Cafe serves its own brand of artisanal coffee and is more in line with contemporary, global cafes that take the quality and taste of their coffee seriously — maybe more so than the cafe experience itself. Located on a busy corner of Southern Pigalle right below Montmartre, KB Cafe imports and roasts its own beans from Ethiopia, Columbia, Guatemala, and Indonesia and creates its own signature blends. Iced coffee options are also available, which is a rarity in France.

Location, location, location is what Cafe Le Nemours is all about. Situated in the open-air Place Colette, which is named after the French author who wrote Gigi, Cafe Le Nemours faces the striking, neoclassical columns of the Comedie Francaise, the most famous theater in France, which presents classic French plays. It’s also parallel to the formidable Louvre and has a view of the whimsical, metro kiosk of gem-colored glass globes designed by contemporary artist Jean Michel Othoniel.

Le Cafe Nemours is a treat for people watching, as the crowd greatly varies with people from all walks of life, from the fashionably dressed French women who stop for lunch after shopping in the designer boutiques on the nearby rue Saint-Honore to backpackers having breakfast to well-groomed businessmen in their close-tailored suits.

The croque monsieurs are excellent as are the main course salads, which include Nicoise, a veggie salad with quinoa, and a platter of farm-fresh cheeses.

A piece of fun film trivia: Cafe Le Nemours was the setting of the opening scene of the hit 2010 movie The Tourist, starring Angelina Jolie and Johnny Depp.

With two locations in prized viewing spots, the Cafe Carette on Place Trocadero is the ideal place to best view the Eiffel Tower and to enjoy the Paris cafe experience.

A hybrid of a tea salon, cafe, and restaurant, Cafe Carette has an extensive menu with pastries, sandwiches, main course salads, and French staples such as quiche, onion soup, foie gras, and beef Bourguignon. Unlike many Paris restaurants, the portion sizes are more than generous, so if your order a salad or sandwich, it may be ample food for two people to share.

What makes Cafe Carette stand out from a typical cafe is the impeccable presentation using Limoges china, starched, white napkins and tablecloths, and high-quality flatware.

Pro Tip: Visit Cafe Carette after dark, when the lights on the Eiffel Tower sparkle every hour on the hour for five minutes.

The second location of Cafe Carette is on the historical 17th-century Place des Vosges, the oldest square in Paris.

The provenance of writers James Joyce, Hemingway, and Gertrude Stein in the early 1920s, Shakespeare and Company, a stone’s throw from Notre Dame, is the oldest and most beloved English bookstore in Paris. Sylvia Beach, the original owner, was the namesake of the current owner, Sylvia Whitman, who took over the shop after her father died in 2011.

Seeking to bring the bookshop into the 21st century without marring its original ambiance, she opened a cafe next door. Just as rustic as the bookshop, the menu is akin to a California cafe, serving bagels, carrot cake, vegetarian sandwiches, and smoothies. The cafe also features a juice bar.

Make sure to leave time to browse the bookshop.

Called “the soul of Montparnasse” by Ernest Hemingway, Le Select is another cafe steeped in history. Much like its cultural counterpart, Saint-Germain-des-Pres, the Montparnasse quarter was a magnet for artists, writers, and poets from the 1920s to the 1940s. Hemingway was known to spend hours on end at Le Select, writing his soon-to-be masterpieces, and F. Scott Fitzgerald, Henry Miller, Picasso, and Chagall were also loyal customers.

Le Select is a combined cafe and brasserie, and besides serving typical cafe fare such as croissants, coffee, and baguettes with butter and jam, the menu also offers escargot, charcuterie and cheese plates, omelets, duck confit, and steak frites. There’s an expanded drink menu with aperitifs, cocktails, Champagne, and a selection of rum, cognac, tequila, gin, and whiskey cocktails.

An uber popular cafe near the trendy Canal Saint-Martin, Ten Belles was opened in 2012 by three partners: Alice Quillet, Anselme Blayney, and Anna Trattles. Ten Belles, a cozy cafe with just nine tables, is now a fixture in the neighborhood, attracting locals like bees to honey. Their top-quality coffee from Guatemala and Ethiopia is roasted just outside of Paris. The cafe offers cakes and pastries and a limited lunch menu. If there’s no room to sit in the cafe, take your coffee to go and stroll over to the scenic Canal Saint-Martin to enjoy it.

Ten Belles has two other locations in Paris, and one of them is a bread bakery.

A luxury cafe located on an extended outdoor terrace of the Louvre, Cafe Marly has a formidable view of the Louvre courtyard encompassing the museum, the glass pyramid, and the mini Arc de Triomphe or Arc de Triomphe du Carrousel. Cushy lounges, booths, and club chairs that are covered in crisp, white canvas line the terrace of towering limestone columns and mosaic tile floors.

Cafe Marly offers a full lunch and dinner menu of French and international cuisine, plus a long cocktail, drink, coffee, and tea menu.

Enjoy a cocktail while watching the sunset over the pyramid.

Unlike cafes and coffee shops in the U.S., which now have endless variations on the coffee menu, in France, there are four basic ways coffee is offered.

Most cafes serve decaf versions of these variations, and English is spoken at almost every cafe.

Does imagining the delicious bitterness of good coffee have you pining for a sweet treat? Take your caffeine to go and head for the shops of these five superb pastry chefs and chocolatiers in Paris.

CampingCampspot: Best Campgrounds Near The Water 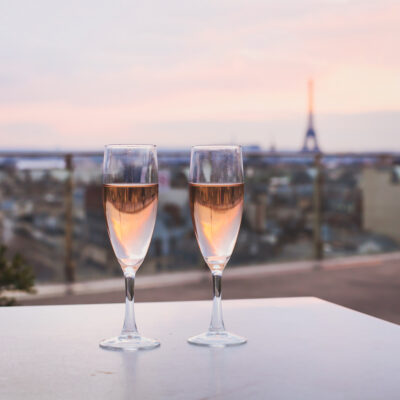