The road from Pittsburg, Kansas, to Westminster, Colorado, is one we drive regularly. The former is my husband’s hometown, which he visits for reunions with high school and college friends and with his only sibling, his sister. On the other hand, the latter is where his oldest daughter lives, so we pass by on our way home, which, for us, is Phoenix, Arizona.

The route between Pittsburg, Kansas, and Westminster, Colorado, takes us through four states: Kansas, Nebraska, Wyoming, and Colorado. On our last go-through, we decided to visit the twin national monuments on the North Platte River Valley in Nebraska. On the way to and from these two, we found eight less-known but very interesting roadside attractions. They made our road trip so much slower but also that much more exciting.

While on I-135, about 30 minutes north of Wichita, Kansas — which is 2 hours and 45 minutes west of Pittsburg — there is a sculpture at the Centennial Park in Newton, Kansas, that is stunning. In fact, it is one of the Eight Wonders of Kansas Art. Designed through the amazing joint efforts of Phil Epp, painter, and Terry Corbett and Conrad Snider, ceramists, it is made of cobalt-glazed tiles. The artwork is fluid and eye-catching, and seems to exhibit unobstructed movement toward the natural sky, achieving the artists’ goal for the piece to unite effortlessly with nature. Bill and I spent hours photographing it from many angles. It is such a beautiful piece of art.

Less than 30 minutes north of the Blue Sky Sculpture is a museum that tells the story of the Mennonites, Russian emigrants who settled near present-day Goessel, Kansas, in 1874. They were the ones who brought a winter wheat variety called Turkey Red to the United States. This variety is the foundation of the Kansas and Great Plains agricultural economy. Turkey Red wheat produces flour that contains more protein.

The Mennonite Heritage and Agricultural Museum showcases the interesting progression of farming mechanization from the 1800s to the mid-1960s in the Turkey Red Wheat Palace, which is quite interesting to know.

3. The World’s Largest Ball of Twine

Two hours northwest of Goessel, after Interstate 135 turns into Highway 81 and then, further west, into Highway 24, is Cawker City, Kansas. It is home to a ball formed of a total twine length of more than 7 million feet. Frank Stoeber started it in 1953, and when its twine length was at 1.6 million feet, which was back in 1961, he donated it to the town.

The town has made sure it continues to grow. Of course, we stopped to admire the ball and while we were doing that, a car pulled up and two ladies gave us 20 yards of twine to add to the ball. One even took our photos to commemorate our “feat.” They said that every August, there is a “Twine-a-thon” during which a lot more length is added. The Ball is one of the finalists for the Eight Wonders of Kansas.

Three hours later and further west, we saw an unusual attraction right from Highway 24. As we came closer, it turned out to be a 24-foot by 32-foot reproduction of Van Gogh’s Three Sunflowers in A Vase (sometimes referred to as Vase with Three Sunflowers) resting on an 80-foot steel easel. Artist Cameron Cross has erected three such big easels — one in Manitoba, Canada, in 1996; another in Emerald, Australia, in 1999; and this one in Goodland, Kansas, in 2001. We took pictures and checked in at our motel. After a small dinner, and despite the light showers and high winds, we returned to see it glisten in the night. The Giant Van Gogh Painting is quite a spectacle.

This was what took us off our direct route to Bill’s daughter’s home, but we wanted to visit the historic North Platte River valley. From Goodland, Kansas, we went north to Interstate 80 and then northwest on 1-26 to visit the 3,000-acre Scotts Bluff National Monument. It preserves overland trail remnants, mixed-grass prairie, and towering bluffs along the North Platte River that were an important landmark when wagons roamed the land. Over 250,000 westward emigrants passed by Scotts Bluff between 1843 and 1869. The monument’s north bluff is named after Hiram Scott, a clerk for the Rocky Mountain Fur Company who died near the bluff in 1828. It was good to set foot on such historically significant land.

Just 30 minutes northwest of Scotts Bluff and also in the same North Platte River valley, there is another prominent geological rock formation that stands 4,228 feet high. As you might have guessed, it also served as an important landmark along the trails of westward emigrants during the mid-19th century. We were glad we visited the Chimney Rock National Historic Site and the Scotts Bluff National Monument during fall. They were both lovely places with seasonal splashes of yellow.

Back on Interstate 135 and less than two hours southwest is Cheyenne, Wyoming. At the small visitors center in the railway station, we found a giant eight-foot-tall (from heel to top of the pull tabs) and eight-foot-long (from pointy toe to the back of the heel) boot. We were told that there were 20 such boots around town. With a map to guide us, we hunted all of them down. Painted by various artists in 2005 to showcase Wyoming and Cheyenne history, each was purchased by a civic-minded business to display at their location.

We almost didn’t finish our mission because it was already past 5 p.m. when we found the 20th boot, inside an already locked glass-enclosed building. We knocked and knocked and knocked. It was good somebody was working overtime, heard us, and let us in. We felt a feeling of accomplishment after taking our 20th boot photo. It was an afternoon very well spent. The Cheyenne Big Boots are so unique, colorful, and meaningful.

Less than an hour south of Cheyenne on Interstate 25 is Fort Collins, Colorado. When walking the streets of Downtown Fort Collins, the buildings, especially the Old Firehouse Bookstore, may look so familiar, like deja vu. Understandably so, because it was Fort Collins’ Harper Goff who helped Walt Disney sketch up plans for Disney’s Main Street U.S.A. Old Town Square in Fort Collins served as his inspiration. It’s a charming place to stroll around any day.

A lover of jazz, my husband, Bill, noticed an artsy piano in Fort Collins’s Jazz Alley. Later, we saw a few more. We found out that they were all part of Pianos About Town, a collaborative project hosted by the city and a number of organizations that combine music and visual art. The pianos were painted between May and October right in the Old Town Square, then distributed throughout the city, inviting people to enjoy the art and play a tune. The installations are rotated, and during the winter months, they are stored at several indoor locations. We loved this experience.

About one and a half hours south of Fort Collins is Lookout Mountain Park, part of the Denver Mountain Parks system. There, you will find the Buffalo Bill Museum and Grave. It is the one and only gravesite of William F. Cody. Born in 1846 and nicknamed Buffalo Bill because of his skill as a buffalo hunter, Cody has a nicely located grave overlooking the natural beauty of the Great Plains and the Rockies. A fitting museum was built on site to celebrate this legend of the West.

This became such a memorable road trip for us. It took us longer to go from Bill’s sister’s home to his daughter’s, however. What usually takes us two days took us four instead. Being retired, we have the time. There is really no need to rush. The two additional days were both well worth it. Because of this wonderful experience, we vowed to vary our route a little each time we go back to his hometown and visit his daughter. That will help us find new roadside attractions and hidden gems each time. 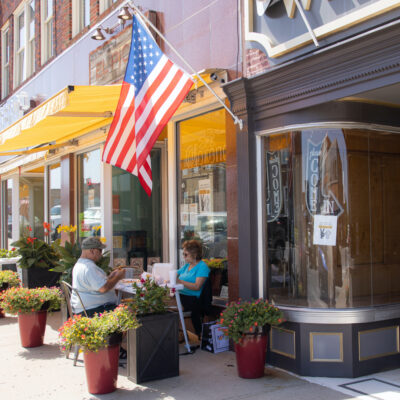 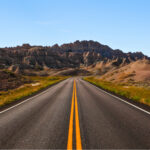 Road TripsFrom Sweet Music To Sweet Tea: These Southeast Road Trips Will Appease All Of Your Senses