Visiting Tibet: 9 Fascinating Things To See And Do

There is something about Tibet that calls to the souls of travelers. Quite literally the roof of the world, this mystical place, the real-world Shangri-La, is known for its centuries-old traditions, deeply rooted religious practices, and scenery that takes your breath away. Visitors are drawn to Tibet’s spiritual nature, embodied in hauntingly beautiful monasteries filled with the chanting of monks and exhibits of nature at scales that are truly humbling. Envision glacially blue lakes, peaks that soar to the heavens, and the rustle of prayer flags blowing in the Himalayan air — all as the looming northern slopes of Mt. Everest stand stoically in the distance. Tibet is a bucket list destination, and it’s not difficult to understand why.

To visit Tibet is to answer a mysterious call. This road-less-traveled destination is reigned by striking scenery, snow-capped peaks, and towering glaciers, making it a pristine trekker’s paradise. Because it’s more difficult to access than other destinations, its culture has remained representative of its historic roots. It’s a destination of supreme spirituality that will provide travelers a much-needed respite from the frenetic energy of everyday life.

No matter your position on Tibet’s political presence, whether it’s an occupied nation or a province of China, it cannot be denied that this is a place of everlasting beauty and tradition.

“Tibet is an ancient Buddhist society, and despite Chinese takeover of the country, the Buddhist lifestyle continues,” said Peggy Goldman, president and founder of Friendly Planet Travel, a global tour operator offering packages to Tibet and other countries. “People live their devotion to their religion, and that, in itself, is a fascination to travelers.”

To enter Tibet, all foreigners must be part of a group tour or have a private guide through a registered Tibetan tour operator. A travel permit is also required. If you’re ready to venture to Tibet, here are the most fascinating things to see, do, and eat.

It is in Lhasa that visitors will first become enamored with Tibet. Translated as the place of the gods, even the least spiritually inclined person will instantly feel an other-worldly connection in Lhasa. Gazing out over the Potala Palace, the smell of incense and the chants of slowly pacing pilgrims is entrancing. The Tibetan aesthetic that attracts so many visitors is found in Lhasa’s old town, and it is here that the journey should begin.

One of the best things about Lhasa is that it is a great destination year-round. While it sits on the highest plateau in the world, the capital city is lower than much of the rest of the region. January is the coldest and driest month, but can still feel very comfortable on sunny days. April and May are warmer, with June and July being the warmest — and the start of monsoon season. August is the wettest month, and it is possible to have rainfall almost every day, though mostly in the evenings and at night.

The first stop in Lhasa for most visitors is the breathtaking Potala Palace, which was once the seat of the Tibetan government and the winter home for the Dalai Lamas. It is the premiere site in Tibet’s capital, known for its 13 stories and more than 1,000 rooms perched atop the Marpo Ri. Be mesmerized by the sheer looming presence as it watches over the city from the seat it’s occupied since the 17th century, according to Goldman.

Keep in mind that tickets for Potala Palace are limited, so a time slot will need to be booked days in advance. This will be arranged by your guide. Remember to arrive early. Late arrivals will be denied a ticket. Potala Palace is open 9:30 a.m. to 3 p.m. November through April and 9 a.m. to 3:30 p.m. May through October. From May through October tickets are roughly $29. November through April they are roughly $15.

The Dalai Lamas have served as political leaders, and the current Dalai Lama, Tenzin Gyatso, was exiled from Tibet in the 1950s after a failed uprising against China. Today, while the 14th Dalai Lama cannot step foot in Tibet (he lives in India), Tibetan Buddhists remain loyal to him.

All that being said, Norbulingka is the former site of the Dalai Lama’s summer residence and gardens and is a deeply significant place for Tibetan Buddhists and visitors alike. Norbulingka translates to treasure garden. It was originally built in the mid-18th century and has undergone many expansions over the years. Today it is the world’s highest garden. In 2001 UNESCO extended it World Cultural Heritage recognition as part of Potala Palace, which is less than two miles away.

Set your internal rhythm to the pulse of spiritual Tibet with a stop at Jokhang Temple, a nearly 800-year-old temple that has been the ending point of pilgrimages for centuries. Its golden Buddha image is one of the most important relics for Buddhists around the world. Jokhang was built in the seventh century and is made up of courtyards, monks’ quarters, and temples.

Mount Kailash is one of the most impressive mountain peaks in Tibet. Not only is its sheer size humbling, it also holds deep religious and cultural significance for practitioners of the four main religions in Tibet: Hinduism, Buddhism, Jainism, and Bon. Because of this, the base of the mountain is the end point of pilgrimages for thousands of people each year.

Each religion has its own beliefs regarding the sanctity of the mountain. Hindus believe that it is the throne of Shiva, while Jains believe it is the spot where Rishavdev achieved nirvana. Buddhists in Tibet believe the mountain is the home of Chakra Samvara Demchog. Given the sacred status of the mountain, climbing is forbidden. Instead, pilgrims make their way in a clockwise motion around the mountain’s base, following a path known as a kora.

To visit Mt. Kailash, you’ll go through the otherwise unimpressive town of Darchen. It’s the main point of entry for those who set off on the kora.

Tibet is already considered an off-the-beaten-path destination, but it’s possible to go even more rogue once you’ve arrived. The lesser-visited province of Kham is one of the most spectacular and under-appreciated areas of the entire Tibetan plateau.

“I have been trying to shift perceptions for years now to inspire people to look beyond the obvious and discover some of the most beautiful scenery, wonderful monasteries, and esoteric festivals to be found anywhere in Asia,” says Adrian Bottomley, managing director of Whistling Arrow, a travel company that specializes in Asia treks and expeditions.

Visits to Kham are based in Eastern Tibet, home to a rich Tibetan artisanal heritage, stunning hilltop villages and monasteries, and surroundings that are awe inspiring. Bottomley arranges immersive access to the community, a visit with nomads in the sacred valley of Dolpu, and plenty of opportunities for hiking, horseback riding, yoga, and meditation.

On the bank of the Brahmaputra River, visitors to Tibet will discover the Samye Monastery, which is actually the longest-standing monastery in Tibet according to Goldman. It was built in 775 A.D. by King Trisong Detsen, and is known for its intricate mandala design. The main hall, which is called Utse, represents Mount Meru, which is the center of the universe according to Hindu mythology. The monastery spreads out from there, with outer temples representing earthly features like oceans and continents, as well as aspects of the Buddhist cosmos.

“[Samye] is architecturally interesting because it combines architectural styles of three cultures: China, Tibet, and India,” says Goldman. “The art and artifacts contained in the monastery, particularly the frescoes, are very interesting to our passengers and to visitors from around the world.”

While Tibet is rich in culture, history, and spirituality, it leaves something to be desired for foodies. Food in Tibet is predominantly for sustenance and survival, and it’s not often you hear of travelers venturing to Tibet to relish in Tibetan cuisine. That said, visitors to Tibet can find wonderful Indian food, as well as Sichuan cuisine. Of course, there are several dishes that are indicative of traditional Tibetan cuisine and ought to be part of anyone’s itinerary.

This is the most basic of Tibetan dishes, made from barley dough and yak butter (another Tibetan staple), mixed with water, tea, or beer. The dough is then kneaded into balls, or mixed with milk powder and sugar for a trek-fueling porridge.

This classic Tibetan noodle dish is served with vegetables, beef, and scallions. It’s a traditional breakfast dish in Tibetan cities, especially when the weather turns colder. Dress it up with pickled radish and chili sauce for additional flavor.

These small, steamed dumplings, filled with yak meat or vegetables, are common in Nepal and Tibet. Garnish with chili sauce and enjoy.

Shopping in Tibet is usually best in its cities. Countryside destinations tend to be impacted by their remoteness, so goods are limited. Lhasa is well-equipped for shoppers, most of whom are buying local handicrafts or goods for trekking.

Barkhor Supermarket is the most popular shopping center, where visitors can buy Buddha figures, rosaries, wooden bowls, jewelry, and more. The building itself lacks charm, but inside its three-stories, travelers will find a comprehensive example of what can be bought in Lhasa.

There is also Tromsikhang Market, a bazaar situated in the old city of Lhasa, where you can find dried fruits and nuts, dried yak cheese, yak butter, and other traditional grocery products.

If you want to invest in local crafts, Tibet is known for its masks and opera costumes, as well as homespun Tibetan rugs according to Goldman. Tibet Gang Gyen Carpet Factory, located in Shigatse, is a unique place to discover these local crafts. The workshop employs only women and visitors can come watch the process of weaving, dyeing, trimming, and spinning. Keep in mind that buying these local treasures is not a cheap affair. Expect to pay around $1,000, including shipping, to get a 4-foot-by-6-foot rug home. 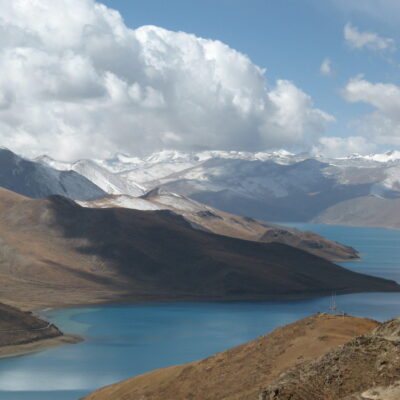