7 Churches And Temples You Have To Visit

These religious sites, from large churches to modest, but significant chapels and mosques, provide an insight into how we worship and the role of spirituality in human history. Here are seven places of worship to put on your next vacation itinerary.

Places are really about people. But in the case of Sedlec Ossuary, the place is quite literally made of people.

For reference, an ossuary is a place where the bones of the dead are stored. At Sedlec, the decision was (somehow) taken to decorate the entire chapel with human bones. As macabre as it is fascinating, the collection includes bone cups, a bone chandelier, even a rather striking bone coat of arms.

While not for the faint of heart, the Sedlec bone collection dates from the 1870s, and it will definitely send a chill up your spine — if that’s the sort of experience your spine is up for.

More extraordinary than the church itself (which dates from the 10th century AD), is the mound upon which it was constructed. The Chapel of Saint-Michel was constructed atop a 280-foot volcanic plug, which had been a site of local worship for centuries. But be prepared to climb: you’ll have to reach the church via a series of 270 steps etched into the rock itself. But the views of the surrounding hamlets are lovely, and the chapel itself is sufficiently historic to warrant a little climbing.

3. Reading Between the Lines, Borgloon, Belgium

Constructed by two cheeky architects in a field in Belgium, this is a church you can look right through. It was built using a hundred or so layers of razor thin steel, which causes an unusual optical illusion at ground level: the church is at least partly see-through, offering a glimpse of the trees and valleys beyond.

Supposedly, this is a commentary on the ambivalence of Western European society to its churches. On the one hand, there is an incredible legacy of faith and architecture in all the old cities of Europe, but on the other hand society is increasingly secular.

Reading Between the Lines offers no services or sacraments, but you are free to pray there in any manner you wish. Religious or not, it’s a compelling mirage.

Legend has it that in 1754, an Amerindian woman and her young daughter were caught in a storm in Colombia near the Guaitara River and witnessed an apparition of Mary, the mother of Jesus. The presence of the Virgin calmed the woman and her daughter, and some even say that the woman revisited the site some time later when her child was deathly ill. At that second visit, the child was miraculously healed, according to the legend. This story was embraced by locals, who enshrined the area and constructed houses of worship at the site in the 1800s. The current massive and ornate Las Lajas Sanctuary was constructed between 1919 and 1949 and was designated a minor basilica by Rome in 1994.

Famed American architect Frank Lloyd Wright designed several iconic structures, from the Guggenheim Museum in New York City to a host of impressive residences. He only designed one synagogue in his career, however, in Philadelphia. The Beth Sholom Congregation in Philadelphia is not only a temple to God but also a shrine to Wright’s architectural significance in America and the world.

The most massive Hindu temple in Indonesia, the Prambanan in Central Java dates to the 9th century. The site has UNESCO World Heritage designation and is a complex of 240 separate temples. The entire place is a shrine to both Shiva and Buddha as well, an inspiring example of two religions peacefully coexisting in one sacred site.

The religious history of Italy is dense and pervasive, from ancient Roman temples to the spiritual and artistic grandeur of Vatican City. But one of the most impressive churches is the beautiful Duomo, in Florence. This cathedral was built in the gothic style from the 1200s to the 1400s and its iconic dome is the largest brick structure of its kind. It’s built upon the ruins of an even older church, the 7th-century church of Santa Reparata. Visitors can also see the ruins of this ancient church as part of a Duomo tour. The Duomo’s exterior is gilded in white, pink and green marble, and its stark but vast interior is adorned with intricate mosaic tiled floors.

Religion has historically played a vital role in the development of civilization. Religious sites are impressive to visit, and they can teach us about religion – either those with which we identify or those of other cultures. These sites contain some of the richest examples of human history since community and collective worship has guided the people of every nation. 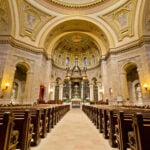 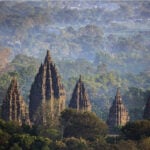