9 Must-Visit Religious Sites In The Midwest

Religious sites across the Midwest attract visitors for their spiritual, historical, cultural, and architectural significance.

You can pay your respects and fulfill your religious obligations during a visit, but even if you’re not particularly religious, you can simply admire the beauty of the structures and learn about their rich histories.

While the following destinations are especially popular during the Easter and Christmas seasons, they are worth visiting at any time of year.

As you take in the majesty of the Cathedral Basilica of Saint Louis, you’ll feel like you’re in Rome. The basilica is both an architectural and historical marvel. Completed in 1914, it serves as the seat of the Archbishop of Saint Louis, and Pope Saint John Paul II designated it a basilica in 1997.

More than 41 million colorful pieces of glass decorate the sanctuary and its side chapels. In fact, the basilica is home to the world’s second-largest mosaic collection. Be sure to check out the All Saints Chapel, which features elaborate Italian-style mosaics by Louis Comfort Tiffany.

During your visit, don’t miss the lower-level museum dedicated to the history of the mosaics, as well as the crypts where three cardinals and an archbishop are entombed.

Guided and self-guided tours are available daily. If you’d like a guided tour, call ahead and reserve one. They take place from 10 to 4 p.m.

Pro Tip: After spending an hour or so at the basilica, head to the Soulard neighborhood for some authentic Cajun food at Broadway Oyster Bar. There are oysters aplenty, as well as Cajun favorites such as a lobster po’boy, gumbo, and jambalaya and unique dishes like lobster mac and cheese and crawfish enchiladas.

2. Cloisters On The Platte, Gretna, Nebraska

At the Cloisters on the Platte near Gretna, Nebraska, you can follow the path Jesus trod as he carried his cross to Calvary. Life-size bronze Stations of the Cross tell the story of Jesus’s painful journey, starting with his condemnation by Pontius Pilate and ending with his entombment. Each stop includes an audio description.

Created by artists from around the country, the sculptures are remarkably realistic and stand about 7 feet tall. You can almost feel the suffering Jesus endured.

The Stations are located on the grounds of a retreat house that opened in 2018; they are open to the public from Monday through Thursday. While admission is free, a $10 donation is requested. Park in the public parking lot, where a shuttle bus will pick you up and take you to the grounds.

Pro Tip: Following your visit, head to Round the Bend Steakhouse in Ashland, Nebraska, for outstanding home cooking. Start with an order of fried corn fritters or mountain oysters. Then enjoy a hand cut and aged steak, pork tenderloin, country-fried steak, or delicious burger.

3. Shrine Of The Grotto Of The Redemption, West Bend, Iowa

The Grotto of the Redemption is open 24 hours a day and is free to visit. West Bend is located about an hour north of Fort Dodge, Iowa.

The magnificent Saint John’s Bible, a 10-year project commissioned in honor of the new millennium, is perhaps the world’s most beautiful contemporary example of calligraphy and illustration. Numerous artists and calligraphers worked on the project.

Folios are on display at the Saint John’s Bible Gallery on the campus of Saint John’s University in Collegeville, Minnesota. The gallery also houses Bibles in different languages, including Polish and Gaelic.

While at Saint John’s, which is about a 90-minute drive northwest of Minneapolis, visit the campus church, which features a unique stained glass exhibit. With about 425 panels of geometrically designed stained glass, the church is an attraction in and of itself. Outside, five bronze bells ring throughout the day.

Pro Tip: After your visit to Collegeville, head to nearby Saint Joseph, Minnesota, for an authentic Italian meal at Bello Cucina. Try the spaghetti and meatballs, chicken Parmesan, pizza, steak, or fish.

5. Grotto Of Our Lady Of Lourdes, South Bend, Indiana

Located on the campus of the University of Notre Dame in South Bend, Indiana, the Grotto of Our Lady of Lourdes is a replica of a larger one in Lourdes, France, where Catholics believe the Virgin Mary appeared to Saint Bernadette 18 times in one year. The university’s founder, Father Edward Sorin, vowed to build the grotto after making a pilgrimage to Lourdes.

Built with stones from nearby farms — and one stone from Lourdes — the South Bend grotto attracts visitors and pilgrims daily. It often hosts outdoor Masses, and the faithful pray the Rosary there daily. Visitors can also light candles in honor of their departed loved ones.

Located on the Mississippi River, Historic Nauvoo in Illinois was the home of Brigham Young and the first members of the Church of Jesus Christ of Latter-day Saints (Mormons) before they settled in Salt Lake City, Utah. A guided or self-guided tour will take you to key historic buildings in Nauvoo, including Brigham Young’s home. Afterward, head uphill to visit the LDS temple, which offers an impressive view of the town and the Mississippi River.

Pro Tip: Following your visit, take a short drive south to Hamilton, Illinois, where you can enjoy a unique breakfast treat at any time of the day at the Hamilton Family Cafe. The Harold — with scrambled eggs, hash browns, and biscuits and gravy tossed on top of each other — is a solid choice. Broiled chicken breast, chicken-fried steak, and liver and onions are also available.

7. National Shrine Of Our Lady Of The Snows, Belleville, Illinois

Located less than 10 miles southeast of Saint Louis, the National Shrine of Our Lady of the Snows honors the Virgin Mary. The shrine, which was constructed about 60 years ago, is home to several attractions, including Stations of the Cross backed by fir and pine trees, a Lourdes Grotto, memorials dedicated to fathers and mothers, and a Resurrection Garden. Visitors can light a candle at the 85-foot-tall Millennium Spire. The complex also features an apartment building, restaurant, and gift shop.

If you visit during the Christmas season, you’ll be treated to one of the most extensive light displays in the Midwest.

Pro Tip: Fletcher’s Kitchen & Tap is a great choice for dining after your visit to the shrine. It offers burgers, pizza, sandwiches, and salads.

The cornerstone of the grand beaux arts Cathedral of Saint Paul was laid in 1907, and the first Mass was celebrated in 1915. The cathedral can seat some 3,000 people. Some of the cathedral’s most notable features include its copper dome and Stations of the Cross, and its lovely Shrine of the Nations honors saints from around the world. The cathedral also features five bronze bells that ring throughout the day.

Pro Tip: Following your visit to the Cathedral of Saint Paul, stop at Matt’s Bar for a chance to enjoy the city’s famous Jucy Lucy burger. The cheese is inside the meat rather than outside it. Once the burger arrives at your table, wait a few minutes before taking your first bite to give the burger a chance to cool down.

Trinity Heights honors both Jesus and his mother. The 14-acre attraction is located on the grounds of a former college and high school in Sioux City, Iowa. At the ends of the garden stand stainless steel statues of Jesus and Mary, each more than 30 feet tall. You’ll also find Stations of the Cross and sculptures of Saints Peter and Paul, Moses, and the recently canonized Mother Teresa.

At the center of the property is the visitor center, home to a 22-foot-long, wood-carved Last Supper, created nearly 30 years ago by a local artist who used his family and friends as models.

Pro Tip: After your visit to Trinity Heights, head to Taqueria La Juanita for authentic Mexican food. Part of the experience is standing in line (for a short period) to order at the counter. Enjoy the burritos, enchiladas, or tacos. Note that Taqueria La Juanita only accepts cash. 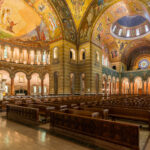 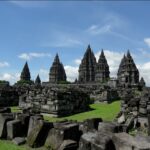