The Rocky Mountains’ Teton Range is famous for its dramatic views; mountains seem to spring up from ground level with very little transition. When my husband Dean and I drove into Grand Teton National Park for the first time, we expected to see the impressive, towering mountains, wide open spaces, and pristine lakes, but we didn’t expect to see a beautiful, paved bike trail that runs parallel to the popular Teton Park Road and the Grand Tetons themselves.

We love to bike. It’s one of our favorite activities in our home state of Minnesota and the neighboring state of Wisconsin. How could we not know about this?

Surprisingly enough, there are several cycling options in Grand Teton National Park. We chose a Moose to South Jenny Lake roundtrip. Here are our tips to get the most from the ride.

Note: When we visited, high-altitude smoke from West Coast wildfires cast a haze in the sky, so the mountains in these photos aren’t as crisp and clear as they’d otherwise be. Still beautiful!

We learned that the paved, multi-use path we had seen on the drive into the park was the Grand Teton Pathway, which extends from the town of Jackson (where we were staying) in several directions.

After reviewing the map (PDF) and options, we thought biking right along the Grand Teton mountain range (with elevations of up to 13,770 feet) was surely the cream of the crop! We decided to do the 7.3-mile ride from the town of Moose to South Jenny Lake, and back to Moose.

If you go to Grand Teton without a bike, the first task will be renting one. Fortunately, Adventure Sports at Dornan’s is ready to help. Dornan’s is a family-run resort in Moose and is located just off the Grand Teton Pathway. They rent bikes by the hour (there was a 2-hour minimum when we rented), which was a great way to go, since we didn’t know how long it would take us and we were in no rush.

Pro Tip: The multi-use pathway is closed from dusk to dawn because of wildlife and for public safety. Other than service dogs, pets are not permitted.

3. Take In the Views Crossing The Snake River

Soon after leaving Dornan’s, the pathway crosses the Snake River, the largest tributary of the Columbia River. Bike onto the long bridge and stop to take in river views. Check upstream and downstream for wildlife.

The bike trail was largely flat and took us through large sections of sagebrush. On the park website, I learned about an effort underway to replace approximately 4,500 acres of former non-native grass fields with native sagebrush steppe habitat. “A healthy sagebrush ecosystem in Grand Teton is vital for the diversity and abundance of native plants and wildlife species like elk, bison, moose, pronghorn, and sage grouse that rely on them.”

We had a beautiful day for this ride. We stopped if we saw something of interest or if I wanted to take more photos. At one point, we passed the trailhead for the beautiful Taggart Lake hike — but that was another adventure for another day.

Until recently, buck and rail fences, or buck and pole fences, were commonly found throughout Grand Teton National Park. We did see some on the bike pathway, and I loved seeing these old-fashioned fences, reminiscent of days gone by.

7. Traverse Bridges Along The Way

The pathway crosses several creeks and bridges that will carry you over the water. I liked seeing the variety along the trail and appreciating the natural beauty all around us as we rode.

8. Honor The Memory Of A Teenager

At southern Jenny Lake, almost to our turnaround point, we saw a simple sign that was a tribute to Gabriella Axelrad, a 13-year-old teen who died in a car/bike accident along Grand Teton Park Road in 1999. Her tragic death was part of the impetus for more off-road biking trails in Grand Teton National Park. Something beautiful was made from something so sad. It made me think of how much I have to be grateful for.

South Jenny Lake was the turnaround point for our bike ride, and since we had already hiked around part of Jenny Lake earlier in our stay, we turned around to start biking back to Moose.

If you take this ride and haven’t yet explored Jenny Lake, there’s plenty to see and do there. It’s a great spot to talk to a ranger (often found at the visitor center), hike, check out the gift shop, and take in more sweeping mountain and lake views.

Pro Tip: We didn’t do this, but I see there’s a Grand Teton National Park app and a Jenny Lake Explorer app available for free download, which could also be helpful.

The pathway runs parallel to the busy Teton Park Road, a popular place for wildlife sightings. Of course, there are no guarantees, but we saw pronghorn and elk on this stretch of road during our time in the park. If there is a wildlife sighting, you’ll be able to tell from quite a distance since cars will be pulled over and people will be clamoring to get a photo.

Pro Tip: Per the safety tips on the park website, “Animals may be on or near roads or the multi-use pathway. Never feed, approach, or harass a wild animal. Maintain a distance of 25 yards from bison, elk, moose, and other animals, and a distance of 100 yards from bears and wolves.”

11. Extend Your Biking To Jackson

If you’re feeling ambitious, don’t return the bikes quite yet. Stay on the Grand Teton Pathway past Moose and turn right (south) to bike on the multi-use trail another 13 miles to Jackson.

Once in Jackson, don’t miss (not that you could) George Washington Memorial Park, more commonly known as the Jackson Town Square, which has a dramatic elk antler archway at each of its four corners. Jackson also has great shops and restaurants to explore.

Bonus: Stop At The Chapel Of The Transfiguration

After we returned our bikes to Dornan’s, we drove to the nearby Chapel of the Transfiguration, a small log chapel built in 1925, also located in Moose. It’s been called “a spiritual heart in the park.”

The chapel is positioned on the land and designed so that, from inside, you can look through a large window past the altar and see a “framed” view of the Cathedral Group of peaks in the Grand Tetons. We visited the park in September 2020 and took photos of the outside, but unfortunately, no one was allowed inside due to COVID-19.

I never expected to bike at Grand Teton National Park. We had heard about the Jenny Lake hike and boat ride, and we ended up doing some great hiking at Taggart and Bradley Lakes, but I never thought biking would even be a possibility.

Our national parks are treasures, full of unexpected surprises and delights. When you go, I think you’ll like this easy bike ride along the mountains. It’s filled with wonder, and these tips will help you get the most from it.

Pro Tip: If you go in spring, know that the pathway opens only after the snow has melted and maintenance workers have swept it. Also, the section of the pathway from Jackson’s National Elk Refuge to Gros Ventre Road is closed from November 1 to April 30 because of elk migration. 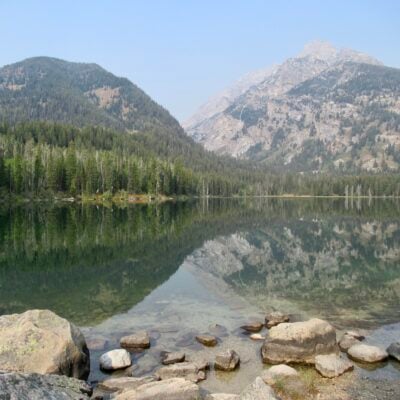 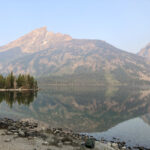 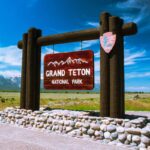 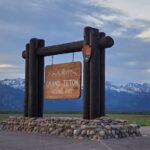