8 Unique Mail Runs To Experience Around The World

Tag along with a postie for the day. “Neither snow nor rain nor heat nor gloom of night stays these couriers from the swift completion of their appointed rounds.” These words are associated with the American postal worker. But even tougher mail deliveries worldwide rely on boats, seaplanes, four-wheel-drives, and athletic teenagers.

Tourists love to join in on these remote scenic delivery routes that provide chances to meet locals who have little contact with the outside world. After the thrill of my first mail run tour in Australia, I found myself seeking out these unique tours in all corners of the world. Here’s what I found.

The Coober Pedy Mail Run tops the list of Outback adventures. Some tourists describe the experience as the highlight of their trip Down Under. Australia Post contractor Peter Rowe is usually the driver and guide. He takes his four-wheel-drive twice weekly on unsealed roads through red desert sands beginning in Coober Pedy — South Australia’s world-famous opal mining town where half the population lives underground. This otherworldly moonscape, known as Moon Plain, has captured the imagination of apocalyptic filmmakers in films like Red Planet and Mad Max Beyond Thunderdome.

The Oodnadatta Track follows an ancient trail used by Aborigines for ochre trading. European explorers used the route to build the Overland Telegraph and the Old Ghan railway lines in the late 19th century. The trip takes around 13 hours with stops for meals at William Creek, its population of 10, the legendary bush pub, and Oodnadatta.

The service delivers mail to a number of homesteads, including the world’s largest cattle station — Anna Creek Station — which is bigger than Israel. The locals love a yarn and a laugh, and tourists meet some amazing characters who call the Outback home. The trip stops at scenic points including the Dingo Fence (the longest fence in the world) and ruins connected to the Old Ghan railway.

Magnificent homes skirt Geneva Lake. Back in 1916, when primitive roads were too difficult to traverse, mail here was delivered by boat. The residents possibly no longer need this service, but the much-loved tradition continues.

Tourists love seeing the huge mansions and learning about the area’s history. But most eyes are on the jumpers, or young athletic students who leap from the boat. Will they land safely or make a splash?

With a delivery schedule of up to 70 homes, the mail boat — named the Walworth — does not stop. Runners make spectacular leaps from the moving boat onto the private docks, race to mailboxes, and dodge trip hazards before jumping on-board the vessel that has already left.

Despite possible drenchings, becoming a jumper is a coveted job with competitive tryouts every spring. Only a few contenders are sure-footed and agile enough to land this valued summer job.

The Walworth departs at 10 a.m daily from mid-June to mid-September for the 2.5-hour tour. You can find details at Lake Geneva Cruise Lines.

The Hawkesbury River is bordered by national parks. The Riverboat Postman mail run makes it easy for tourists to join the fun. Simply catch a train from Sydney Central to Hawkesbury River Station. Brooklyn Wharf, the departure point, is next door to the train station.

The Riverboat Postman has been delivering mail to water-access-only properties since 1910 and is the last mail boat run in Australia. River residents have had their mail delivered every weekday, despite rain, hail, or high water. These days, the mail is delivered by Hawkesbury Cruises.

At each pier, there’s usually an excited dog eager for its owner and a treat. Although not everyone is social, a reclusive fisherman leaves a fishing hook on a wooden pole in the middle of the river. If he’s got mail, it gets left in a bag on the hook.

It’s a lazy trip up the meandering Hawkesbury and a delightful way to experience a landscape much loved by artists and writers who love their isolation. On a visit to Australia in 1873, the novelist Anthony Trollope wrote: “The Hawkesbury has neither the castles nor islands nor has it bright clear water like the Rhine. But the headlands are higher, and the bluffs are bolder, and the turns and maneuvers of the course which the waters have made for themselves are grander and, to me, more enchanting than those of either the European or American river.” And so the river remains today.

Trips depart at 10 a.m. on weekdays, except on public holidays, and coincide with the train’s arrival from Sydney. They include morning tea with famous Anzac biscuits — a ploughman’s-style lunch — and there’s a bar on-board. Co-owner Catherine Pignéguy said, “We are a true Aussie small business, locally owned and operated; all the crew live locally as well.”

Pro Tip: Extend your stay with one of the boat-only accessible accommodation options.

The Pelorus Mail Boat has been operating since 1918. It sets out 3 days a week from the little town of Havelock at the top of the South Island to cruise through the stunning Marlborough Sounds — a collection of ancient sunken river valleys filled by the waters of the Pacific Ocean. Forested hills rise steeply from the sea around an intricate coastline of sheltered inlets and sandy bays.

Families that live in these pristine bays and inlets come down to collect their mail. Some live so remotely that they have no road access and their groceries and gas bottles are delivered. They collect their supplies in small boats or from the end of moorings. One expects a few dogs, but these locals bring their sheep, goats, and pigs — after all, this is New Zealand. It’s a hoot for tourists. Cruises last 5–6 hours, depending on deliveries. There are three different but equally scenic routes. There’s also a bring-your-own picnic lunch available in Havelock.

New Zealand is divided into two main islands — the North and South Islands. Akaroa, 50 miles from Christchurch on the South Island, was the country’s only French-founded settlement — albeit short-lived. The quaint township trades on its “Gallic heritage” with its wineries, bistros, cafes, and street names.

Behind Akaroa lies the extinct volcanic crater rim of Banks Peninsula. Join Jeff and Suzi Crawford on Akaroa’s Eastern Bays Scenic Mail Run, a tour that has been operating for over 30 years. Some do this mail delivery tour as a side excursion from the cruise ships that dock near Akaroa; others are touring New Zealand. The bright red mail van cuts a jaunty profile against the green swathes of pastures flecked with white sheep and contented cattle. The blue water-filled crater forming the bay twinkles below.

The scenic rim would be a daunting drive for tourists, but for Jeff, the drive is second nature while he fills tourists in on the area’s fascinating natural and social history. A favorite stop is a visit to a historic church, after which guests enjoy Suzi’s tasty homemade baking. There are plenty of photo opportunities! Enjoy 5 hours amongst some of the most stunning scenery imaginable.

Vancouver is surrounded by water, and tourists love watching seaplanes splash land in the harbor. Here’s an excuse to fly in one. Seaplanes have historically figured large in the delivery of mail in these parts. A Mail Run Harbour Air tour involves harbor hopping. See BC’s beautiful Gulf Islands from the air, skipping from one picturesque coastal community to the next. Experience taking off and landing in quaint harbors like Maple Bay and the seaside village of Ganges on Salt Spring Island with its artisan producers and organic vineyards.

The tour is customizable; anything from a 3-hour “island-hopping” adventure to a full-day trip with a stopover on Salt Spring Island. Rather than delivering mail, the tour is based on mail routes of yesteryear and ranks as a Canadian Signature Experience. It’s a once-in-a-lifetime excursion by Canadians who are passionate about sharing their part of the country with tourists.

Another option, CorilAir at Campbell River on Vancouver Island, still delivers mail in a De Havilland Beaver or Cessna float plane over British Columbia’s most remote and beautiful scenery. It also stops at one of Canada’s remaining floating post offices.

Island Hopping to Solund, Bulandet, and Værlandet is a trip to the westernmost islands of Norway. There are several thousand islands, so numerous from above, they look like giant lily pads. Some islands are connected by bridges with perfect little Monopoly-style houses gracing the shores. The locals are resilient seafaring people, many tracing their ancestry to the Viking Age.

Cut off from Norway’s mainland until 1960 when a road was built to the village of Hardbakke, many of these windswept and wild islands are only accessible by a postal boat. This tour departs from Hardbakke. Beginning in calm waters and passing by narrow creeks and many beautiful small islands, it brings you close to nature and wildlife. The boat determines its stops based on passengers and mail deliveries. The last stop is the idyllic fishing village of Gåsvær.

Afterward, the postal boat heads north to Bulandet and Værlandet in Askvoll municipality. Explore the islands on your own. They are connected by a series of bridges and 3.1 miles of roads — perfect for renting a bike. Take this tour as a day trip or over multiple days.

Go where few travelers have gone before and meet the people who live there. Warbelow’s Air Ventures flies its twin-engine, 10-seat Piper Navajo Chieftain to seven towns within 110 miles of its Fairbanks base, delivering mail and packages for the US Postal Service and UPS. Even Amazon packages make their way here.

This tour is a less expensive way to visit rural villages in Alaska, although there are no layovers. The plane only stops long enough to swap mail and have a chat with whoever turns up at the airstrip. But passengers get a bird’s eye view of Alaska’s interior; the treeless snow-covered mountains, roaming caribou, and heavily forested hillsides.

Locals get priority for empty seats, but passengers can pay to tag along for the experience when there’s space. Tours are approximately 1–3 hours with daily departures. Reservations can only be made the day before departures, but feel free to contact and discuss your plans. 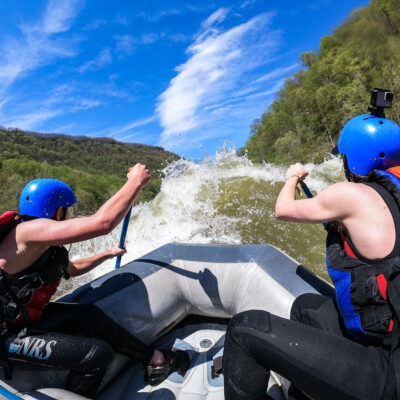