This year, because of health reasons, our annual visit to see my Calgary family in Canada didn’t happen in the summer. We arrived on September 20, technically the start of fall, when the weather was growing cooler. I was happy that I could again bask in great fall scenery, but my son-in-law said it would be coming later this year. To our pleasant surprise, a few days later, the colors started to come out. I woke up to yellows and oranges outside our window, dazzling as the sun’s rays struck the former greens.

And that began my hunt for fantastic fall scenes in and around the city. Here are six places I loved. The first three are parks near Sage Hill where my family lives, 25 minutes north of downtown. Then, we ventured farther, an hour away towards the Canadian Rockies, and found three more. And, of course, the grandmother in me found four more fall activities to enjoy in my precious time with the grandkids.

Lovely Fall Scenes Around The City

One day, while our family members were either at school or working, my husband and I ventured to nearby parks.

1. Right In The Heart Of Downtown Calgary

Prince’s Island Park sits in the middle of Bow River which cuts across the city. Entirely pedestrian and inaccessible to cars, you must walk to go anywhere in the park. It was wonderful to see the trees, shrubs, and grasses turn golden — especially around the beautiful Peace Bridge. Even more heartwarming was the sight of an elderly couple relaxing in their Adirondack chairs and enjoying the cool scene and crisp weather.

Pro Tip: In 2021, my husband and I found ourselves in Calgary to celebrate our 13th anniversary. We found River Café, housed inside the lone building in the middle of the island. If you get the chance, the dining is great here.

Scotsman’s Hill Park has the best view of Calgary’s skyline. The vista was even more striking when enhanced by fall colors. The historic hill lies between a steep escarpment on the Elbow River and a valley to the east, a rare hillside from Calgary’s frontier period when the grasses were a magnet to the bison. This, in turn, attracted the city’s settlers.

From this hill, you can see city landmarks like the Calgary Tower. Looming large at front and center is the Scotiabank Saddledome where the National Hockey League’s Calgary Flames play and where major evening concerts are held during the famous Calgary Stampede.

Pro Tip: Folks who do not want to pay can view the happenings of “The Greatest Outdoor Show on Earth” from this hill. It’s not by accident; even the Stampede grandstand is oriented towards the hill.

Nose Hill Natural Environment Park is just 20 minutes north of Scotsman’s Hill and is the park closest to my daughter’s home. It features 11 square kilometers (4.25 square miles) of nature created with a host of hiking trails, designated off-leash areas, one of the best remaining examples of a grassland ecosystem in Canada, and views of the Rockies, the Calgary skyline, and the eastern plains.

Pro Tip: The quaking or trembling aspens are the dominant plant species, giving the park its fall colors. Along with willows, they provide refuge for wildlife like deer, coyotes, porcupines, gophers, and squirrels.

Special Fall Scenes In Nearby Areas

But, what I wanted most to see were the larches, the only evergreens that turn yellow and gold during fall. They exist in the Pacific Northwest, but it’s in Alberta where they are abundant. However, they are tucked deep into the woods where you have to hike some distance to see their glory. I am not one who can do hikes anymore; neither can my husband.

My daughter found a link to a map where larches can be seen around the city; in other words, where they have been planted for decorative purposes. The nearby neighborhood of Edgemont provided me with my first glimpse, but I still wanted to see them in their natural state, where they color gray mountain slopes and emerald lake waters.

4. Where The Larches Reign

I researched and found Three Sisters Mountain Village, an easy-to-go-to place — like when I hunted for accessible places to see the rare-crested saguaros in Arizona. On the Saturday of our lone weekend, my son-in-law drove us to the golf resort and neighborhood around Three Sisters Mountain, about an hour from Calgary. The larches were all around and on hillsides near the highway. Still, if you have more time and are fit enough, consider hiking to see them and go to the best site: the Larch Valley near Moraine Lake in Banff.

Pro Tip: Don’t forget to enjoy the dramatic Three Sisters, the trio of peaks that are part of the Canadian Rockies, before reaching Canmore.

Since we were already near Canmore, the gateway to the relatively undiscovered Kananaskis area, we took the opportunity to revisit this pretty little town that has become an overflow area for tourism in the Canadian Rockies. It’s closer to Calgary by 30 minutes compared to Banff (and there are no admission fees).

Strolling and shopping along the pedestrian-only roads is punctuated by the dramatic mountain scenes Canmore and Banff are known for. This time, the scene was tinted with the colors of fall. And an eye-catching new artwork of a stag at the intersection of the middle two roads has added a vibrant hue of red.

Pro Tip: The Rocky Mountain Bagel Company, famous for its wide variety of bagels, was already closed when we were ready to stop and snack. That led us to a new outlet called Cacao 70, which served the best hot chocolate in town.

The West Bragg Creek Provincial Recreation Area is just 45 minutes from Calgary and on the way home. This gave us the chance to see fall colors around the water. There was even a lovely fall scene I was able to photograph from the SUV at the flood control area built around the tributaries.

Pro Tip: The Day-Use Area is the starting point for many popular hikes around the area. Wide lanes along the roads also attract a lot of cyclists.

Exciting Fall Activities with the Grandkids

Besides bringing beautiful colors and weather, however, fall also sets the stage for special activities, especially for the young. And as grandparents who have rare chances to dote on our grandkids — one 9 years old and the other 7 — we gladly took them to four traditional fall happenings.

They had no school on the first Friday of fall. That was also the opening day of Pumpkins after Dark, an award-winning fall event in Calgary. It has been held through October at Winsport, which now operates the Olympic Park where the Winter Olympic Games were held in 1988.

A special trail was bedecked with 6,000 lighted, carved pumpkins crafted together to form artworks like cars, flowers, insects, pets, and popular figures from Greek mythology, Lord of the Rings, Star Wars, the pandemic heroes, etc. Some had audio and some even had motion. And there were long rows of everyday pumpkins.

At TELUS Spark, the event called Beakerhead — “a smash-up of art, science, and engineering” — happens every fall because some exhibits need the dark, and in summer, the sun sets very late. Igniting the imagination of young and old alike, Beakerhead opened the same Friday night for free.

The much-touted giant Prosthetics was in front. It was too cold to see what was at the Centennial Gardens, however. Inside, while the kids enjoyed the interactive games with their parents, we met the Boston Dynamics robot, enjoyed the digital imagery section where screens mimicked our movements, and viewed the skyscraper-climbing robot at Imagine stage. Then, we all got back together to see a feature on the giant planetarium screen of Infinity Dome.

That Sunday, it was National Daughter’s Day, and mine took the kids and me to two activities. First was the Granary Road Apple Festival, about 30 minutes south of downtown. There were a lot of booths for apple wines, apple pies, and other apple things. But it was the bushel of apples in the “Guess the Number of Apples” activity that had the two kids busy counting until they magically came up with 278 and 297. Outside, they had fun at the game booths while I photographed some great fall scenery.

But it was Calgary Farmyard, 30 minutes from Granary Road, that they did not want to leave. It’s Calgary’s iconic farm theme park with both sunflower and giant corn mazes, mini-golf, animal farm, train rides, tractor tire mountain, gemstone mining, zip lines, and so much more. And the owners did a good job of creating Instagrammable spots: giant chair, Cinderella carriage, entrance to the corn maze, etc.

As we left Calgary for Denver, fall was already in its full glory. We discovered this time around that the city may be better known for summer or winter but it is definitely a great place for fall too. 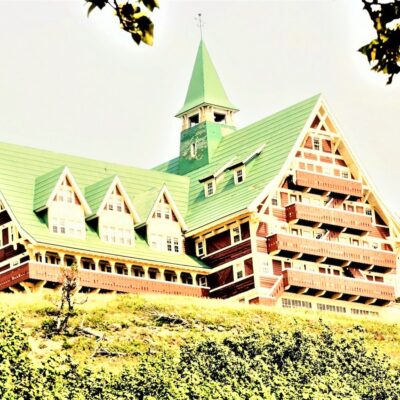 Calgary6 Unique Dining Experiences In And Around Calgary 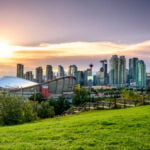 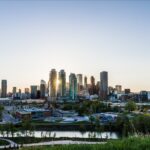