Why This Canadian City Is A Must-Visit For Book Lovers

If you love literature, chances are that the city of Winnipeg, Manitoba has been a pivotal part of your childhood — after all, the city is the namesake for the real-life “Winnie” from Winnie The Pooh. Yes, the bear who enamored a young Christopher Robin Milne was named after the Canadian city by World War I cavalry veterinarian Harry Colebourn. Colebourn adopted Winnie when she was just a cub and named her after his adopted home of Winnipeg.

Both children and adults will love exploring Winnipeg’s literary scene — and not just because of the Winnie The Pooh connection. This Canadian prairie city is full of incredible independent bookstores and cute cafes that are perfect for reading, something I discovered on a recent press trip. If you love to read as I do, here’s why you have to check out Winnipeg, Manitoba.

It Is Headquarters To McNally Robinson

Just hearing the name McNally Robinson is enough to make Canadian book lovers swoon. This family-operated chain of bookstores was founded in Winnipeg in 1981. New Yorkers might recognize its name because their city’s McNally Jackson chain is run by the founders’ daughter.

The Grant Park Mall location of McNally Robinson is often described as the largest independent bookstore in Canada (but this isn’t exactly an easy statistic to verify). What is a fact, however, is how wonderfully delightful the store is. Unlike the conventional grid-style layout of most bookstores, McNally Robinson is set up in curvy sections (think, say, the arrondissements of Paris versus the streets of Los Angeles). There are superb sections dedicated to local authors, Indigenous writers, and children’s literature. In fact, the entire second floor is dedicated to kid-lit. The store also offers an excellent selection of puzzles, games, and book-ish lifestyle products.

A second, smaller branch of McNally Robinson is located on the second floor of Winnipeg’s Forks Market. The Forks is a section of the city where Winnipeg’s two rivers, the Red River and the Assiniboine River, meet. In the market building, you’ll find little boutiques, lots of eateries, and the bookstore. Given that the Via Rail train station is just a short walk away, this is the perfect spot to stock up on reading materials and snacks for your journey.

The City Is Full Of Tiny Bookstores

While McNally Robinson is undoubtedly the big name in town, Winnipeg is just full of small bookstores to tempt every possible interest. For instance, A La Page is the city’s French bookstore. Located in the predominantly French-speaking neighborhood of Old St. Boniface, this is the spot to pick up local and international titles in French, as well as children’s literature and magazines.

Those who love to search through used books will enjoy spending time in either Osborne Street or the Exchange District (or both) On Osborne Street, you’ll find Nerman’s Books and Collectables (I grabbed a like-new copy of the Sugar Cookie Mystery here for just a few dollars — it’s never too early in the season for a Christmas cozy). Nearby, Burton Lysecki Books might just be the place to visit for a rare first edition. During my Winnipeg trip, they had a first Canadian edition of Anne of Green Gables that I found tremendously tempting.

In the Exchange District, the Red River Book Store is the perfect place to hunt down a new comic book or a used hardcover, along with movies, videos, records, and other odds and ends. Not far away is the bright and sunny Bison Books, which specializes in rare, old, and out-of-print books and prides itself on its meticulous curation and well-organized store.

My personal favorite Winnipeg bookstore is Whodunit. Since 1994, this mystery-focused shop has supplied customers with new and used titles (including lots of non-mystery material, including children’s literature and best sellers). The inside is cozy, the staff is extremely knowledgeable, and its Lilac Street location couldn’t be prettier. Loyal patrons enjoy a book club, a bi-monthly newsletter, and a rewards program.

Some additional bookstores that I haven’t had the chance to visit but will surely be on my list for next time include Prairie Sky General Store, Cover to Cover Bookshelf, Mighty Comics, GLOBOsapiens, and Book Fair.

There Are Relaxing Cafes That Readers Will Love

The only thing better than buying a book is diving into that first chapter, ideally with some fragrant coffee by your side. Winnipeg is filled with cafes that are just as lovely as its bookstores.

Little Sister Coffee Maker on Osborne Street is terrific for anyone visiting Nerman’s or Burton Lysecki. It’s a Wi-Fi-free environment, ideal for anyone who needs an excuse to get off their phone and crack open a book. For more substantial fare, you’ll find BMC Market between Osborne’s two bookstores. This beloved neighborhood spot features homemade tacos, quesadillas, and serves up the softest handcrafted tortillas I’ve ever had, as well as some yummy flan.

Other delicious options for coffee lovers include Canteen Coffee Shop, just a short walk from Whodunit and the Winnipeg Free Press News Cafe in the Exchange District. Yes, this cafe is indeed part of the city’s legendary independent newspaper and patrons often watch guests being interviewed live in the cafe itself.

Pro Tip: Visit Winnie! If you want to indulge your love of Winnie The Pooh while in Winnipeg, head to the city’s Assiniboine Park Zoo. There, you’ll see a statue of Winnie with Harry Colebourn. Winnie was originally going to be a resident of the Assiniboine Park Zoo following the war. However, in the end, he stayed at his wartime home, the London Zoo — and you can see a statue of him there as well!

For more information on visiting Winnipeg, check out these articles: 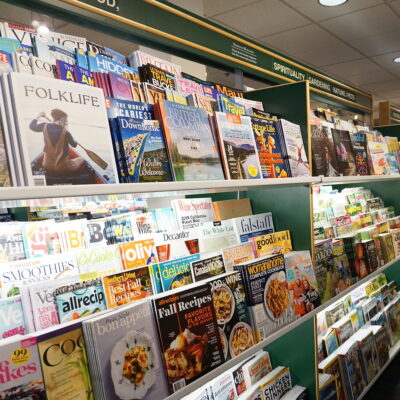 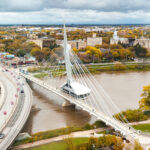 WinnipegHow To Eat And Drink Your Way Through Winnipeg 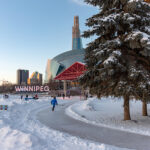 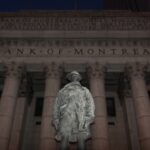