For 10 days every February, a joyous spirit takes over St. Boniface, the French quarter of Winnipeg, Manitoba, Canada, as the Festival du Voyageur gets underway. The largest winter festival in Western Canada celebrates Canada’s fur-trade history and the joviality of French-Canadian culture.

Festival, as it is commonly called, with the accent on the last syllable, offers something for all ages. There’s music, traditional cuisine, winter activities, snow sculptures, entertaining shows, and educational activities. Voyageur, Métis, and First Nations histories are brought back to life.

Events take place at several sites throughout St. Boniface. At Whittier Park, the festival’s central hub, the smell of wood fires and the sounds of fiddle music greet you as you enter the grounds.

Tents house entertainment and a craft market. Outdoor activities include snowshoeing, a children’s playground, and horse sleigh rides. Sit around a wood fire, toast marshmallows, listen to music, and enjoy the winter paradise.

Voyageurs were hardy French-Canadian fur traders who used canoes to carry furs and supplies to various outposts. Fort Gibraltar, located within Whittier Park, is the reconstruction of one of those outposts, a North West Company trading post originally built in 1809 to 1810. During Festival du Voyageur, costumed interpreters at Fort Gibraltar bring the spirit of the fur-trade era to life.

Buildings include a fur trading store, a voyageurs’ winter cabin, a blacksmith shop, and a storeroom. See the blacksmith at work and a craftsman creating the wood frame for a snowshoe. Watch interpreters cooking over an open fire and using an outdoor wood-burning oven.

Interpreters tell visitors about the details of life in the fur-trade era. During my visits, I learned about the difficulties of keeping food from burning or drying out in the outdoor wood-burning oven, the game voyageurs played, and the challenges of working with the birch bark used to make canoes. Birch bark dries out easily. For the bark to remain pliable, it needs to remain submerged in water.

Making birch bark canoes was just one of the things the voyageurs learned from Indigenous peoples. They also learned to decorate clothing with beads and to make pemmican, a highly nutritious food made with dried bison meat, bison fat, and often dried fruit. It kept for a long time and became the voyageurs’ main food source.

Note that Fort Gibraltar can also be visited during the summer months. Normally closed during the winter months, it opens up for the festival.

Festival du Voyageur holds an International Snow Sculpture Symposium. Teams from all over the world compete. Their innovative and detailed sculptures are on display at Whittier Park.

Though not part of the competition, you’re also likely to see a variety of snow sculptures pop up throughout the city of Winnipeg. Be sure to look for some along Provencher Boulevard, the main street running through St. Boniface.

Festival du Voyageur is a winter festival. Although it features many indoor activities, several attractions are outdoors. Dress accordingly. Wearing layers is a good idea if you are wandering between warm heated tents and the outdoors.

Although it isn’t required, you may wish to get more into the spirit of the festival by adding a voyageur flair to your dress. Interpreters throughout the park dress in full traditional garb, which includes moccasins and wool coats featuring fringes or tassels on the hood, shoulder seams, or cuffs.

Many visitors opt to incorporate only a few key elements of the outfit, such as a red toque (a close-fitting knitted hat known as a beanie in other parts of the world), a plaid flannel shirt, and/or a ceinture fléchée. The ceinture fléchée, which translates to “arrowed sash,” is a brightly colored wool sash made using a finger weaving technique and worn around the waist.

The voyageurs wore these sashes around their midsections to carry their belongings. The sashes could also be used as ropes to transport objects. Today, the ceinture fléchée is a symbol of French-Canadian and Métis culture and a must-wear item for many Festival du Voyageur attendees. You can find ceinture fléchées for sale in the craft marketplace.

Traditional French-Canadian and other food items are available at several locations within the park, including at several food trucks, and at other festival venues.

My top recommendations for a traditional menu are tourtière (a savory meat pie), pea soup, and maple syrup sugar pie. Other items you should try are baked beans, bison on bannock (a variety of flatbread made by Indigenous peoples), pulled pork, and pancakes. You’ll also find poutine, a dish made with French fries and cheese curds topped with gravy. These days, variations on traditional poutine, which originated in the province of Québec, incorporate other ingredients such as bacon, pulled pork, or perogies.

You can also get hot dogs, hamburgers, mini donuts, candy apples, and beavertails. Beavertails are fried dough pastries stretched to resemble a beavertail.

Join the line-up at the maple taffy shack for a sweet treat. Hot maple syrup is poured onto ice. You place a popsicle stick at one end of the syrup and roll it up as it cools to create your maple taffy.

A variety of beverages are available. You may want to sip a cup of hot chocolate to warm up. Caribou is the festival’s signature cocktail. French-Canadian folklore indicates the beverage got its name by originally mixing caribou blood with whiskey. The version of caribou you’ll get today is more like a mulled wine. It is made by heating red wine and whiskey or brandy and sweetening it with maple syrup. Citrus peel, cloves, or cinnamon can be added during the heating process. Caribou is served warm or cold.

Music is present wherever you go at the festival. Every specialty tent and venue features entertainment. The lively music will make you smile, tap your toes, or dance.

The fiddle, the most common instrument played in the days of voyageurs, figures prominently in much of the music you’ll hear, whether in traditional songs or music with a modern twist. Fiddling contests are a staple of the Festival du Voyageur.

There are also jigging contests. The Métis developed the jig in the mid-1800s. In the dance, the head is motionless and the arms are still at the side of the body while the feet move wildly and rapidly.

At concerts scheduled over the 10 days of the festivals, artists perform music of diverse styles. Of course, there is traditional French-Canadian folk music, but you’re also likely to hear blues, rock, country, and hip-hop.

One of the more well-known Festival du Voyageur competitions is not a game at all. It is a beard-growing contest. Clean-shaven contestants sign up in mid-December and then let their beards grow naturally until the start of the festival in mid-February. During that time, they collect pledges for charity. Categories include an open category for most creative, a voyageur category for longest and thickest, and a novelty category in which contestants can use hair-styling products to shape their beards.

While you will hear a fair bit of French spoken at Festival du Voyageur, you do not need to understand French to take in the fun. It is a bilingual festival. Just be prepared to frequently and enthusiastically yell out the festival cheer hé ho pronounced “hay hoe.” 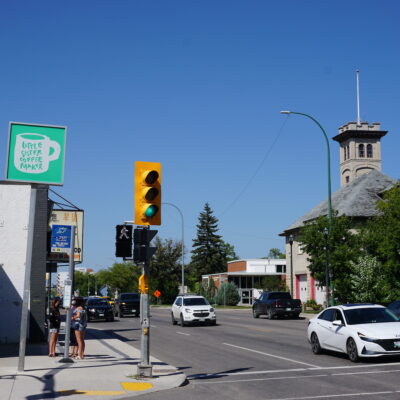 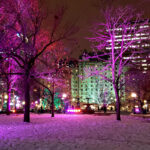 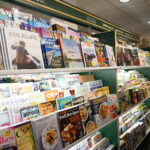