Melody Pittman
What Are Your 2023 Travel Plans?

Years ago, my family went on a Mediterranean cruise. We had private guides each day and excursions to show us the best sites and scenery. Driving the Amalfi Coast is something I’ll never forget and will always cherish. If you know, you know. It’s the most beautiful drive and an extreme nail-biter all at the same time. I thought no scenery could ever compare to that of this beloved Italian region.

Then, my oldest daughter and business partner, Taylor, and I cruised to the same areas with Costa Cruises. We hired a private guide and saw the same places as before. However, days later, we discovered two new towns at a different port we were in awe of. We instantly fell in love with both of them, and I think both make a great change of scenery from the Amalfi Coast. Here are seven reasons why we loved Finalborgo and Noli better.

I was hosted by Costa Cruises for a familiarization trip.

1. The Epic Drive To Finalborgo And Noli

When the Costa Toscana arrived at the port of Savona, we took an excursion with the cruise line to see two towns we were unfamiliar with. Finalborgo and Noli were on the itinerary. I quickly noticed that the traffic was almost non-existent for most of the drive. This is key for cruisers, as you don’t want to spend your port time sitting in traffic. There was no time to nap because our road had exciting scenery.

As we drove into the town of Finalborgo, the clusters of hearty oleanders and the mountainside dusted with quaint homes caught my eye. Then, a few minutes later, I couldn’t get enough of the coastline and beaches with blue water that looked too pretty to be real in Varigotti, the halfway point. Best of all, I didn’t have to hold on to the edge of my seat and shut my eyes when the oncoming traffic passed on the skinny roads as I did at the Amalfi Coast.

Finalborgo was our first stop, an old-walled medieval village in western Liguria minutes from the coast. We exited our bus, crossed a bridge, and had free time to wander the medieval center’s twisty, narrow cobblestone streets. At first glance, Finalborgo looked like many small towns in the U.S., maybe even West Virginia. But, once you walked toward the historic center off the main street, it transformed into a charming European feel.

Fun Fact: Noli was once one of the Italian Maritime Republics, like Genoa, Amalfi, and Pisa, during the 10th to 13th centuries. They played a role in the Crusades and had their own ships for trading.

Years-old Renaissance architecture with intricate design, several gates, painted frescoes, and even a clock offered a warm welcome to Finalborgo. Porta Reale with the coat of arms was the thing I loved most, but I didn’t mind for a minute eyeing the beautiful palaces. Town Hall, Cavassola Palace, and Court Palace are other points of interest.

Our tour group spent some time inside the Baroque-style St. Biagio’s Basilica, a gorgeous 17th-century cathedral with a slightly leaning bell tower, learning its history from our guide. The inside of the church was stunning, with an incredible pipe organ behind the altar, sparkling chandeliers, and gold crown moldings.

While I love history here, I preferred walking by the adorable cafés with sidewalk seating, seeing the flowering baskets hanging by doorways, and conversing with the locals. Inside these narrow streets, the only thing that mattered was what was going on right here in my sight; it was as if the outside world had disappeared. The vibe of the touristy, oversaturated Amalfi Coast vs. the authenticity and history of this city was incredibly noticeable. Make sure to wear comfortable walking shoes.

Pro Tip: I recommend sitting down and splurging on a decadent waffle sundae from Bar Centrale Grosso.

Like the Amalfi Coast, Noli has gorgeous, accessible beaches with a gravel and sand mixture. They are perfect areas for families and youngsters. Lifeguards are on duty, and there are playgrounds nearby. The two things I loved about the beach are that the beachside cafes sat right against it, steps from the water’s edge, which made it a spectacular place to enjoy people watching and the magical beach scene.

Fun Fact: Noli’s beaches have the Bandiera Blu status — certifying that the water quality and environmental standards have been met. Blue flags mean they are clean and safe to swim in.

Also, the beaches weren’t full of people — areas of colorful umbrellas dotted the landscape, but you could make out plenty of space for sunbathing, reading, taking a nap, or soaking up the sun if you wanted to do just that. There are rentable loungers, restrooms with showers, bars, and restaurants providing food and refreshments just steps away.

Popular outdoor sporting activities in Noli include scuba diving, sailing, windsurfing, and paragliding. Quite a few people were floating on rafts and swimming, but most were sitting or lying on the beach under umbrellas. Horseback riding is another opportunity.

Small fishing boats still head out to sea in Noli. A stall along the promenade is where they sell their fresh catch; skipjack and mackerel in the fall, squid, and mullet in winter, and octopus and tuna in summer.

4. Noli Is The Best Of Both Worlds

Eighteen minutes away in Noli, you have the best of both worlds. There are primo beaches and a seaside, palm tree-lined promenade on one side of the street, and wandering streets via the historic village and medieval walls on the other. Noli lies 31 miles southwest of Genoa and is part of the Italian Riviera. It has a storybook feel, similar to the historic towns of Eastern Europe, more so than the Italian cities I’ve been to.

During the Middle Ages, Noli was one of the maritime republics. It is one of the most beautiful Italian villages. Above the town sits a majestic castle, looking down on the mesmerizing historic center.

I feel that Noli has way more things to do than the Amalfi Coast, which to me is more about epic views and dramatic landscapes than the culture of an Italian destination. A beloved attraction in Noli is the Romanesque San Paragorio Cathedral, with gorgeous frescoes and paintings dating back to the 11th century.

While I love the historical offerings, I enjoyed strolling the winding streets of Noli with my daughter, taking pictures, breaking for cheese focaccia (that Taylor still hasn’t stopped talking about), and admiring the painted doors, colorful planters, and hidden gems amongst the landscape. We were excited at the pampered pooches walking around with their owners. Italy is full of dog lovers, similar to the U.S.

We also took time to shop at the ritzy boutiques that offered silk scarves, leather belts and purses, and gorgeous flowered dresses.

If there is one thing you must eat in Noli, it is an Italian pastry. Just one look in the local bakeries, and I was drooling. The cannoli is primo, and the coffee is robust and flavorful. Other places you might want to see during your time in Noli include Casa Pagliano, Casa Repetto, and the Cathedral of Saint Peter. I appreciated the plaques on the buildings describing the address in English and French.

Pro Tip: Restrooms are scarce; use them at restaurants or coffee shops you visit.

6. Affordability And Ease Of Getting There

Our cruise excursion to Finalborgo and Noli was 45 € per person and well worth it. We rode on a comfortable, air-conditioned bus, were dropped off near the main point of interest in the town, and had little or no traffic for the entire trip. Using a taxi driver for a personal tour of the exact nature still runs less than 100 € per person, a far cry from the 300 € per person multiple cab drivers in Naples quoted me to reach the Amalfi Coast.

Noli is also connected to the bus system, making it easy and inexpensive to get around.

Reiterating, cruise port time is limited, so you will want to get the most bang for your buck, which means seeing something, not sitting in traffic, and having to fight and wait for the perfect time and spot for your Amalfi Coast photographs.

Even on the small and winding sidewalks, we could still get through the areas with weekend foot traffic and not wait in lines to pay for souvenirs and snacks. 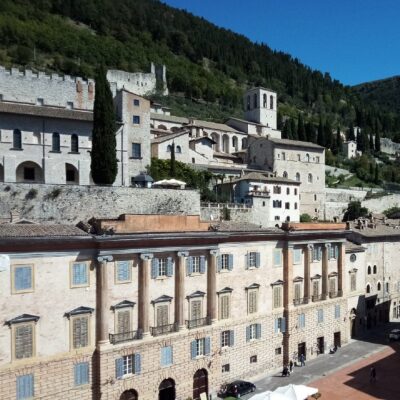