8 Best Places To Shop In Athens, According To A Local

During my tenure living in Athens, one thing I’ve learned is that, whilst this city’s ancient sites are magnificent, Athens offers so much more. Many visitors come to Athens to visit the Acropolis or simply head straight to the islands. Incomparable to Los Angeles or Milan in terms of shopping, don’t underestimate the shopping experiences to be had on a visit to Athens. Make some time to fit in a spot of retail therapy into your vacation.

Here, I share with you some of the best places to shop in Athens and what you can expect to find in each place.

Let’s start with one of the most famous places in Athens — Monastiraki Square and its adjoining flea market. The square itself is rich in culture and history with Neoclassical buildings and the mosque of Tzistarakis Aga, a symbol of the city’s Ottoman rule.

If you’re looking for tourist memorabilia — anything from the ubiquitous leather sandals, postcards, fridge magnets, or olives to take home — this is the place to come.

But it’s the flea market held on Sundays that makes Monastiraki well worth a visit.

Vendors gather early in Avissinias Square, just a few feet from the main square, and sell any paraphernalia that will leave you wondering if it’s worth buying — from broken doll heads to drachma coins. It’s a veritable treasure chest.

Pro Tip: Go early on Sunday if you can. Even if you don’t buy anything, it’s interesting to get a taste of Greek life as locals sit around playing tavli (Greek backgammon). Plus, Avissinias Square, less touristy than Monastiraki, has some lovely coffee shops to rest up.

The Central Market Where Locals Come For Fish And Meat

Built in 1886, this mix of traditional shops, food stalls, and coffee specialists all infuse their aromas under one covered roof to give visitors a unique local experience.

Divided into sections, expect to see meat, fresh seasonal fruit and vegetables, dairy products with plenty of cheese and eggs, and, of course, the Greek specialty of fish. Varvakios Agora hosts nearly 100 fish stalls making it one of the largest fish markets in Europe.

Locals, greengrocers, and restaurateurs come here to purchase produce for their various eateries and shops. Even if it’s unlikely you’ll buy anything yourself, come and immerse yourself in daily life. For those with strong stomachs, try out the magiritsa soup served in the cafes within. A Greek delicacy usually served at Easter, it can be bought from the Central Market, but be warned — it consists of the insides of a lamb!

Pro Tips: If you’re quite sensitive, maybe skip the meat section with its large slabs of meat hanging from hooks. It’s like being in a huge butcher shop. Head to the colorful fruit and vegetable section instead. And go early. Since it’s enclosed, the spring and summer months can get hot.

The Spice And Deli Hub Of The City

The foodie in you will love Evripidou Street. Running just beyond the Central Market, it’s awash with colors and aromas from family-run businesses that have been around since the 1940s selling herbs, spices, sacks of dried tea, and nuts. It’s reputed to have over 2,500 shops, making it a favorite for many famous Greek chefs.

It’s here you’ll also find some popular delicatessens/charcuteries. These places are Instagram-worthy with their various meats and counters offering a variety of colorful cold cuts. Popular haunts include Miran, established in 1922, offering a little known patio through the back where you can order your staple at the main counter then sit and enjoy. Opposite is the more popular Ta Karamanlidika tou Fani; more of a meze restaurant offering a variety of meats, cheeses, beers, and wines.

Pro Tip: Walk farther down Evripidou and you’ll see the neighborhood becomes a cultural melting pot, interspersing Asian and Middle Eastern shops, not to mention a smattering of small barbers.

4. Aiolou Street In The Historic Center

The Monastiraki flea market, Varvakios Agora, and Evripidou Street are known for their markets, delis, and spice stalls respectively. Nearby Aiolou Street is the place to head if you’re on the lookout for hiking trousers, shorts, in fact, any manner of everyday clothing, and even furniture — all at very friendly prices. It’s a veritable treasure trove. Many visitors to Athens have been pointed towards the vendors in their little shops here to purchase last-minute necessities. Maybe you’re in need of a bigger suitcase if you’ve been on a mass spending spree and need to take back more than what you came with, or you simply forgot to pack a useful item.

Pro Tip: Aiolou Street runs from Monastiraki Square to the Omonia district of the city. Other than offering cheap items, there’s not much to see here except the occasional commissioned and beautiful street murals on some buildings as the street reaches Varvakios Agora. It’s worth a wander down this street just to see these for yourself.

One Of Athens’s Longest And Busiest Shopping Streets

You’ll find anything and everything on Ermou Street — the nearly mile-long pedestrianized thoroughfare running from Syntagma/Parliament Square down to Monastiraki. Here, you’ll find high-end street clothing and athletic brands, cosmetics such as Mac and Sephora, plus independent shops interspersed in between. Among department stores such as the Greek Hondos Center and Marks and Spencer, you’re bound to find anything you want for your vacation and to take home. Ermou Street remains one of Athens’s most popular shopping strips for both locals and tourists alike.

Its name, of course, has a Greek mythological link. Ermou is derived from Hermes, the Greek God and protector of traders. Take a stroll down, window shop, and stop at a food stall for a koulouri snack — a Greek sesame bread ring.

Pro Tip: Make time to stop and visit the Church of Panagia Kapnikarea, one of the oldest Byzantine temples in the city. Located roughly halfway down Ermou Street, King Otto originally planned to demolish it. The temple was saved, however, by an intervention from the King of Bavaria. It now belongs to the University of Athens and makes for an interesting cultural stop during your retail jaunt.

If your budget is no object and luxury goods are your preference, it’s the main square of Kolonaki and surrounding streets you’ll want to head to. One of the richest neighborhoods in Athens because of its proximity to Syntagma/Parliament Square and nearby Mount Lycabettus, residents of Kolonaki range from politicians to “old” money.

It’s the area of the biggest fashion houses such as Cartier, Gucci, Prada, and ever-emerging Greek designers. This is also where you’ll find the many cafes and coffee houses that the various sections of Greek society frequent — political heavyweights, literati, and those brokering a business deal.

Mixed in amongst these are several art galleries and museums such as the Museum of Greek Culture — part of the Benaki collection — and the newly-opened National Gallery on the main artery road of Vasileos Konstantinou. A great neighborhood to shop for high-end clothes, relax among the well-heeled and combine your time with a museum visit.

Pro Tip: Kolonaki also offers several “preloved” — second hand to you and me — luxury clothing at more affordable prices. Look out for shops such as Second Hand Lux; whereas Brand Stories caters to handbag aficionados. Kolonaki is the place to come for luxury cast-offs.

Take a walk east of Kolonaki and you’ll reach the renowned Exarchia neighborhood. Referred to as the “dodgier side of town,” Exarchia has perhaps been unfairly labeled. It’s a great student district, but students in Greece have been affiliated with demonstrations, especially during the financial crisis era. Don’t be put off by the booted riot police that seem to frequent every corner of this neighborhood, discouraging large gatherings. Exarchia has many cafes, bars, and shops to choose from and soak up the atmosphere.

It’s here you’ll find most of the city’s vintage shops. Whereas Kolonaki has luxury preloved, its students’ creative energy and edginess are reflected in the vintage stores in Exarchia. Kimonos, ‘80s anoraks, and outdoor clothing abound in Yesterday’s Bread. Hotsy Totsy offers jeans, trousers, dresses, and Hawaiian shirts. Whereas — although not second hand — Mimis is the place to come for handmade Greek sunglasses at excellent prices.

Pro Tip: I suggest combining a shopping outing with both Kolonaki and Exarchia as each slowly bleeds into the other.

Everything Under One Air-Conditioned Roof

Great for those hot summer or chilly winter days, you may be surprised to learn that this ancient city has a handful of shopping malls with a variety of shops, restaurants, and cafes. Some even have large movie complexes, always showing films in their native language with Greek subtitles.

Mostly located just outside of the city center, The Mall Athens was the first to open in the northern suburb of Maroussi in 2005. It remains the largest.

Maroussi seems to be a favorite for shopping malls. In 2008, Golden Hall opened its doors in the same suburb. Here, you’ll find more high-end and mainstream retailers such as American Eagle, DKNY, and Gap, plus the usual plethora of restaurants and fast food/coffee outlets.

Head down to the coast of the southern suburb of Agios Dimitrios and you’ll find Athens Metro Mall. Conveniently, it’s right by the metro station of the same name. Over 90 stores among four levels, the usual cine-complex, food outlets, and a supermarket await.

Enjoy your vacation to Athens, interspersed with a spot of shopping.

For more incredible experiences in Greece, check out these stories: 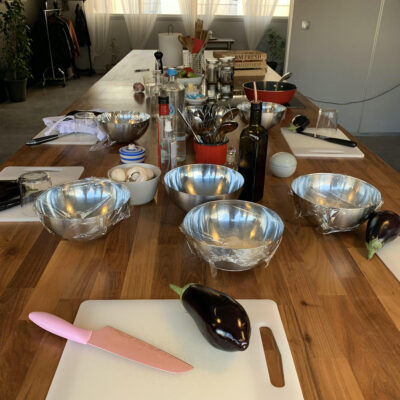 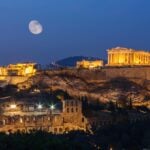 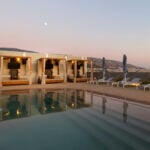 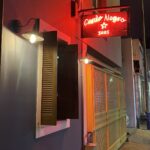