9 Amazing Experiences In The Rodeo Capital Of Texas 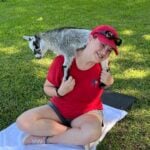 Kim Croisant
What Are Your 2023 Travel Plans?

Mesquite, Texas, a 15-minute drive east of downtown Dallas, offers visitors a place to get out and explore. In 1993, the city of Mesquite was declared the “Official Rodeo Capital of Texas” by the Texas Legislature. Mesquite holds more rodeos than any other city in Texas, so it’s no wonder they landed the title.

So look no further than the city where rodeo and barbecue go hand in hand. Whether it’s tender melt-off-the-bone ribs or slow-cooked brisket, Mesquite has plenty of authentic Texas barbecue to satisfy your palate (or your barbecue craving)!

I was hosted in Mesquite, Texas, for a weekend with my two dogs. If you’re bringing your pups along, Mesquite has you covered. These attractions below will wow you when visiting the city and are in no particular order; however, I did start with what Mesquite is known for — rodeo and barbecue!

One of the largest tourist attractions in Mesquite happens every Saturday night in June, July, and August when the traditional rodeo season begins. Thousands of spectators worldwide gather at the arena to watch their favorite rodeo events like bronc riding, bull riding, steer wrestling, and the like. Rodeoing is a big deal here in Texas! And, yes, you’ll find barbeque here!

The World’s Famous Mesquite Rodeo is fun for the whole family and is one of the country’s few continuously running rodeos. When the rodeo is not going on, the multi-use Mesquite Arena becomes a soccer field and is a concert venue hosting award-winning musicians.

If you’re there for the rodeo, expect many vendors inside selling cowboy hats, cowboy boots, leather purses, belts, T-shirts, and many more rodeo attire and souvenirs. I couldn’t help myself, I bought myself a cowboy hat with a hat band (that was extra). Now, if I can just find another place to wear it!

For a perfect summer rodeo experience in Mesquite, Texas (June, July, & August), book a hotel room at the Hampton Inn & Suites Mesquite Convention Center, steps away from the Mesquite Arena. Get your rodeo tickets online and walk on over to the arena. Locate the barbeque vendor and load yourself up with some Texas barbecue, have a seat and enjoy the show. See one of the pretty girls if you want a hat like mine — they’ll hook you up. The Hampton Inn & Suites is pet-friendly and kid-friendly, with a nice outdoor swimming pool. And, if you’re lucky, a cool event will be happening in the Convention Center that suits your fancy.

No matter how you spell it, Mesquite is known to have some of the best barbecue in Texas. It’s so good, they made up a Mesquite Barbecue Trail to follow. There are a few barbecue chains on the list, but may I suggest starting with locally-owned barbecue joints such as Mesquite BBQ? They are family-owned and have been open since 1959, making them the oldest restaurant in Mesquite. They have an excellent reputation as the best barbecue in Mesquite. I indulged in the largest baked potato loaded with brisket when I was there. Head to Mesquite’s Barbecue Trail to see the restaurants on the trail.

This historical landmark is more than just a park. The Opal Lawrence Historical Park was the homestead of the Lawrence family that once lived and farmed here. After the final sister passed away in 1995, Opal Lawrence’s estate turned the home over to the city, which purchased 11 surrounding acres to create the park.

The buildings in this park are over a century old. Most buildings have been completely restored, including the 1840s log cabin, the 1886 barn, and the 1909 clapboard church. Now on the National Register of Historic Places, the property is open for tours of the buildings, and the big red barn is available for events. They also hold several city events here for the public.

Downtown Mesquite, aka Front Street Station, is the historical heart of the city, with authentic eats, shopping, and a farmers market (in season) with live music from local bands. Downtowns are where the history is and are usually my favorite spots to wander.

It’s where the locals hang out and where you’ll find locally-owned restaurants and stores. That’s my kind of place. When you go, you’ll see a brand new development that the city has been working on for years, and there is more to come.

Enjoy a casual dining experience at locally-owned restaurants like pet-friendly Bear Cave Coffee, the Mesquite BBQ that I mentioned above, Dos Panchos, and the newest restaurant, Alejandro’s at Front Street, which serves traditional Mexican recipes and more.

On the walls of downtown are eight murals (and counting) that depict the city’s history and make wonderful Instagrammable photo spots. My favorite is the one I’m standing by, but there are others, like the Mesquite Arena and a red, white, and blue rose that’s just beautiful. Soon, all blank walls in the area will have some sort of art on them.

This is one of the best farmer’s markets I’ve been to. Every Saturday, April through November, from 9 a.m. to 1 p.m., shop for artisan goods, locally grown produce, baked goods, bath and body products, and more at the Farmers Market in Front Street Station.

And while you’re there, enjoy live music from local singers and grab a meal from one of the food vendors who offer everything from barbecue to classic fair food. Save room for ice cream or snow cones. There are plenty of places to sit and relax, and if you want to get up close to the music, get there early for a seat across from the outdoor stage. When I was there, Mesquite BBQ’s owner sang with her band.

The Mesquite Arts Center is home to the Mesquite Symphony Orchestra, live theatre, special events, and more. Also, art enthusiasts will enjoy the rotating exhibits in the gallery. Be sure to check for upcoming events while you’re in town.

Shop 3 million square feet of over 200 stores, including name brands such as Dillard’s, Macy’s, and Dick’s Sporting Goods, to name a few, at Town East Mall. You know what they say about Texas. Texas is big, and Town East Mall is bigger! Before long, a new addition to the mall will make this North Texas icon even bigger. Look for new shops, family entertainment, and my favorite — rooftop dining!

Do you like to shop for other people’s treasures? I sure do. If you like antiques and fine things, there’s more shopping at The Antique Gallery. With over 170 vendors within 36,000 square feet of retail space, this is a fabulous place to find that one-of-a-kind gem. As you can probably tell from its size, this antique mall is larger than your typical antique store. I’m almost sure you’ll find something for yourself here.

With over 70 parks in Mesquite, it’s hard to name them all. But here are a few that were memorable on my visit, plus where to see the bluebonnets in spring and where to take your dogs. View this list of parks in Mesquite.

For a less than a mile leisure stroll around the lake on a cement trail with a beautiful foundation in the middle and perhaps some fishing, visit Palos Verdes Lake Park. Pets are welcome to come along.

If bringing your pet along on a trip and wanting them to run around freely, head to Mesquite’s leash-free park. The park provides two fenced-in areas — one for small dogs 30 lbs and under and the other for larger dogs. My dogs and I spent the most time here so they could roam around without a leash.

Capture views of butterflies fluttering around from March through October while meandering down the butterfly trail on the cement path while enjoying the beautiful outdoors.

If you happen to be in Mesquite during spring (late March), you can wander through wild Texas bluebonnets while hiking or biking on the trails. Bring your camera for those family photo shots.

This pet-friendly park has lake views, a half-mile trail for runs, walks, and biking, and is an excellent place for large groups with kids, complete with nice picnic areas and many picnic tables, some of which are covered. Bring your fishing pole too.

49 years running, Devil’s Bowl Speedway is still bringing in crowds from all over the world. If car racing is your thing, plan a trip to Mesquite from March to mid-October, and watch fast cars race on the dirt track to the finish line. Plan for a Saturday at 8:30 pm. Get even closer with a pit pass!

For more on Texas, explore these articles: 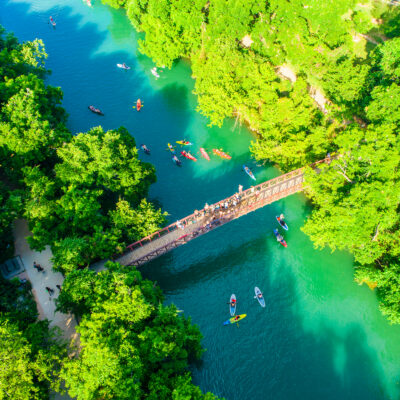