My 5 Favorite Places To Eat Pizza In Naples, Italy

Pizza has a long history in Naples, Italy. There’s a well-known legend about the Queen of Italy during a visit in 1889. Queen Margherita stopped at a pizzeria, and the pizzaiolo (pizza maker) wanted to impress. He crafted a pizza with the colors of the new Italian flag: red tomato sauce, white mozzarella, and green basil leaves topped with olive oil. It was a huge hit, and the pizza margherita was born.

After World War II, pizza was a luxury many could not afford. During the war in Naples, pizza ovens were destroyed or torn down for scrap, and wood was hard to come by. But olive oil was plentiful. Another pizza tradition, pizza frita, became popular. Pizza fritta is pizza dough fried in hot oil and stuffed or topped with ingredients.

You will see pizza all over Italy today, but Neapolitan pizza is in a league of its own. It’s one of the most famous street foods in the country. It’s estimated that Italians consume pizza at least once a week. I can see why; it’s a delicious and inexpensive meal.

In a city as large as Naples, it’s not hard to find pizzerias. I spoke with a local chef who recommended five restaurants as some of the best in the city — and, of course, I tried them. They are in no specific order, but visitors should not miss them in Naples, Italy.

Pizza Napoletana has held a special designation since 2010. It has an STG qualification (specialità tradizionale garantita, or “traditional specialty guaranteed”), meaning the dough’s ingredients, shape, and preparation are controlled and regulated by law. The Associazione Verace Pizza Napoletana ensures high standards, guaranteeing quality for designation as a Neapolitan pizza.

Neapolitan pizza starts with local San Marzano tomatoes, fresh mozzarella (either fior di latte or mozzarella di bufala), basil, and extra virgin olive oil. It’s baked in a wood-burning Neopolitan pizza oven for 60–90 seconds. The crust should be chewy, puffy, and have a nice char. The fresh ingredients tend to be watery, so eat in the restaurant for the best experience. The pizza is served on a plate and is never pre-cut; use your knife and fork to cut pieces or cut into slices, and fold in half to enjoy.

Pizza fritta is pizza dough that’s fried, then stuffed or topped. The size ranges from small or large puffy discs to an enormous crescent that overlaps a plate. The half-mood shape gets loaded with cheeses and optional meat.

This Antica Pizza storefront usually has lines that stretch out of the small shop in the Piazza Trieste e Trento. It’s been operating since 1935 and remains famous for its traditional pizza fritta. When you enter the store, you’ll observe the pizzaiolo making orders from scratch, frying them behind a glass window. Patrons read the short menu (five varieties), order, and pay inside. Then you wait outside, seated at a table, or you can linger just beside the shop to take your hot, fried pizza on the go.

Honestly, we felt pure joy when we received that piping hot crescent of goodness. It came in a sheet of paper so one can handle the pizza fritta, which is blazing when it comes out of the oil (but is not greasy). We split one (the perfect amount) as we planned to eat pizza all day.

Our choice was the Traditional, stuffed with tomato, ricotta cheese, smoked mozzarella, black pepper, and pork crackling. There’s also one with beef, salami, ham, or a vegetarian (just the cheeses). We paid around four dollars for our pizza fritta, which was fabulous. We also got a Peroni, an Italian lager, to sip with our food.

Starita is a pizzeria, but it started as a winery in 1901 by founder Alfonso Starita. In the 1940s under Giuseppe Starita, the establishment was a trattoria/pizzeria/friggitoria. A friggitoria is a restaurant that prepares fried foods. In the ‘50s, it became famous as the setting (even the pizzaiolos were actors) for an Italian film starring Sophia Loren, L’oro di Napoli. In the movie, Loren plays a beautiful, adulterous pizza chef.

The movie made the restaurant a landmark, but the third-generation proprietor, Antonio Starita, shifted the focus to crafting the best Neapolitan pizzas. That tradition continues today with his son, Giuseppe, the fourth generation of the Starita family. Traditional Neapolitan pizza and specialty pizzas with various toppings are on the menu, and gluten-free crust is now available.

This pizzeria is in the Materdei quarter and is very popular. You may have a wait for a table, but you can order the pizza to go; ask them to cut it for you. Starita is known for incredible pizza as well as starters, like the stuffed zucchini flowers. The flowers are traditionally stuffed with ricotta, dipped in batter, and fried.

Since taking over, Giuseppe continued the tradition of fried pizza. He created a house specialty where the pizza is fried and then baked with toppings. We had to try it, so we ordered a margherita with buffalo mozzarella. It’s like a smaller, round pizza, and the crust was crunchy and puffy simultaneously. The sauce and mozzarella were so fresh, and the unique twist of frying and baking was scrumptious.

Pizzeria Da Michele on Via Cesare Sersale is the most authentic Neapolitan pizza in the city. The Via Cesare Sersale location is the second since it was founded in 1870. It’s referred to as the “Temple of Pizza,” and it’s the setting of the pizza scene with Julia Roberts in the movie Eat Pray Love. Her photo and photos of other famous people grace the walls inside.

When you go, be prepared to wait, but it’s worth it. You walk up to the host, give him your name, and he hands you a ticket and an estimated wait time. If you can’t wait for a table, order your pizza to go, and then eat it standing at one of the tables outside. You will sample the margherita and marinara pizzas expertly prepared here. There are no other pizza varieties served.

Da Michele has a Michelin star because this establishment loves tradition. This five-generation family business takes its craft seriously. The ingredients come from the best purveyors in Campania, and the techniques were learned from the founder, Michele Condurro, a master pizza maker who passed those skills on to his children and their children. The restaurant only makes two types of Neapolitan pizza to make sure that the quality of the ingredients and the techniques are up to the standards of the STG. We arrived right around lunchtime on a weekday, and the line was long. We ordered the pies to go and ate standing at the tables outside. I looked inside the small dining room and spied the original oven and the expert pizza maker. The pies coming out were gorgeous. When we got ours, we dove in immediately not to let the pies sit too long. It lived up to the hype, and we ate every slice. It’s pizza heaven at this temple.

Pizzeria Oliva da Carla e Salvatore is a local’s favorite across the street from the Basilica of St. Mary of Health and close to the Catacombs of San Gaudioso. The family-run business makes a variety of different pizzas, including vegetarian options. Salvatore has his two teenage sons working with him and is teaching them how to make a great pie.

Pizzeria Oliva is a casual restaurant with plenty of seating. When we arrived in the late afternoon, there were no lines, and Salvatore was making pizza behind the counter. We decided to compare the marinara version to Da Michele’s and took it to go. Marinara pie has a few ingredients: fresh San Marzano tomatoes crushed into a passata or sauce, olive oil, and basil. The result was delicious and simple, and the crust was thin and crisp at Oliva. There’s no place to hide with this pie, so everything must be perfect, and it was.

Isabella De Cham graduated from culinary training in 1993. After working with some of the best pizzaiolos, she opened her place in 2018. She is anything but traditional and has turned the traditional Neapolitan pizza scene modern at her shop. The menu showcases an interpretation of classic fried and baked pizzas and includes vegan and vegetarian options. She has a second location which is all gluten-free.

Isabella primarily employs women in her modern pizzeria. She is known for her stuffed and topped pizza fritta but also makes traditional pizzas. We had to try her Stracciata: pizza fritta with ham, buffalo stracciatella, and parmesan cheese on a fried disc. And we ordered a Nerano pizza, which consists of zucchini cream on the crust and fried zucchini and provolone cheese on top. Both were exceptional, and we enjoyed each elevated bite of this extraordinary chef’s version of modern Neapolitan street food.

Pro Tips: We visited Naples twice, once on a weekday and once on a Sunday. Naples is a busy city during the week, so Sunday is a perfect day to enjoy strolling the streets and dining at leisure.

Here’s more for your Italian vacation: 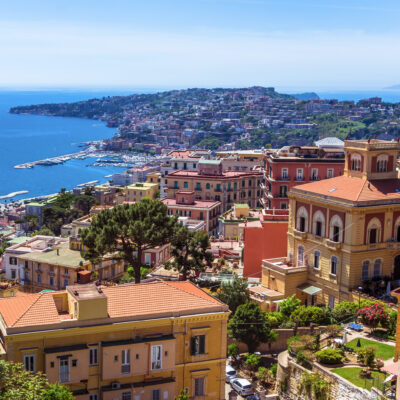