The Delicious Experience In Door County, Wisconsin Not To Miss

Tell me, if you witnessed the scene above, would you:

If you are in Door County, Wisconsin, the answer to the question is option 3.

Door County is a 70-mile-long peninsula in northeastern Wisconsin between the bay of Green Bay and Lake Michigan. About 4 hours north of Chicago, it encompasses the area from Sturgeon Bay on the south, where the peninsula is about 18 miles wide, and narrows to the northernmost tip between Gills Rock and Northport, where it’s less than 2 miles wide.

This special area is famous for beautiful scenery, charming towns. Because of the proximity to the bay and the lake, you’re never more than a 15-minute drive to water, making for miles and miles of coastline, and glorious sunrises and sunsets. It’s been called “The Cape Cod of the Midwest.” And it’s brimming with old-world Scandinavian charm (goats on the roof, anyone?), décor, and traditions, including a unique culinary experience: the fish boil.

What Is A Fish Boil?

Lots of restaurants present boiled fish as a menu item, but not like this. In Door County, locally caught Lake Michigan whitefish are the star of a fish boil. It all happens in the great outdoors and starts when an extra-large black kettle of salted water is placed over an open fire. When the water boils, the “boilmaster” drops a heapin’ helpin’ of small potatoes and onions in the water and, at just the right time, drops the fish into that same bubbling, boiling water, too.

It all boils together until, about 7 minutes later, oil from the whitefish rises to the top of the kettle for the pinnacle of the event: the boilmaster adds kerosene to the flames, creating the dramatic “boil over.” The fish oil spills over the side and hits the flames, it all roars in high drama, and the boilmaster knows the fish and fixings are done to perfection!

The fish boil was birthed by need, in the power of community. In the late 1800s, Swedish immigrants wanted an economical way to feed their expanding families and/or large groups of workers. Whitefish was plentiful in the local waters and were a logical choice to feed a crowd. The fish boil was born more of practicality than pageantry. It wasn’t until the early 1960s that it became a popular tourist attraction and began to grow into the fascination it is today.

Although you’ll find some variation, a traditional fish boil menu includes steak(s) of fresh whitefish (skin on, bone-in), baby red potatoes, small white onions, and fresh breads, which might include a hearty choice like rye and/or sweet breads like pumpkin or lemon. For dessert, you’ll love fresh-baked Door County cherry pie (á la mode, if you please!) in honor of the cherries that are another part of the peninsula’s bounty.

Pro Tips: For non-fish fans, restaurants also offer chicken, spareribs, or another alternative. And kids or grandkids, who may enjoy the spectacle of the fish boil but not the result, can default to hot dogs or chicken strips.

Fish boils are a classic Door County experience. Destination Door County names eight establishments that offer them, including the Log Den and Viking Grill & Lounge. These restaurants extend from Sturgeon Bay in the south to Rowleys Bay in the northeastern part of the peninsula. I can speak for the fantastic fish boil at the Old Post Office restaurant.

At my friend Jane’s recommendation, we made reservations at Old Post Office in Ephraim. They offer (indoor and) outdoor seating overlooking the bay, and the weather was beautiful that mid-September evening. And how often can you eat in a renovated post office turned restaurant?

We had reservations for 5:30, but we were told to get there at least a half-hour early to hear the boilmaster talk about the history, his work, and the preparations for our feast. We sat outside on wooden benches positioned in a large square at a safe distance from the kettle in the middle, and the fire was already raging. When we arrived, potatoes and onions were already in and things were cooking.

The boilmaster is part chef, part showman, and I’m not sure which part is greater. They definitely have to know what they are doing. The timing is critical to the success of the meal, and all the elements must be just right. You won’t see a lot of pomp and decorum in the preparations and explanations; you will hear a lot of passion and heart for the craft.

As the kettle boiled, the boilmaster joked that early immigrants would never have guessed that one day, crowds would gather to hear and see the food prep that was a normal practice of life. He talked about the contracts the Old Post Office has with local fishermen for the whitefish and how this produces a steady demand for the plentiful fish.

When it was time to add the whitefish to the potatoes and onions, the boilmaster announced that he’d bring the basket of whitefish steaks around for us to see.

In with the fish, and 7 minutes later, the boilmaster performed the kerosene toss that makes a fish boil a roaring spectacle!

And then… it’s time to eat. We had made reservations at an outside table. Those who called earlier than we did (first come, first served) got those coveted tables closer to the water, which is the bay of Green Bay.

The fish is flakey, tender, and has a subtle, mild flavor, boosted a bit by melted butter (you control the amount) and your choice of shakers of several seasonings at the table, including salt and pepper. The breads are fresh and baked in-shop or locally. Cap the experience with a locally brewed beer or glass of Door County wine. A fish boil is a unique meal, made more so by the whole preparation and cooking experience.

Pro Tip: One advantage of a fish boil at the Old Post Office is that your server will offer to remove the bones from the fish, if you want them to. It’s not hard to de-bone the tender fish, but it’s still a great service.

The best time of year for a fish boil is any time they are serving one! Some restaurants continue the practice year-round, but everything slows down in Door County in winter, so be sure to call for reservations and get the current fish boil times. Calling is important — most of these are small “mom and pop” establishments, so their websites may not have the most current information.

Some restaurants, like the Old Post Office, offer indoor and outdoor seating and you can specify which you’d prefer, depending on availability. They make every effort to accommodate groups.

In general, I prefer everything about Door County in the shoulder season — April/May or September. Summer is very busy, the small towns are booming, reservations can be hard to find, and the roads are crowded.

A fish boil is a Door County classic. How can something pulled from a fiery caldron taste so good? Maybe it’s the fresh air. Maybe it’s the quaint surroundings. Maybe it’s the company you keep. Whatever the reason, it’s a lot of fun to explore a classic Wisconsin fish boil, truly a delicious Door County experience that you won’t want to miss.

Check sunset times and plan your fish boil dinner so you have time to catch a dramatic sunset at the Sven’s Bluff overlook in Peninsula State Park. Vehicle admission stickers are required for motor vehicles, but this view alone is easily worth the price of admission. 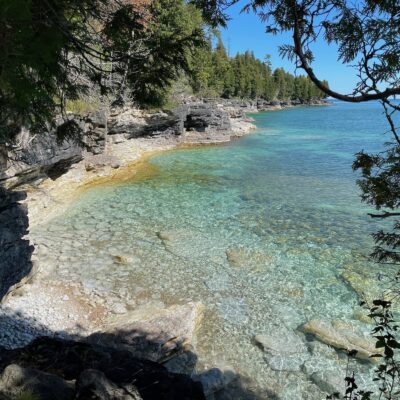 Door County20 Amazing Things To Do In Door County, Wisconsin 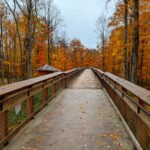 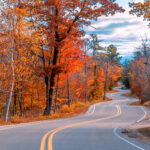 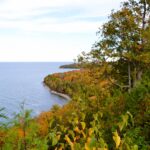