Northeast Florida has five fantastic history-changing forts that are fun to visit. Each began life at a different time and has an interesting story to tell. All have costumed re-enactors at certain times, and they are all are near beaches and many other attractions.

Matanzas is Spanish for “slaughter” or “massacre.” Fort Matanzas earned its name in 1565 before they built a fort. France and Spain were competing for control of North America. France already had a struggling colony near present-day Jacksonville (that’s the next fort).

Pedro Menendez de Aviles arrived in Florida to found a Spanish colony in 1565. Jean Ribault, the French commander, attempted to engage Menendez, but a hurricane wrecked his plans and two ships. While Ribault was slogging his way back from the shipwreck site, Menendez destroyed the French colony. He then captured and executed almost all of Ribault’s men at the inlet about 14 miles south of Saint Augustine. In 1569, the Spanish built first a wooden watchtower at Saint Augustine, then later Fort Matanzas as protection against British ships also attempting to gain control of the continent.

Now, it’s a national park. When I visit, I enjoy the ferry ride over from the mainland to tiny Rattlesnake Island where the fort is. And no, I’ve never seen a rattlesnake on the island, but be sure to bring mosquito repellant. The ferry runs between the fort and the Anastasia Island portion of the park from 9 to 5 daily except Christmas. The fort is built of native coquina. During its occupation, it housed 7 to 10 enlisted men and one junior officer.

The fort originally had five cannons. The two remaining cannons are originals. The Spanish abandoned the fort after the United States acquired Florida. Today, you walk down a permanent stairway into the fort. Originally, the soldiers used a wooden ladder. There is usually a re-enactor onsite and frequent musket firing demonstrations.

The park houses a visitor center with a museum and a boardwalk nature trail that runs through a scrub area that looks much as it did in 1565. I always spot wildlife like birds, squirrels, and sometimes turtles. All that remains today of the slaughter is a small wooden sign commemorating the spot where it occurred. Only a small portion of the First Coast’s tourists find their way here. Those who do get a chance to see a spot that marked the turning point in the beginnings of European culture in the New World.

Pro Tip: Fort Matanzas National Monument is open to the public from 9 a.m. to 5:30 p.m. every day of the year except Thanksgiving Day and Christmas Day. Plan to arrive early and register for the ferry as space is limited. It also has a picnic area and beach access.

Fort Caroline was the site of the French colony Menendez destroyed. You can visit a reconstructed fort on the northeast side of Jacksonville. I like that the site tells not only the story of the French Huguenot settlers but shows the part the native Timucuans played in helping the French settlers.

The visitor center has a museum. The artifact that enthralled me was a 1594 bronze Spanish cannon recovered from a shipwreck near Vero Beach. The museum has artifacts from Florida’s earlier years.

When I walked back to the reconstructed Fort Caroline, I was amazed at how authentic they kept it. You enter through gates with a French coat of arms. Construction of the original Fort Caroline began in June 1564 by a second group of French Huguenots. This replica is about one-third the size of the original fort. There’s a recreation of the village the French settlers built here including a replica of an oven. They built community ovens outside the fort to prevent fires from igniting gunpowder. There’s a replica of a Timucuan home and shelter with a Timucuan dugout.

The Timucuans knew how to use nature’s resources and taught the settlers. They hollowed out logs to make dugouts to access the waterways. Fiber and baskets were created from saw palmetto and other trees and plants in the area. Shells made tools.

On the banks overlooking the river, you find Ribault Monument commemorating the stone column Ribault erected claiming Florida for France when he landed in 1562. Normally there is a living history event in early May to mark the landing of Jean Ribault, but it has been suspended temporarily due to the COVID pandemic. There are also smaller-scale ranger demonstrations and costumed programs.

Pro Tip: The entire Timucuan Ecological and Historic Preserve is free. The visitor center is open from 9 a.m. to 4:30 p.m. Wednesday through Sunday. Dogs on leash are welcome in outdoor areas.

Saint Augustine suffered frequent attacks from pirates in its early days. In 1672, the Spanish government realized wooden forts were no deterrent to the pirates. They issued the money to build Castillo de San Marcos on Matanzas Bay. It wasn’t until 1695 that the first phase was completed. The fort is constructed of coquina, a type of shell-stone quarried from Anastasia Island. Coquina absorbs cannonballs instead of crumbling as stone would have done. That is probably the reason that the fort had never been conquered. It changed hands many times, but always by treaty. Over the years, it passed from Spanish control to the British and between the United States and the Confederacy during the Civil War.

When I toured the fort and walked across the drawbridge, it was like stepping back to the 17th century. The drawbridge would be closed during pirate attacks and residents sheltered inside. The passages are filled- with furnishing that would have been in place in its earliest days. There are officers’ quarters, enlisted men’s barracks, a chapel, munitions and supplies, and more. Cannons sit atop its walls pointing out over the bay, just daring those pirates to try something. Reenactors are usually present drilling or performing tasks that would have been normal in the 1700s. The fort is open from 9 a.m. to 5 p.m.

Pro Tip: The Pirate and Treasure Museum across the street tells a lot more about pirate attacks in those early years.

In the 1600s, an underground railroad of sorts ran south, and people escaping slavery in Georgia and the Carolinas came to the welcoming Spanish Colony of San Agustín.

In 1738, the first free community of formerly enslaved people was established and named Gracia Real de Santa Teresa de Mose or Fort Mose. This was St. Augustine’s northernmost defense line against British attacks. If a runaway slave agreed to convert to Catholicism and all the able-bodied male family members would join the militia, they were welcome. Today, it’s Fort Mose State Park.

I love that the park and adjourning museum have interpretive signage that explains the history of the settlement. The actual wooden fort no longer exists, but the history and reenactments here make it very real. There are several reenactments annually. In June, there’s a reenactment of the Battle of Bloody Mose. The battle occurred during a little-known War of Jenkins’ Ear between Spain and Britain. In the fall, Harvest Time celebrates the first harvest at Fort Mose, where I sampled various foods probably similar to those cooked here that first year. One reenactor told me about the abundance of pork due to the escaped and abandoned pigs that became feral and multiplied. The feral pigs common in many parts of Florida are descendants of these early Spanish pigs. Throughout the year there are reenactors who will explain Fort Mose’s history. It’s also a perfect place for hiking, kayaking, and picnicking. The park is free. The visitor center is open from 9 a.m. to 5 p.m., Thursday through Monday. The grounds are open daily from 9 a.m. until 5 p.m., 365 days a year.

Fort Clinch is a 19th-century brick fortress on Amelia Island founded in 1847 after the Second Seminole War. No battles were fought at Fort Clinch, but it had a significant influence on history. Confederate troops occupied the incomplete fort until 1862. Confederate forces withdrew because they were needed elsewhere, and Union forces regained control of the area without any shots fired. Union forces restarted construction of the fort and continued through the end of the war. The fort was an important base of operations for Union forces throughout the Reconstruction Era. A row of cannons points across St. Mary’s River into Georgia. The Willow Pond Nature Trail takes you past a collection of coastal depression ponds formed when the Civilian Conservation Corps (CCC) took out rocks and other materials to construct park roads in the 1930s. The fort has living history interpreters daily that provide a valuable glimpse into our nation’s Civil War past. When we visited on a frigid day, Corporal J.R. Ludy sat mending a uniform in front of a blazing fireplace. 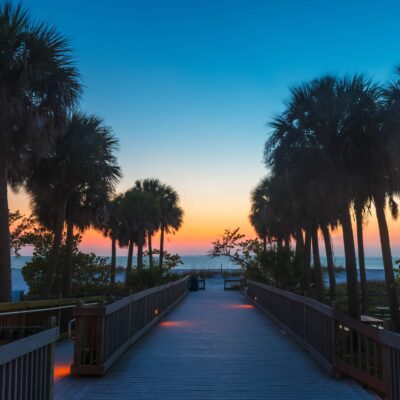 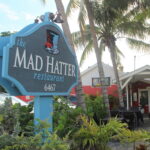 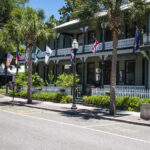