Utah’s first national park, Zion National Park, was established in 1919 and ranks as the state’s most-visited park today. The park’s main road, Zion Canyon Scenic Drive, opened in 1932. Summers have traditionally been the busiest time of year at Zion, but Spring and Fall are very popular times to visit as people try to beat the heat. Summers in Zion can routinely reach 100 degrees Fahrenheit. If you really want to avoid crowds, winter can be a perfect time to go as well. No matter when you go, you’ll see spectacular natural beauty and you’ll have lots of opportunities to spend time in the great outdoors and experience nature at its finest.

A shuttle system runs throughout Zion National Park. There are nine stops, beginning at the visitor center, and the last stop is at the Temple of Sinawava. The free shuttle makes stops at all the popular trails in between as well. Except during certain times in December, the shuttle is the only way to explore the Zion Canyon Scenic Drive. Private vehicles aren’t allowed when the shuttle is operating, which is during most of the year except December. The shuttle is wheelchair accessible and has room for backpacks, bicycles, and climbing equipment so there should be plenty of room for all your gear. Masks are required on the shuttle.

We headed to Zion from Bryce Canyon and entered the park from the east. As we traveled the Zion Mount Carmel Highway and approached the park, we were blown away by the truly breathtaking scenery. We were also really surprised by the Zion Mount Carmel Tunnel. I read that it was a mile long and a very narrow tunnel, but actually driving through the tunnel was something else! It was originally built as a way to allow direct access to Bryce Canyon and the Grand Canyon from Zion National Park. The trail was built beginning in the 1920s when cars were a lot smaller and there weren’t so many big campers. Because the tunnel is so narrow, there are vehicle size restrictions in place today. If your vehicle is taller or wider than the limitations, you’ll be required to use the traffic control through the tunnel. With traffic control, the park rangers will stop oncoming traffic through the tunnel so you may come down the center of the road in the tunnel. There is a charge for using traffic control, but it’s less than $20 dollars per vehicle and allows you two trips through the tunnel within 7 days. Also, the tunnel closes between 4:30–7 p.m. depending on the season. If you arrive after hours, you’ll need to return at 8 a.m. the following morning in order to pass through the tunnel, or use an alternate route around the park.

3. The Town Of Springdale, Utah

Unless you’re staying within the park at the Zion National Park Lodge, there is no more convenient place to stay near Zion than Springdale. The town of Springdale is located at the southern border of Zion and has all the amenities you’ll need for your trip. We stayed in one of the many hotels that line Zion Park Blvd and our stay could not have been better. We were literally in the shadows of Zion and it was amazing to sit at the fire pit and gaze at the beautiful red rocks. In addition to the many hotels, there are plenty of restaurants in town so you’re covered when hunger strikes. There’s also a good selection of specialty shops and outfitters in case you forgot to bring some of your hiking gear. The local grocery store, Sol Foods, is a perfect place to stock up on necessities. Check out the deli in the back for homemade soups and salads. The toasted bagel I had with my curry chicken salad was outstanding. I know a bagel is a bagel, but this one really rocked!

4. Use The Springdale Shuttle System

Springdale also runs a shuttle system that operates from spring until fall. The Springdale Shuttle system takes visitors from the town of Springdale to Zion National Park. It’s really awesome because riding the shuttle will allow you to leave your car in the parking lot of your hotel and not have to fight traffic into Zion. The parking at Zion fills up quickly so you have to get there really early to get a parking spot. Save yourself a headache and help avoid traffic congestion in the park, just take the shuttle. The shuttle route has nine stops in Springdale and runs from early morning until late at night.

After a day at the park, you’ll be hungry. For outstanding cuisine, check out Oscar’s Cafe. This local gem is fantastic. We asked the front desk gal for a recommendation for a good, local place for dinner. She said Oscar’s is the place to go and highly recommended their burgers. In my mind, one of the best things about traveling is experiencing great local restaurants and bars. I always eat local because it’s usually just so good and I always like to support local, small businesses. I didn’t get a burger, but Oscar’s served us one of the best meals of our entire trip. It’s a casual eatery with a heated, open air patio and small indoor space. The place was filled with hikers and park visitors, but even with the laid back vibe, the kitchen produced top notch, elevated food. Menu selections range from burgers to salads to Mexican fare. I went with the salmon with a maple glaze that was served on a bed of rice, along with a poblano pepper stuffed with cheddar mashed potatoes. But wait, there’s more! My entree also came with a side of well seasoned black beans and a dish of corn, cilantro, onions, and red peppers. The guacamole that came with our chips was really fresh and tasted homemade, as did the chips. We were there in the off-season, so we were able to walk right in without a reservation. If you go during the busy season, I’d call ahead and see if you can reserve a table. I think you’ll like it!

6. Cool Trails For All Experience Levels

While I’m not an experienced hiker, I do like to hit the trails. There’s nothing better than fresh air and exercise in jaw dropping scenery. And that’s just what you can experience at Zion — regardless of your hiking experience. We had a blast hiking several trails at Zion. My favorites were the Middle and Upper Emerald Pool Trails. Both are between 1.5 and 3 miles roundtrip and took us less than 2 hours. Both are rated as “moderate” trails by the National Park Service which means they’re moderately difficult. I’d agree and the difficulty for me was mainly the elevation changes. There are rocky steps and wet terrain from the waterfalls as well so all the trails can be tricky at times. We had fun hiking and the scenery was incredible. You just can’t see the same views without hiking into the rocks. If you’d like a paved trail, the Pa-rus Trail is a popular paved trail that is handicap accessible and even allows dogs!

I learned that true hikers have Zion National Park on their shortlist for two specific reasons: Angel’s Landing and The Narrows. If you’re not familiar, these two hikes are the biggest bucket list hikes for legit hikers in the U.S. Angel’s Landing is considered to be one of the most dangerous hikes in the country. The Narrows is another iconic and dangerous hike that all real hikers have on their radar. The thing with The Narrows isn’t the height but the flash floods that can happen in the blink of an eye. If a challenging hike through parts of the Virgin River sounds like fun to you, then you may love hiking The Narrows.

You may not know that another one of Utah’s spectacular national parks, Bryce Canyon National Park, is only about 90 minutes away from Zion. You can access Bryce Canyon via the east entrance of Zion National Park on US-89. You’ll drive through the mile-long Zion Mount Carmel Tunnel and reach Bryce Canyon within about an hour and 30 minutes if you make no stops. Since the parks are only about 80 miles apart, many people visit both parks on one trip. This is what we did and I recommend it. The drive between the two parks is something not to be missed. And you really shouldn’t miss either park if you’re in the area because they’re both so unbelievably beautiful, yet very different. That said, everyone we talked to said definitely make time for both in your itinerary, but do not drive between the two after dark. We were told by many that it’s really best to not drive after dark in the area, period. The roads are very dark and it’s very common for wildlife to meander on the roads at night. So best to stay in after dark and hit the road bright and early in the morning.

For more to do in Zion’s home state of Utah this time of year, consider: 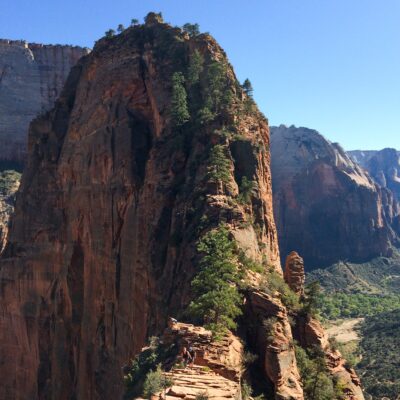 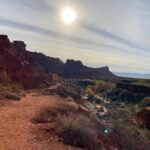 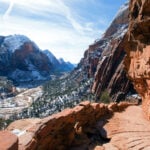 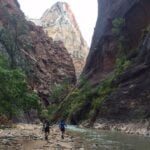