With four of the highest peaks in the state of Texas contained within its boundaries, the Guadalupe Mountains National Park has plenty of bragging rights in the hiking arena. Not only is it the home of the “Top of Texas,” but the West Texas park also boasts sand dunes, flowing springs, and cool canyons.

Located about 2 hours east of the West Texas city of El Paso, the Guadalupe Mountains rise dramatically from the floor of the Chihuahuan Desert, ultimately reaching an elevation of 8,751 feet on Guadalupe Peak — the highest point in Texas.

As I approached the Guadalupe Mountains National Park from the west on my recent Texas road trip, I was struck by the abrupt transformation in everything from the terrain to the climate. On my late June visit, the temperatures dropped quickly from the 90-degree Fahrenheit range in El Paso to a cool, misty mountain day in the 60s.

Along the way, the landscape transitioned from broad desert valleys studded with spiny yuccas and mesquites to soaring mountain peaks covered in everything from ocotillo and prickly pear cactus to juniper and pine trees.

An easy amble through history awaits at the Pinery Trail, a 0.9-mile handicap-accessible trail that passes through cactus-studded desert terrain on its way to the ruins of the Old Butterfield Stagecoach route’s Pinery Station.

Built in 1858 as a part of the Butterfield Overland mail route that stretched from St. Louis to San Francisco, the station was abandoned just a year later when the line was shifted south to the Davis Mountain route.

The easy walk along a paved path takes about 20 to 30 minutes to complete.

Pro Tip: Although opportunities for hiking with dogs are limited in Guadalupe Mountains National Park, the Pinery Trail from the visitor center to the Butterfield State Station is one of the spots where leashed pets are allowed.

Along with the scenic terrain, the trail also showcases the interesting history of the people who settled in the area more than a century ago. An interpretive sign along the route poses the question: “Could you survive here?” It goes on to explain that in 1906, Texas pioneer John T. Smith established the Spring Hill Ranch, which later became known as the Frijole Ranch.

Smith chose the site because of the availability of water in the region’s springs. Manzanita Spring was periodically dredged to provide a reliable water supply for the Smiths’ gardens and orchards. Today, the spring makes for a lush, tranquil respite in the middle of the harsh desert landscape.

The route to the spring is paved and mostly level. The hike is rated as easy, and it takes about 30 minutes to complete.

Continuing on from the half-mile of paved trail to Manzanita Spring, a more rugged dirt-surface trail makes its way for 2.3 miles (round trip) along the Smith Springs Trail Loop.

The route climbs about 400 feet in elevation to the sheltered oasis of Smith Spring, located in a patch of oak trees at the foot of Frijole Ridge. The hidden gem in the desert offers a shady spot to cool down after what can be a hot, sunny hike. The trail follows a fairly gentle grade, but the route is rocky.

The hike is rated as easy-to-moderate and takes about 1.5 hours to complete.

Along the way, the trail passes an intermittent seep of water that is hidden amidst a stand of junipers before wandering along an arroyo wash. The top of the trail features views of the mouth of the ruggedly beautiful McKittrick Canyon.

Although the Nature Loop is short at less than a mile, it features a rocky surface and includes a gradual elevation gain of more than 200 feet, which combine for a moderate rating. The trail takes about 1 hour to complete.

Rising 100 feet from the desert floor, the Salt Basin Dunes shine against the looming peaks of the Guadalupe Mountains. The dunes are formed from the barren salt flats to the west. The park’s website explains that when the rain runs off the highly soluble limestone rock in the nearby mountains, salts are leached, and the runoff pools in the desert basins. As it evaporates, large grains of mineral salts are left behind.

The wind carries the salt grains toward the mountains, where they form into gypsum dunes at the base of the western Guadalupes. In an ever-changing configuration, the dunes are sculpted by the winds into hills and ripples.

The Salt Basin Dunes Trail is about three to four miles (round trip), and the hike takes 1 to 3 hours to complete. The website notes that some of the dunes are 60 feet high and require scrambling through shifting sand.

Right in the heart of the national park is a massive canyon that features dramatic rock formations, cool creeks, and rugged ridgelines. McKittrick Canyon is bordered by towering rock walls that protect a lush riparian landscape at the base of the canyon.

The Pratt Cabin Trail provides the shortest distance into the heart of the canyon along a 4.8-mile round-trip hike. The trail crosses a meandering creek twice before arriving at the historic Pratt Cabin, a 1930s-era limestone-and-pine cabin that was the summer home of Wallace Pratt, a petroleum geologist who later donated the cabin and surrounding land to the National Park Service.

The hike to the Pratt Cabin is rated as moderate and takes about 2 to 4 hours to complete.

Starting at the Pine Springs Trailhead, the Devil’s Hall Trail follows a rocky wash before arriving at a large natural rock staircase that leads to a “hallway” of steep canyon walls. Along the way, the trail also offers great views of distinctive rock formations, trees, and mountaintops.

Adding to the difficulty of the 3.8 miles (round trip) and 548 feet in elevation gain of the Devil’s Hall Trail is the extremely rocky terrain through the wash area. The National Park Service recently rated the hike as strenuous because of increasingly frequent heavy rains in the late summers, which cause the trail to be covered in loose rocks, boulders, and other debris.

The park’s website cautions: “Visitors should exercise caution and use proper footwear and trekking poles. Do not attempt to climb in the wash or canyon walls in wet or rainy conditions.”

The Devil’s Hall trail typically takes 3 to 5 hours to complete.

For hikers looking to bag the highest point in Texas, the Guadalupe Peak Trail is the spot to do it. Known as the “Top of Texas,” the summit offers panoramic views of the salt flats stretching in the distance, as well as seemingly endless views of the Chihuahuan Desert, with the El Capitan cliffs serving as a backdrop.

At about 8.4 miles round trip and with nearly 3,000 feet of elevation gain, Guadalupe Peak is rated as strenuous, and it typically takes 6 to 8 hours to complete.

Beginning at a trailhead at the Pine Springs Campground, the trail switchbacks through the desert before reaching a steep cliff ridge, where it begins gaining steadily. At about 3 miles in, hikers will come to a wide level area, where the peak comes into view. The final ascent is about 1.5 miles along the edge of a canyon.

At the peak, an obelisk commemorates the pioneers of the cross-country mail service along the Butterfield Overland stagecoach, which ran just south of the mountains.

The National Park Service website notes that on a clear day, the views from the “Top of Texas” (8,751 feet, or 2,667 meters) are outstanding. A map of the hike is available on this PDF. 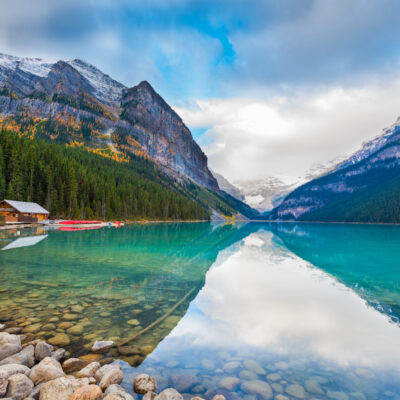 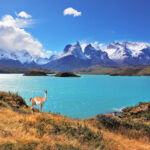 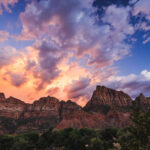 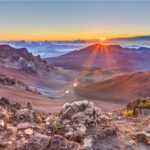