The bounty that comes from the emerald waters of the Gulf of Mexico is a seafood lover’s dream come true. Redfish, shrimp, oysters, scallops, crab, the list seems endless and no one celebrates the flavors of the gulf like the cities, towns, and villages that dot the coastline.

Each year, thousands of people flock to the coast to enjoy some fun in the sun and join in the celebration at one of the many festivals held throughout the year. Award-winning local, regional, and national chefs set up shop along the beaches and boardwalks to cook up their specialties for all to savor.

Put on your crab bib, grab a cup of tartar or cocktail sauce and make plans to attend one of these fabulous seafood festivals along the coast from Port St. Joe, Florida, to New Iberia, Louisiana, and points in between.

On one of Florida’s last remaining stretches of gulf beach that is void of high rise condos and strip malls and in the shadow of the Cape San Blas Lighthouse in Port St. Joe, the Florida Scallop, Music and Arts Festival celebrates the delectable mollusk.

The annual fest is held Labor Day weekend and is packed with wall-to-wall music provided by local and regional artists, rows of arts and crafts tents, and of course, food trucks and booths where you can sample the tasty shellfish in a variety of stews, seared in lemon butter, grilled, or just about any way you can imagine.

The best part of this festival is that it gives back to the fishery with a portion of the proceeds going toward continued restoration of local scallop beds.

Single or two-day tickets can be purchased in advance online.

Pro Tip: Just because we all think Labor Day weekend is the end of summer, Mother Nature says differently. The weather is still hot and humid along the Gulf Coast. Be sure to wear your sunscreen and stay hydrated while enjoying the fun of the festival.

It’s not called the Emerald Coast for no reason. The brilliant green-tinted water of the Gulf of Mexico is rimmed with an incredibly white fine sand beach that has made this section of the Florida coast and the town of Destin one of the top 10 beaches in America. It is here you will find the Destin Harbor Boardwalk that brings a good old-fashioned beach boardwalk into the 21st century by going beyond having just shops and restaurants. The boardwalk is also the home for adventure with parasailing, dolphin boat tours, jet-skiing, snorkeling, and more.

As the summertime crowds wane and fall arrives, the boardwalk plays host to the Destin Seafood Festival. Held the first weekend of October, the festival celebrates the incredible bounty the gulf has to offer with a multitude of vendors and restaurants lining the boardwalk for two miles serving up delectable fried and grilled seafood that was caught fresh by the Destin fishing fleet.

Admission to the festival with its arts and crafts and music is free. Food vendors charge a fee so bring cash to partake in the scrumptious seafood dishes. A portion of the proceeds goes to help the Destin Charter Boat Association and the fishermen who bring us the feast.

Pro Tip: Expect crowds and be patient. The festival has grown exponentially, surpassing more than 60,000 attendees a year.

Heading over to the Florida Panhandle, the city of Pensacola invites your tastebuds to sample the best of gulf seafood at the annual Pensacola Seafood Festival.

For three days over the last weekend of September, the festival is a seafood lover’s dream. The best local and regional chefs cook up just about any seafood dish you can imagine using literally fresh-off-the-boat crab, shrimp, calamari, conch, and more at the Gulf to Table area.

One of the most popular dishes served during the fest is the traditional crawfish boil. Mounds of crawfish, crab, and sausage are cooked up in giant pots along with onions, corn on the cob, baskets full of vegetables, and plenty of seasonings. When ready, the aromatic dish is dumped onto a newspaper-lined table and it’s time to dig in.

And as always, there is lots of music and dancing in the streets, with an eclectic array of styles performed by national and local musicians. Admission is free.

Pro Tip: The festival takes place in historic Seville Square. Parking can be a challenge so plan on arriving early.

What’s your seafood pleasure? Shrimp pisolites, crab cakes, shrimp Po’ Boys? And that’s only for starters. The menu runs the gambit for all tastes at the Orange Beach Seafood Festival.

Held annually in the middle of February at the wharf entertainment and hotel complex, the festival is a true party with two stages running nonstop entertainment, a car show, and of course, seafood.

And while you’re walking the streets of the wharf, take time to stop in and shop at one of its nearly 30 shops and boutiques.

Admission is free but a small donation is requested per car that helps Orange Beach schools and the Makos Academics Arts and Athletics Club.

Pro Tip: Being held in February means that you will avoid the famous Gulf Coast heat and humidity, but it does get chilly (sometimes downright cold) so check the weather and dress accordingly.

It’s all about big, delicious gulf shrimp at the annual National Shrimp Festival in Gulf Shores served up fried, grilled, baked, blackened, you name it. For four days in the second week of October, more than 10,000 pounds of fresh shrimp is cooked up daily by the best restaurants and chefs along the Alabama Gulf Coast.

Over the weekend that begins on Thursday, the beach is electrified with over 100 hours of nonstop, foot-stomping blues, rock, zydeco, and country music, a 5K and 10K race, and a sand-sculpting contest.

When you need to take a break from the festival, cross Beach Boulevard and explore Gulf Shores. There is so much to do that you may find yourself staying longer than the weekend. Admission to the National Shrimp Festival is free.

Pro Tip: Pets are not allowed on the festival grounds. Parking near the beach is very limited. You would have to arrive pretty early to get a spot. It’s best to park elsewhere and use one of the city’s shuttle buses to take you to the festival site.

Enough about shrimp. Let’s give some love to the other delicious gulf crustacean, crab! With a gorgeous view of the Gulf of Mexico as the backdrop, Our Lady of the Gulf Catholic Church in Bay St. Louis does just that each year over the 4th of July weekend during its annual Gulf Crab Festival.

The festival runs Thursday through Saturday with music, more than 100 arts and crafts booths, and of course, incredible crab dishes. And as the festival winds down, you’ll be treated to another show: a beautiful golden sunset over Bay St. Louis and the Gulf. It doesn’t get much better.

Pro Tip: Being held in the middle of summer, there’s a good chance that you will encounter the well-known afternoon Gulf Coast showers and downpours. They are brief but be prepared by bringing along an umbrella or rain jacket.

Fifty miles southwest of New Orleans is the tiny town of Lockport, Louisiana. The town is affectionately called the “small town with a big Cajun heart,” and that spirit is put on full display during the Lockport Bayouside Festival.

Held mid-September on Canal Street, the centerpiece of the festival is the Jambalaya Cook-Off where local chefs whip up gallons of the spicy dish for the judges, and you. Your taste buds will tingle with the “holy trinity” of vegetables (onions, green peppers, and celery), spicy Andouille sausage, Cajun seasonings, and shrimp, prawns, and crawfish.

Expect plenty of foot-stomping Cajun and country music, arts and crafts, a car show, and lots of fun.

In 1704, a group of women known as the “Pelican” or “Cassette Girls” arrived in the new French settlements of Mobile and New Orleans and began cooking up a unique fish stew. They tossed a Caribbean vegetable into the pot called okra, added a bunch of spices, and one of the most iconic Southern seafood dishes was born: gumbo!

For over 30-years, the town of New Iberia, Louisiana, has celebrated gumbo as it hosts the World Championship Gumbo CookOff. Over 100 professional and amateur teams lovingly brew up pots of gumbo for visitors and judges alike during the second weekend of October, bringing with them their own unique culinary twists.

Admission is free. Tickets are required for food and drinks on Saturday and only cost $1. For the cook-off on Sunday, you will need five tickets to sample seafood gumbo, four tickets for all others.

Pro Tip: Pets are not allowed on the festival grounds.

The Gulf Coast has many activities and attractions to keep visitors thoroughly entertained: 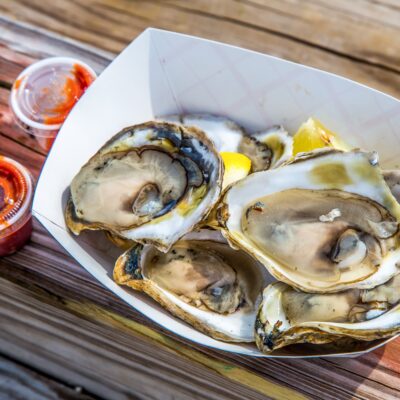