One of the best ways to take a break after a long day is with liqueurs: sweetened distilled spirits enhanced with fruit, spices, flowers, nuts, or other flavors. The origin of liqueurs comes from the herbal medicines used by medieval monks around Europe. In early America, liqueurs became quite popular and though originally used as after-dinner digestifs, liqueurs captured the imaginations of innovative bartenders in the 1800s and soon found their way into cocktails of every sort.

Some classic liqueur flavors have endured while new ones arrive from all corners of the globe. While there is a gigantic world of liqueurs to explore, we’ve chosen a few of the tastiest liqueurs from around the world and ideas for how to enjoy them.

We adore Chambord, a black raspberry liqueur from France’s Loire Valley. It is a classic liqueur that is easily recognized by its spherical bottle. The Château de Chambord is no less recognizable because of its dramatic French renaissance architecture. Chambord is a wonderful blast of berries, with notes of raspberries, blackberries, blackcurrants, cognac, vanilla, honey, and citrus peel.

We love making Chambord cocktails. It can be as simple as adding a splash to champagne or mixing it into a gin and tonic with a slice of lime. But our favorite Chambord drink is a margarita with a Chambord floater — absolutely refreshing.

This bright yellow Italian liqueur is recognizable for its color and citrusy aroma. Made with lemon zest, a neutral spirit like vodka (especially strong 100 proof versions), sugar, and water, the mixture infuses for days up to weeks. The result is a lemony citrus infusion, sweet and potent. All Italy serves limoncello, but it was first created on the Amalfi Coast and the isle of Capri, areas well-known for their delicious lemons.

Limoncello is really enjoyable on its own and served very cold or on ice. There is also a creamy version, crema de limoncello, for those who like the texture of a creamy liqueur. Both versions can be mixed into a cocktail or even used as an ingredient in various desserts like these cakes.

For fans of the cream-based family of liqueurs, Irish cream is tops. Originally created in Dublin with the flavors of Irish whiskey and cream, this popular liqueur has become a favorite around the world. Bailey’s Irish Cream is one of the best-known brands of liqueur in the world. But it is far from the only Irish cream liqueur. Some have a more vanilla flavor while others have distinctive notes of caramel, butterscotch, or toffee. Bailey’s has expanded its own line to include other flavors such as almond, cherry, vanilla cinnamon, espresso, and red velvet.

Irish cream is a versatile liqueur that can be served on ice or incorporated into cocktails. It’s commonly used in desserts, ice creams, and milkshakes. Our favorite way of using Irish cream is added to a cup of coffee. Top it with whipped cream and snuggle up to comfort on a cold winter night.

A popular German herbal liqueur, Jägermeister incorporates 56 different herbs, roots, and fruits. The blend is left to age in oak casks before alcohol, water, sugar, and other ingredients are added for the finished product. The drink’s inventor was a hunter and created the iconic logo of a stag with a glowing cross between its antlers, a nod to Saint Hubertus, patron saint of hunters.

As befitting its rustic nature, Jägermeister (or Jäger, as it’s called) is often served in frosty cold shots, sometimes alongside a cold beer. Other Jägermeister blends include cold brew coffee and premium Manifest versions. We like the vanilla and cinnamon rendition, Jägermeister Spice liqueur, which though discontinued in the United States is still available online and in Europe.

Curaçao liqueur comes from its namesake Dutch southern Caribbean island. Flavored with the aromatic peel of local Laraha oranges (also used in citrusy beers), the basic liqueur adds a distilled spirit and sugar. Although naturally clear, many producers add colorings such as orange, green, red, and our favorite, blue.

Many delicious cocktails take advantage of blue Curaçao’s lively orange flavor and bright blue color. The Blue Hawaii, Blue Lagoon, and Best Year are only a few vibrant blue drinks that will carry you off to that faraway island. Add a cocktail umbrella to start your vacation with the very first sip.

Mexico is no stranger to fabulous liqueurs. Coffee-flavored Kahlúa, pepper-infused Ancho Reyes, and coconut-rum Kalani are just a few. But here we go off the beaten path for the unique and beautiful hibiscus liqueur. This gorgeous, aromatic liqueur gets its punch from beautiful flowers that thrive in Mexico’s tropical environment. When steeped they provide a tart berry flavor with a touch of citrus. Hibiscus flowers are often used to produce a colorful tea and many people make their own versions at home.

Likely brought from the West Indies or Africa, Jamaica flowers, as hibiscus are also known, find their way into Mexican recipes and cocktails. The bright crimson color and tart berry-citrus flavor enhance Mexican cocktail favorites such as margaritas and boozy agua frescas. Clever mixologists use hibiscus liqueur in a variety of libations from spritzers to shandys.

Another unique liqueur comes from Greece. Mastic liqueur or Mastiha has a subtle flavor like a cinnamony pine forest that comes from the resin of the mastic tree, a small Mediterranean evergreen. Often enjoyed at the end of a meal, the sweet herbaceous elixir is said to be good for digestion. Mastiha carries a protected regional designation from the island of Chios. It is an important Greek asset, used since ancient times in medicines, gums, cosmetics, and more.

Mastic liqueur can be served as a chilled shot and in cocktails for a twist such as a Greek Cosmopolitan that is both earthy and fruity. Mastic liqueur is a secret ingredient in many desserts such as our favorite Greek cookies, sweet and buttery Kourabiethes.

Pimm’s No. 1 is a gin-based fruity spirit incorporating herbs, spices, and citrus flavors. The secret recipe, which remains a secret, was invented by James Pimm in1840 to aid in digesting seafood. Still best known as a British summertime favorite, it often appears as a Pimm’s Cup, a spritzer in a tall glass with herbs, fruit, and notably, sliced English cucumber.

Pimm’s also has a vodka version but it’s not as popular as the original. Beyond the Pimm’s Cup, other cocktails include the liqueur. Added to champagne to make a Pimm’s Royal Cup Pimm’s, the drink shows up at notable British events like the Wimbledon tennis tournament and Henley Royal Regatta as a refined and elegant refreshment.

Our exploration of Portugal’s endless culinary delights has introduced us to many Portuguese liqueurs. The uniquely subtle herbaceous flavors of Licor Beirão and the delightful bitter almond Amendoa Amarga (even more delicious served on ice with fresh lemon juice) are high on our list. But our favorite Portuguese liqueur so far is the sour cherry-based Ginjinha, Ginja for short. Derived from recipes of ancient Cisterian monks, Ginja is often associated with the fairytale town of Óbidos in the center of Portugal, which crafts the liqueur with great care.

Ginja is also a great ingredient for cocktails and other recipes. It’s perfect to punctuate an Old Fashioned or added to a glaze on roast turkey or pork for a special presentation.

Pro Tip: Enjoy Ginja the way many locals do: served in a tiny chocolate cup. The combination of cherry liqueur and chocolate is unbeatable. For a thrill, eat one of the small cherries that are soaking in the bottom of the bottle.

There’s something terribly fun about a bright emerald green liqueur. Even better when it has the delicious taste of yubari and muskmelons from Japan. Midori actually translates into English as “green” so it’s only fitting that green cocktails are the order of the day when using this tasty Japanese liqueur.

Despite its electric color, Midori has a light and subtle melon flavor. It may have gained fame with a splashy debut in the United States at Studio 54 for the Saturday Night Fever launch party, but it still makes for tasty mixed cocktails and dessert creations like Midori cheesecake.

Amarula is a fruit cream liqueur from South Africa. Combining sugar, cream, and fruit of the African Marula tree, locally known as the Elephant tree, it tastes like a mild fruity caramel. Elephants love the scent of the marula fruit and will travel miles to get it. To honor the elephants, Amarula’s logo is an elephant and the producer sponsors the Amarula Trust for environmental, educational, and conservation projects.

Plum-sized yellow fruit is harvested in the spring and the pulp is processed, fermented, and aged in oak barrels for two years. When mature, the spirit is blended with fresh cream to make Amarula liqueur. The original Amarula cream is velvety smooth with notes of caramel and chocolate. Other flavors include vanilla spice, Ethiopian coffee, and raspberry, chocolate, and African Baobab. Amarula is delicious over ice or in coffee and makes a great mixer for cocktails.

We’ve only just scratched the surface of the wonderful world of liqueurs. Fruity, nutty, creamy, and more, liqueurs add a bit of something different to the world of libations. We hope we have inspired you to discover more for yourself and to try what we think are some of the tastiest liqueurs from around the world.

Many of the world’s great destinations feature specialties in food and drink that visitors should sample: 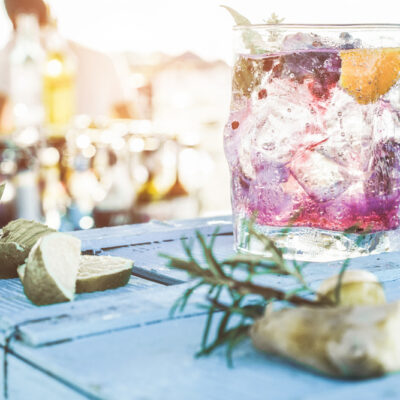 Spirits11 Unique Gins To Try From Around The World