Bridgerton is the period drama that has smashed viewer ratings: In January Netflix announced that it had been watched by 82 million people across the world. If you are one of the 82 million, you’ll know that the reasons for its popularity are not hard to find. This is Regency England, but not as you’ve seen it before.

Like the stories of Jane Austen, Bridgerton has gossip and scandal, high fashion, and families in search of husbands for their daughters. But that is where the similarity ends. Based on the Bridgerton novels of Julia Quinn, this drama also has naked flesh and steaming bedroom scenes; the servants have a voice, and people of color are prominent at all levels of society. (And I can’t be the only one who fell for Regé-Jean Page as the smolderingly attractive Duke of Hastings!)

Bridgerton’s many fans may have wondered where the series was filmed. Surely the streets and buildings of early 19th century London have now been swallowed up in modern development? The answer is that, although some of the scenes were shot in London and elsewhere in the country, much of what you see is actually the city of Bath, in southwest England.

Bath is a UNESCO World Heritage Site and was chosen for its exceptionally authentic and unspoiled Georgian architecture. Even today, you can get a feel for Regency England by walking the city’s streets. And the good news is that visitors can visit many of the places where Bridgerton’s action took place.

The filming locations for Series 1 are listed below. But there may be more to come: there are rumors of filming now taking place across the city for Series 2.

Pro Tip: The city center is compact and easily walkable, although it is an uphill walk to the Royal Crescent and the Assembly Rooms. You can reduce the amount of walking with the Hop-On Hop-Off Bus (city route), which links the main sights.

When it was built at the end of the 18th century, the Royal Crescent was the grandest address in Bath. Today it is regarded as one of the best examples of Georgian architecture anywhere in the country, and it is one of the city’s foremost tourist attractions.

The Crescent is a semi-circle of 30 terraced houses with uniform facades of columns and decorative stonework, overlooking an area of grassland. The opening shots and several background scenes of Bridgerton were shot here. More dramatically, it appears in Episode 4 when we see Simon and Will riding past the Crescent at dawn on their way to a duel with Anthony Bridgerton.

Walk around the Crescent and admire the architecture and its setting. Take the time to look at the plaques outside the houses commemorating the people who lived or stayed here. (The plaque at No 11 tells how — in a scandal worthy of Bridgerton itself — Elizabeth Linley eloped with the playwright Richard Brinsley Sheridan.)

The house at No 1 The Crescent was used for the exterior of the Featherington family’s London home. This building is now a museum that is decorated much as it might have been at the end of the 18th century. Go inside to see how a family home would have been lived in during this era: You can explore the rooms where the fashionable residents lived and received their visitors, as well as the servants’ quarters.

Not far from the Royal Crescent are the Assembly Rooms, built in 1771 as meeting places and entertainment venues. This was where high society would assemble for balls and concerts, to play cards, and — of course — to be introduced to the opposite sex.

Lady Danbury’s ball in Episode 1 of Bridgerton was filmed in the Tea Room. Visitors can explore this room and other public areas, including the ballroom, and stop in the café for lunch or coffee. However check opening times in advance, as the Assembly Rooms are sometimes used for private functions.

Pro Tip: If fashion is part of Bridgerton’s appeal for you, don’t miss the Fashion Museum in the basement of the Assembly Rooms. Once nominated by CNN as one of the top ten fashion museums in the world, it boasts an impressive collection of costumes through the ages.

Walking on towards the city center, you come to Beauford Square, a small garden behind the Theatre Royal. Alongside the square is a quiet road and a row of 18th-century cottages. Characters in Bridgerton frequently ride or walk along this street: It is during one such stroll that we hear Eloise and Penelope trying to fathom exactly what caused Marina’s pregnancy.

Adjacent to Beauford Square is Trim Street, built in 1707 and full of plaques celebrating famous former residents. Jane Austen lived here for a while when her family was in reduced circumstances, but you won’t find a plaque to her because the house has since been demolished. What you will find is the hairdressers at No 12, which became Gunter’s Tea Shop, where Simon and Daphne met in Episode 3. The neighboring Kimberly boutique was the hat shop.

With its cobbles and colonnades, Bath Street is the archetypal Georgian street (the columns on one side are actually modern, but you wouldn’t notice at first glance). So it is not surprising that it is featured in many street scenes. Look out for its first appearance as Simon rides into town in Episode 1.

The Abbey Green was built in the 17th century as a gated courtyard behind Bath Abbey. Today its central grassed area (with a tree planted in 1793) is surrounded by cobbles and tiny shops reminiscent of the Victorian era. In Bridgerton it stands in for London’s Covent Garden. The characters can frequently be seen walking past the market stalls, and in Episode 5 Simon lurches drunkenly through the modern arch at the end.

However, the star of the Green must be the Abbey deli, with its bay windows and stepped entrance. This appears as the Modiste Dress Shop (both inside and out), where the ladies of Bridgerton are fitted for gowns while exchanging gossip. Follow in their footsteps by stopping for a light lunch, or just a coffee and cake.

Before you move on have a look at the doorway of the house to the right of the deli. This is where we witness Anthony and his lover Siena exchanging a passionate embrace in Episode 4.

The current Guildhall (replacing an earlier building) was constructed between 1775 and 1778. Although it is now used for administrative purposes, it has some very grand rooms. These include the Banquet Room, an ornate space with pillars, chandeliers, and artworks, which was used for interior ballroom scenes including the Rambury Ball in Episode 2.

Pro Tip: If you want to look at the Banquet Room, just enquire at Reception during working hours. If the room is not being used for a function, you are likely to be allowed in for a quick look. Alternatively, if you are in Bath during one of the numerous festivals (such as the Bath Festival or the Literature Festival), many concerts and other events take place inside the Guildhall.

Finally, cross the river via the Pulteney Bridge (one of only four bridges in the world with shops on either side) and walk along the magnificent Great Pulteney Street towards the Holburne Museum. This was originally the Sydney Hotel, built in 1799 as an entrance to the newly created pleasure gardens. Today it is a museum and art gallery, with 18th-century paintings and other collections.

In Bridgerton, the front of the Holburne Museum is the outside of Lady Danbury’s townhouse. We see her here in conversation with Simon during Episodes 1 and 2. (Film crews have recently been spotted outside the museum and it is hotly tipped as a location for Series 2.)

Visitors can enjoy the museum and the former pleasure grounds — now the Sydney Gardens. And the museum café is an excellent place for a drink or a meal.

Pro Tip: If you don’t want to explore on your own, several companies are now offering Bridgerton-themed tours. The tours recommended by the local tourist authority are those run by Bath Walking Tours, with all walks taken by accredited guides.

The history, architecture, and legends that are prevalent in London make it a popular European destination: 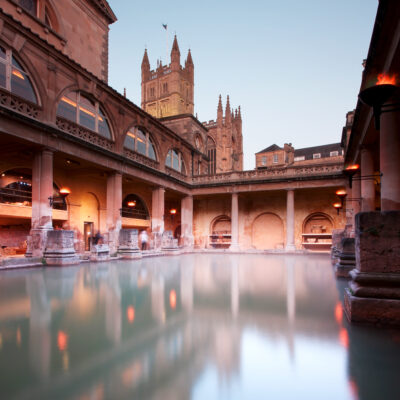 BathHow To Spend A Romantic Weekend Getaway In Bath, England 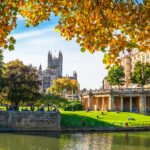