The Abandoned Underground City In Ellinwood, Kansas Is A Must-Visit

It’s the late 1800s in Ellinwood, Kansas, a town German immigrants call home. Sitting in the center of Kansas on the Santa Fe Trail, teamsters and cowboys pass through, stopping in for banking, the barber, a bath, and perhaps the brothel.

As sometimes happened in towns with German-Austrian roots, Ellinwood was built on two levels. As a result, the town’s residents functioned in the street-level businesses, while the transients took their business underground.

From 1887 to about 1920, a whole community existed underneath Ellinwood’s sidewalks — a labyrinth of tunnels and businesses, primarily for men. In today’s terms, it was the ultimate man cave. As the railroads took over, jobs for cowboys and teamsters declined, and underground Ellinwood became less active.

Note: My visit to Great Bend was a hosted trip by Great Bend, Kansas. The opinions offered are based on my experience.

Beneath The Ellinwood Emporium

The Ellinwood Underground Tour includes two stretches of the original tunnels. The remaining tunnels contain several rooms on each side of the street. At the present day, the tour starts at Ellinwood Emporium, an antique and consignment shop. The underground terrain on this side of the street is uneven and dusty.

As you descend into Tom Drake’s Harness Shop, imagine the smell of hot metal and smoke as the blacksmith worked. Today, they stage the shop as it was between 1890 and 1900, with artifacts authentic to the period. Many are original to the location, where you’ll find wood and metalworking tools as Tom Drake would have used.

While the tunnel to the Wolf Hotel from this side of the street is bricked off today, you’ll find more rooms on this side, Jung’s Barber Shop, and Ellinwood Bathhouse and Laundry. Here is where the hidden cowboy life existed. Although it’s interesting to see the walls riddled with bullet holes, you can only imagine what might have happened beneath the street. While waiting your turn for a haircut or bath, you could play cards with your friends, have a smoke, and drink. In addition to getting a shave and haircut, you could get a tonsillectomy with a shot of whiskey for an anesthetic and then recover in a wheelchair. The original barbershop chair and a wheelchair are still there today.

It was dusty, dirty work in the Old West, and cowboys and teamsters needed a place to take a bath and have their laundry done while on the road. Jung’s Barber Shop and Ellinwood Bathhouse and Laundry were those places. Cowboys could get a bath, a piece of lye soap, and a towel for 15 cents. To save money, they had the option of being the second person to use the bathwater.

Initially, the tunnels ran under two blocks of Main Street, on both sides of the street. In addition to the harness shop and other services, the tunnels were home to a bootmaker shop, 11 saloons, and a brothel.

The rooms beneath the 1894 historic Wolf Hotel are finished to today’s standards, and the floors easier to navigate. You’ll find a speakeasy that operates today as the newly renovated Underground Saloon, run by the Wolf Hotel. The other rooms include the library and sample rooms, where salesmen coming via the railroad could display their merchandise. The Wolf Hotel is listed on the National Register of Historic Places.

To get a sense of the Old West and what guests might have experienced as they arrived in Ellinwood on the Atchison, Topeka & Santa Fe Railroad, reserve a night at the historic Wolf Hotel. Every third Sunday of the month, enjoy lunch served family-style in the hotel dining room, complete with wheat-shaft trimmed columns and dinnerware. The staff wears period-style clothing while serving a fried chicken or chicken-fried steak dinner, complete with all the sides. The hotel is the perfect place to experience historic Kansas.

To tour the tunnels on both sides of Main Street, you will need to go down a flight of stairs and then return up the same stairs, once on each side of the street, as you see rooms on each side. Unfortunately, today there isn’t a tunnel connecting the two sides of the road, making additional stair climbing necessary. Plan on 90 minutes for the complete tour.

Great Bend, Kansas makes a great home base to explore the area, and Ellinwood offers the perfect day trip from Great Bend.

Pro Tip: Since tours are at 11 a.m. or 1 p.m., you may want lunch directly before or after a tour. The perfect place for lunch is Gather, just down the street from the Ellinwood Underground Tours. They serve a variety of wraps and paninis and have an old-fashioned soda fountain. They close at 2 p.m. 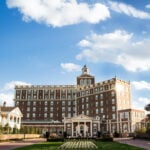 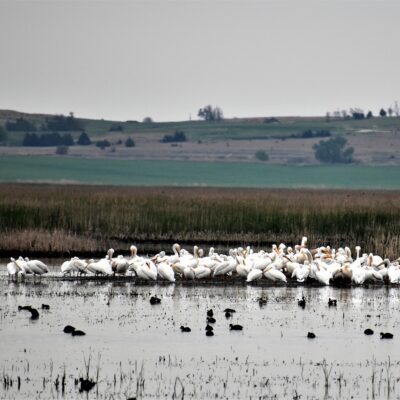 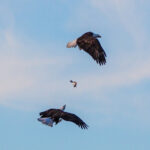