I was all of eight years old when I made my first Prince Edward Island foodie memory. It was on the first day of our family vacation, and our Charlottetown bed and breakfast welcomed us with ice-cold pink lemonade and chocolate mint wafer cookies. To say that I was overwhelmed by the glamour of it all would be an understatement. (The lemonade was pink!) I still remember my mother chastising me for reaching for a second helping of the thin, crispy cookies. She was obviously immune to their fancy charms, but I certainly was not.

That was the first of dozens of trips to Prince Edward Island, and with each visit, I’m reminded of just how welcoming Islanders are and what a knack they have for serving just the right thing at every occasion. While nothing will come close to topping my memory of the fancy lemonade and cookies, the following foods and flavors have earned a place in my heart, and every PEI visitor should indulge (and even reach for seconds, if they so choose!).

Prince Edward Island is Canada’s leading producer of potatoes, and “the spuds from the red mud” are proudly served across the island. Chip wagons make their French fries with fresh potatoes, and you can expect every restaurant to have their own special twist on mash. I love keeping an eye out for potatoes in unexpected places, like potato scones, donuts, and cakes. (For those curious, you don’t really taste the potatoes. They just act like the moist part of the batter. But it’s still fun to try!) But the dish that best highlights the PEI potato is…

2. Fries With The Works

Canada is famous for serving up poutine, a Quebecois dish of French fries topped with cheese curds and gravy. In Newfoundland, you can order fries-dressing-gravy, a dish that replaces the cheese curds with dressing (much like turkey-dinner bread stuffing). And on Prince Edward Island, you can get fries with the works (FWTW).

There are a number of different stories of how, exactly, this dish came to be, but I suspect that, much like poutine or fries-dressing-gravy, it’s a case of working-class folk coming up with something hot and hearty, while avoiding food waste and steep prices. A true plate of FWTW starts with French fries made from PEI potatoes. The dish is then topped with gravy, ground beef, and canned peas (never fresh!). If you’ve enjoyed a hot hamburger sandwich platter at an old-fashioned diner, you’ve gotten a glimpse of FWTW’s flavor profile. It’s rich, salty, and has a stick-to-your-ribs quality. It’s also messy. Very messy.

Pro Tip: If someone asks if you want to “top up” your FWTW, they’re asking if you want to add anything else to the mix, like cheese curds, mushrooms, or pulled pork.

The PEI lobster supper originated at church halls and community centers, where platters of fresh lobster and ample sides were sold during fundraisers. The tradition has become so popular that an entire industry has developed around this meal. Visitors to a PEI lobster supper hall (such as those found in New Glasgow) can expect an entree (ham, salmon, and steak are just some of the lobster alternatives), seafood-focused appetizers like chowder and mussels, lots of salad, traditional sides like soft dinner rolls and potatoes, and dessert with tea or coffee.

While going to a full-service lobster supper is all but mandatory on a visit to Prince Edward Island, if you have the chance to eat lobster with a local, jump on it. Chances are, you’ll be enjoying a lobster boil on the beach or in someone’s backyard, and the menu will consist of lobsters (lots of them!), melted butter for dipping, and a few simple sides, like potato salad, rolls, and coleslaw. You won’t find a finer meal anywhere.

If you prefer lighter fare, lobster rolls are available across the island, from formal restaurants to food trucks. A proper PEI lobster roll is served on a toasted bun with a generous helping of chunky meat, lightly tossed with mayonnaise. There might be a smattering of chives, some celery, or a drizzle of lemon, and you’ll usually get a handful of potato chips or fries on the side. Lettuce is rather controversial, but the general consensus is that the best lobster rolls leave it out. Local residents will be more than happy to recommend a favorite spot.

Prince Edward Island is a prime destination for seafood lovers. In addition to lobster, visitors are spoiled with crab, scallops, clams, mussels, and fish like trout, haddock, and salmon. But nothing can top PEI’s oysters. They’re world famous, and justifiably so. Malpeque Bay, Raspberry Point, and Colville Bay are just some of the legendary names that foodies will be familiar with.

You’ll often see Charlottetown pubs advertising “buck a shuck” ($1 oysters) during their happy hours. While I would never steer anyone away from a great deal (or a pub!), oyster newbies will want to head to a small shop or restaurant to try different kinds of oysters and get a sense of their preferences. Alternatively, you could plan your visit for mid-September to celebrate the PEI International Shellfish Festival and be spoiled for choice.

My first visit to Prince Edward Island will forever be remembered for the fancy cookies and lemonade, but it’s also when I was first introduced to another PEI delight: COWS ice cream.

Famous for their cow-inspired, punny flavor names (like Caramoo Apple, Cowconut Cream Pie, and Moo York Cheesecake), COWS is often described as the best ice cream in Canada. As someone who never passes up the opportunity to enjoy a cone, I have to say I agree! Both the blueberry and strawberry flavors are made with PEI berries and come highly recommended.

COWS also sells chocolate-dipped potato chips, butter made from local milk, and Cheddar cheese. It’s not just any cheese. Their Avonlea clothbound Cheddar is consistently named the best in its class in North America. Cheese-a-holics will want to note that you can take a tour of the COWS dairy and see how the cheese is made.

Sure, PEI might be world famous for its potatoes and seafood, but there’s very little that doesn’t grow on this tiny island, including dozens of fruits and berries. Just pop by any farmers market or roadside farm stand to see just how many varieties are grown here! There are delicious jams, jellies, pies, crisps, and cobblers everywhere you go.

Of all the tempting desserts made from local fruit, the raspberry cream cheese pie might be the most unique (and arguably the most delicious, but who am I to pick favorites?). It’s like a two-layer cream pie where the bottom layer is a cheesecake-like custard and the top layer is raspberry pie filling, and it’s crowned with whipped cream. Look for it at The Preserve Company or any number of small cafes and bakeries. You can even try your hand at making it at home before you go.

Speaking of raspberries, don’t forget to try a bottle of PEI raspberry cordial. This refreshing raspberry soda is the modern interpretation of the drink made famous by Anne of Green Gables. You’ll find it in grocery stores, corner shops, and cafes across the island.

Speaking of pie, cranberry raisin pie (also known as “mock cherry pie”) was a favorite of author Lucy Maud Montgomery and her family. You can still find it at bake sales and the odd cafe on PEI, and you can even make it for yourself at home using Montgomery’s recipe.

If you’re visiting Prince Edward Island in part because you loved Anne of Green Gables and other works by Montgomery, you’re not alone. I was an Anne mega-fan on my very first visit. Anne-inspired treats are available across the island. In addition to raspberry cordial, you’ll find plum preserves (alas, Marilla’s famous plum puffs are seldom seen), russet apples (like Anne enjoyed by the fire with Matthew), chocolate-covered caramels (like Anne shared with Diana), and elegant chicken salad sandwiches and finger sandwiches (like those enjoyed by Anne and others at the fictional White Sands Hotel). 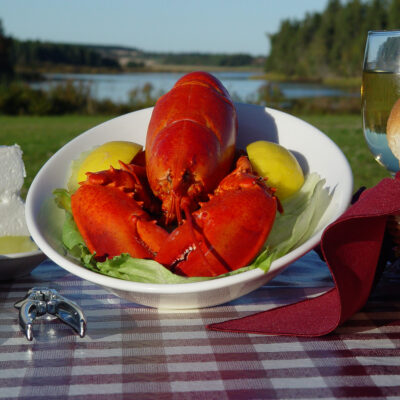 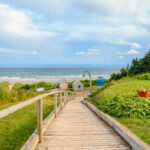 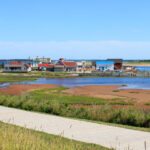 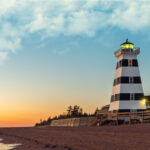