Pretty Nova Scotia, Canada’s second-smallest province, is famous for its hospitality. A trip to this East Coast destination means endless cups of tea in seaside cafes, watching new friends pull boiled lobster from a scruffy pot over a beach bonfire, and indulging in sweet after sweet at community festivals, from apple crisps made with local fruit to crumbly date squares. But as you eat your way across the province, you’ll notice that there are some dishes that stand out from the rest. These Nova Scotia specialties aren’t likely to be found anywhere else.

I know this all too well, since I grew up in Nova Scotia and always keep my eyes open for these personal favorites when I travel, without much luck! So if you’re fortunate enough to visit Nova Scotia, search for these special treats.

Sweet and tangy, Nova Scotia’s green tomato chow chow might just be the best condiment you’ve ever had. With its base of green tomatoes, onions, sugar, and spices, chow chow falls somewhere between a chutney and a relish. It perfectly enhances fish cakes, Acadian meat pies, and cold plate lunches, and you can find it at farmers markets, roadside stands, and gift shops.

If you want to make chow chow at home, this recipe showcases how each family has their own variation on the basic recipe, so don’t be afraid to add your own twist to the finished product. If you’re feeling ambitious, you can also try making mustard pickles, a tangy, mustardy kind of relish made with cucumber and cauliflower that’s popular on Cape Breton Island.

These old-fashioned dishes with funny names are sure to jump out at you if you see them on a Nova Scotia menu. Alas, they’re not as common as they once were, but you’ll still find them along the province’s southern shore and in fishing communities like Lunenburg.

Solomon Gundy is pickled salt herring prepared with pickling spices, salt, sugar, and vinegar. Everyone has their favorite way to eat it, but I think it’s best enjoyed spooned on top of crackers with cream cheese. You can learn how this unique dish got its equally unique name here.

Finnan Haddie is smoked haddock served with a rich creamy sauce and often accompanied by boiled potatoes. However, you could easily use fresh fish and still have delicious results (as this recipe demonstrates). Finnan Haddie is increasingly hard to find at eateries. If you happen to see it on a cafe menu, jump on it!

When it comes to rappie pie, you can expect some strong opinions. For Acadians in southern Nova Scotia, especially those in and around Yarmouth, rappie pie is at the heart of their culture and family life. The mix of potatoes and meat is comfort food at its finest.

But for Acadians in Cape Breton (northern Nova Scotia), rappie pie isn’t as popular. In fact, it’s often strongly disliked! As an Acadian from Cape Breton myself, I must confess I’m among those who dislike rappie pie. But in the interest of culinary exploration, I think it’s well worth trying (or, as this story points out, trying again).

At first, rappie pie sounds a bit like shepherd’s pie. Potatoes and meat are layered and baked in a casserole dish. But that’s where the similarities end! The potato topping is grated and then squeezed in cheesecloth to remove all moisture. Then it’s rehydrated with broth before being layered on top of seasoned meat (like chicken or rabbit) and topped with pork fat. The result, depending on your point of view, is either love-infused homemade goodness or a bit of a gloppy mess. If you’re up for trying it, look for homemade rappie pie that’s golden brown and crusty on top, and consider topping it with some butter and even a dollop of molasses.

In Nova Scotia, a mishmash of vegetables is appropriately called hodge podge! This homestyle favorite includes veggies like potatoes, green beans, carrots, and peas simmered in a creamy butter sauce. This luxurious bowl of stewed vegetables is popular as a side dish, a potluck contribution, or a vegetarian main course and is especially nice when made with late-summer vegetables and baby potatoes.

If you want to make a Nova Scotian angry, tell them that a Halifax donair is the same thing as a shawarma or gyro or doner kebab. Halifax donairs are in a class all their own, and they may just be Nova Scotia’s favorite food. Thin slices of shaved, seasoned, spit-roasted beef are piled on top of a soft, warm pita. Tomato and onion are added, and the whole thing is finished off with donair sauce. This sauce makes all the difference, and Nova Scotians go crazy for it. A mix of condensed milk, garlic powder, and vinegar, it’s amazingly sweet and tangy at the same time.

Move aside, tarts and pastries. Pork pies are the sweetest treats you’ll ever want to eat. A gooey whipped date filling sits in a tiny, dense, shortbread shell, and a dollop of maple icing finishes off the bite-size treat. Despite the name, there’s no pork in a Nova Scotia pork pie. However, they’re so rich and luxurious, you’ll think you’re living “high on the hog” when you eat them. You’ll find pork pies at bakeries and cafes across the province.

Walking the fine line between sweet and salty, a Nova Scotia oatcake is a seemingly simple snack that’s devilishly tricky to get just right. Too much sugar, and it becomes an oatmeal cookie. Too little, and it’s depressingly plain. Around Halifax, oatcakes are thick, slightly chewy, and occasionally drizzled with chocolate. But up north on Cape Breton Island, they’re thin and crispy, the salty butter mixing with the sugar to make a complex teatime delicacy.

Speaking of oats, on the off chance that you’re in a rural, Gaelic-speaking area of Nova Scotia on Halloween, ask around to see if anyone is celebrating with fuarag. Fuarag is a nearly extinct culinary tradition. A large bowl of whipped cream is lightly sweetened with brown sugar and thickened with raw oats, and tiny tokens are hidden within. All guests get a spoonful to eat and, should you be lucky enough to find a token (like a ring, button, coin, or thimble), it’s considered good luck and an indication of what you can expect for the coming months. I remember trick-or-treating and being offered a spoonful of fuarag in lieu of a traditional treat bag!

Nova Scotia is one of the world’s leading blueberry producers, and it’s no surprise that everyone in the province goes crazy for berries each summer. The humble blueberry grunt is a true Nova Scotia specialty. This stovetop dessert is traditionally prepared with the fruit layered on the bottom and soft dumpling dough dolloped on top. Firmly sealed to keep in the heat, the fruit is said to “grunt” as it bakes in the steam beneath the dough. Of all the foods on this list, blueberry grunt is the easiest to make at home, no matter where you are in the world.

One only-in-Nova Scotia specialty I think every traveler should try is my beloved personal favorite: Moon Mist ice cream, pictured in all its glory up top.

A fetching mix of pastel yellow, purple, and robin’s egg blue ice cream, Moon Mist truly looks and tastes out of this world (no, I’m not the first to make that pun!). The swirls of banana, grape, and bubblegum ice cream come together to make a phenomenal flavor that’s much more than the sum of its parts. Year after year, this is the best-selling ice cream in Nova Scotia, and you’ll see everyone from kids to seniors enjoying it at beachside huts, in village cafes, and on urban boardwalks.

Pepperoni isn’t exactly a Nova Scotia-only item. However, Nova Scotians are passionate about their hometown favorite, Brothers Meats pepperoni. Enjoy it on pizza and deep fried as an appetizer with mustard dipping sauce. But take care if you bring it to your hotel room — just look at what happened when 40 gulls got ahold of this Nova Scotia favorite! 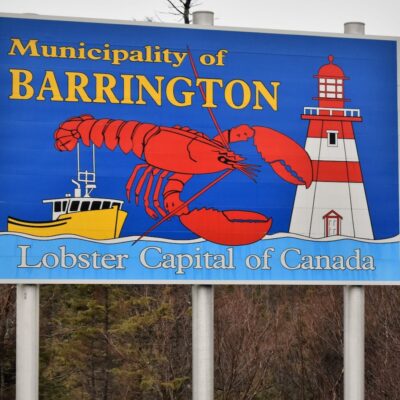 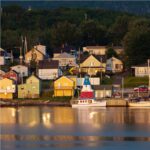 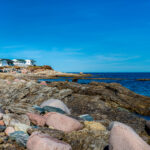 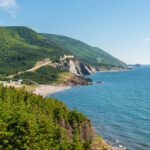