When it comes to celestial events, it’s pretty tough to top a Super Blood Moon. That’s the unofficial name for a total lunar eclipse that takes place when the full moon is in its closest orbital position to Earth — making it appear larger and brighter than other full moons.

Know what’s even cooler? How about this: Seeing the Super Blood Moon from 40,000 feet on a Boeing 787 Dreamliner airplane that “is ideal for moongazing”?

Now, here comes the good news as well as the bad news. First the good news: Yes, there is such a flight — known as the Supermoon Scenic Flight — offered by Qantas. It departs from and lands in Sydney, Australia. Now for the bad news: All 100 seats on the three-hour flight were sold in less than three minutes.

The moon’s orbit around Earth is elliptical, not circular. Although the distance between the moon and Earth varies throughout the month and even the year, the average distance is approximately 238,000 miles, a timeanddate.com article explains.

Since the moon has an elliptical orbit, however, there are times when it is closer to Earth than others. The point on the Moon’s orbit when it is closest to Earth is called the perigee. When the moon is full when it reaches that point, it’s called a supermoon. Due to its location, a supermoon will appear about seven percent larger than any other month’s full moon, and it will be approximately 15 percent brighter than other full moons.

“During the eclipse, the full moon goes into the dark inner shadow of Earth,” Michael Shanahan, the planetarium director at the Liberty Science Center in New Jersey, told The Today Show. “However, while our atmosphere blocks the shorter wavelengths such as blue light, it does allow the longer wavelengths of red light to pass through our atmosphere and continue on to the moon. So the moon often turns an eerie copper color during these total lunar eclipses.”

Qantas’s Supermoon Scenic Flight promises to be a truly unique experience. The flight will take off from Sydney, and after passing over the scenic Sydney Harbour, will climb above any cloud cover and head east out over the Pacific Ocean, Qantas explains. Along the way, travelers can enjoy “cosmic cocktails and supermoon cakes.”

More interestingly, astronomer Dr. Vanessa Moss will work with the pilots to design the optimal flight path over the Pacific Ocean and also join the flight “to provide insights into supermoons and all things space and astronomy,” Qantas explains.

“We are very excited to now be doing a supermoon scenic flight and the 787 has the largest windows of any passenger aircraft, so it’s ideal for moon gazing,” Chief Customer Officer Stephanie Tully said. “We think this flight has great appeal for anyone with a passion for astronomy, science, space photography, aviation, or [who’s] just keen to do something a little ‘out of this world.’”

That certainly appears to be the case. Fare for the flight began at $499 for economy and ranged up to $1,499 for business seating.

Despite the price, tickets sold out in 2.5 minutes, a CNN article reports. After that, the airline created a waitlist, but that was quickly closed as well, according to Qantas.

How To View The Super Blood Moon

It won’t be nearly as exciting as seeing the Super Blood Moon from the luxury of a Boeing Dreamliner, but you can still see the total lunar eclipse — providing the skies are clear and you are in parts of the western U.S., western South America, Australia, or Southeast Asia. If so, you’ll be able to see the Super Blood Moon — when the supermoon is totally eclipsed — for about 14 minutes on May 26. The eclipse will begin at 4:47 a.m. EST.

If you are east of the Mississippi River, the moon will be very low or even below the horizon during the eclipse, so it may not be visible. You can use this interactive map to determine when and how much of the total lunar eclipse will be visible from your location. Inspired? Get other celestial events on your calendar with all our stargazing content here. 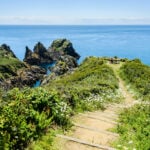