9 Reasons To Fall In Love With The Country Of Georgia

Georgia is a country at the intersection of Eastern Europe and Western Asia that’s been inhabited since the Bronze Age. Thousands of years of history and many civilizations have left their mark in Georgia, which makes it a particularly interesting country for history fans. Those who love nature will fall in love with it, too, because in the relatively small country you find the beaches of the Black Sea coast, the wild Caucasus mountains, Krubera Cave, known as the world’s deepest cave, swamps and snow-covered glaciers, woods, and orchards.

Georgian hospitality is proverbial, as reflected in the tradition of supra, communal dining where everybody is invited. The head of the table has one major duty: to make sure everybody has enough to drink and eat and is having a good time. This applies to celebratory supras as well as those held after funerals.

Georgia is one of the world’s oldest wine-producing countries, so expect to have your fill of wine tastings. If art and architecture are your favorites, you won’t be disappointed either. From ancient ecclesiastical art and cross dome architecture to 20th-century primitivist painter Niko Pirosmani, there is something for every taste.

Last but not least you will love the colorful capital, Tbilisi. Located in the south Caucasus on the banks of the Kura River, Tbilisi is famous for her mix of medieval, neoclassical, and Nouveau Art buildings, plus the Tatar bazaar and modern shopping.

The best time to visit any part of the country is from May to September. The local currency is the Georgian Lari and by law, goods and services have to be paid for in Lari. The local language is called kartuli ena, and Georgians don’t use our alphabet. However, the younger, urban generation speaks good English but in remote parts … not a word.

It’s hard to find a country that offers such great variety in only 27,000 square miles, slightly smaller than South Carolina. Here are my favorite reasons to fall in love with and vacation in Georgia.

Eating and drinking is an important part of any travel, and in Georgia, you are in for a feast. The moderate climate and moist air favor the cultivation of vineyards, especially in the regions of Kakheti, Kartili, and Adjara. The method called maglari involves grapes actually growing up the trunks of fruit trees and the ripe grapes hanging off the branches. The wines are available anywhere in Georgia, but many people make their own.

As far as food is concerned, meat, cheese, fruit, and vegetable prevail, and Georgian food is often quite spicy. A specialty not to be missed is khachapuri, a multi-layered bread with melted cheese and an egg cracked on top, or the delicious meat dumplings called khinkali.

Georgians are a hospitable people, and if you are lucky, you’ll get invited to a special feast called supra. What’s known as a Georgian table is a communal meal in someone’s house which can last for hours when dish after dish is served, accompanied by rivers of wine. The occasion can either be a celebration, like a birthday or wedding or a funeral. You are well-advised to make local friends in Georgia, which is easy as they just love visitors, to get an invitation to this age-old tradition. It’s also an opportunity to listen to the distinctive Georgian songs and music.

3. Be Enchanted By Svaneti

High up in the Caucasus mountains, the region of Svaneti works its magic. Inhabited for thousands of years and many times fiercely disputed because of its strategic position, Svaneti features dozens of medieval watchtowers that wealthy families erected on top of their houses to defend against attackers. They once even withstood the Mongols. You can hike here at your heart’s content and visit the villages of Ushguli and Mesti to see the local museum. Not so long ago, this fascinating region was difficult (and dangerous) to reach, but recently, the government has built a far better road to the capital, and as a result, tourism is increasing. Another adventure is taking the Hatsvali Lift up to Georgia’s highest restaurant.

But that’s not all. Here you also find the Chalaadi Glacier, the Tower of Love, and the Enguri Dam. If you prefer to venture into this wild wonderland with a guided tour, Highlander Travel offers some of the best with several possible variations and routes.

4. The Charm Of A Somewhat Different Beach

Georgia is one of the six countries that border the Black Sea. Batumi is the most popular beach resort, and after all the hiking and adventures in the Caucasus mountains, you’ll want to relax on the beach for a while. If you are looking for long, white, sandy beaches, you are in the wrong place. Batumi Beach is made from pebbles. But the sea is crystal clear and the true charm lies in the town itself and its surrounding..

There is a four-mile-long Batumi Boulevard, which is a joy to walk, with the Alphabetic Tower at the end. It’s decorated with the alphabet of the kartuli ena language, and you can climb up to enjoy the view. Next, just north of Batumi is the Botanical Garden with its bamboo forest and the lively art scene in the old town. Plenty of cafes invite you to rest and watch the locals embroiled in a fierce game of chess. Again, you will notice how friendly people are. Everybody will talk to you and give you advice, and you may even get invited to a supra. In between these other activities, step over the pebbles, spread your towel, and have a dip in the pleasantly warm sea.

In the Kakheli region near the border with Azerbaijan lies the sixth-century David Gareji Monastery. The vast complex on a hillside comprises hundreds of dwellings and churches, most of them caves carved into the rock. The entire complex is not free of disputes as to which country this remarkable work of art belongs to, but that shouldn’t deter you from visiting and admiring the still-preserved frescos and monks’ cells. The Monastery was, after all, a center of religious and cultural activity of great importance, and you will be impressed by the sheer size of the complex.

6. The Cave Homes Of Uplistsikhe

Georgia is full of surprises, and the 5,000-year-old cave homes of Uplistsikhe near Gori are among them. The vast complex can be divided into its lower, middle, and upper parts, all of which are connected with cave tunnels. It was inhabited until the 13th century A.D. and, after the conquest by the Arabs, became the seat of the Kings of Kartli. It’s abandoned today but remarkable for its cut-rock structures, not unlike those in Cappadocia/Turkey and Northern Iran. In pre-Christian times, this was a center of worship of a sun goddess, and later several churches were built here. After being destroyed by the hordes of Genghis Khan, Uplistsikhe was buried under sand and dust until excavations in the 19th century brought it to light again.

7. The Thrill Of The World’s Deepest Cave

Located in a remote place in the Arabika Massif of the Gagra Range of the Western Caucasus, you can find the world’s deepest cave, Krubera. At a depth of 7,200 feet, naturally, you can’t descent yourself. This is left to many expeditions of geologists who have explored greater and greater depths over the years but think they have not reached the bottom yet. Even though you can’t descend yourself, it’s an incredible feeling to know you are standing on top of one of the deepest places on earth.

8. Lose Yourself In Tbilisi

Georgia’s capital is a city with many faces set against a dramatic hillside. Take your time to explore the Old Town with impressive churches, monuments, and buildings. Make your way up the hill, either on foot or by cable car, to see the Narikala Fortress or the Botanical Garden. Back in town, enjoy a bath in thermal sulfur springs at the end of Rustaveli Avenue, visit the flea market under the Dry Bridge, and look at the leaning clock tower next to a marionette theater. Have a rest at one of the many cafes before crossing a bridge over the Kura River into the modern part of Tbilisi, where you will find examples of brutalist architecture that are a stunning juxtaposition to the architecture of the old town. If that isn’t enough, you can also visit the Leghutakhevi waterfall. You don’t often find a waterfall in the middle of a city!

9. Land Of Legends And Mysteries

Who doesn’t want to visit a country that is shrouded in legends and mysteries? Georgia’s landscape and long history are naturally steeped in many such tales. One refers to the medieval Ananuri Castle, just 55 miles north of Tbilisi on the Araguri River. When the castle was under siege, it was not defeated because a secret tunnel led to the water and thus provided a way to get food and water to the people who had taken refuge in the castle. The enemy finally captured a woman named Ana, who was from Nuri, and tortured her to reveal the location of the tunnel. But she chose to die rather than giving the secret away. Hence the castle was called Ananuri, and she became a legend.

There are few traffic lights and pedestrian crossings in Tbilisi. Use the underpass in Rustaveli Avenue or cross close behind a passing car, but be very careful. If you get lost anywhere, ask the locals. People will be eager to help you, and if someone doesn’t speak English, they’ll find someone who does. Georgia is not an expensive country, but make sure you have plenty of cash in the local currency.

Considering a vacation in Georgia? See why it made travel experts’ list of 27 top under-the-radar destinations, plus tips for visiting nearby Turkey, Armenia, and Azerbaijan. 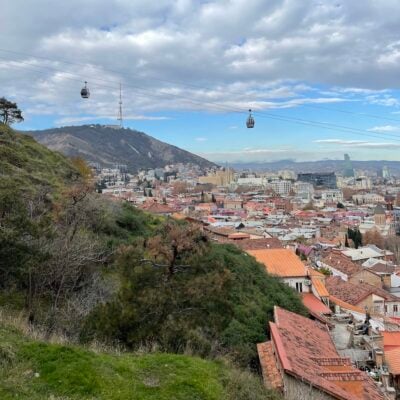 GeorgiaHow To Spend An Incredible Weekend In Beautiful Tbilisi, Georgia 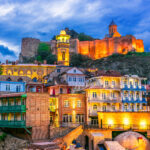