These Breathtaking Rainbow Colored Mountains Are A Fascinating Geological Wonder

They may look like something out of a Dr. Seuss story — or as locals say, like “God overturned his palette” — but the Rainbow Mountains of China are real.

China Highlights explains that the Danxia (pronounced dan-sshyaa, which means “red cloud”) landform area, which covers about 19 square miles, is part of Zhangye Danxia National Geological Park. The park is a UNESCO World Heritage Site and attracts visitors from around the world for good reason — the mountains have red, yellow, blue, white, and green stripes.

How The Mountains Were Formed

As is always the case with spectacular geology, the Rainbow Mountains took millions of years to form.

Eons ago, the area was part of the ocean floor. Over time, as the Earth’s tectonic plates shifted, mountains were formed and rose above sea level. Next, over millions of years, sandstone and other mineral sediments were deposited in layers of different colors.

By the way, China isn’t the only place where you can find a rainbow-colored mountain. Deep in the Peruvian Andes, Vinicna Mountain — known as Montana de Colores or Rainbow Mountain — was formed in the same way.

How To See The Rainbow Mountains

Zhangye Danxia Landform Geological Park is about a 30-minute car ride from the city of Zhangye, in northwestern China’s Gansu Province. It’s also possible to get to the park by bus.

“The park has five sightseeing platforms but the first is the largest platform and the nearest to the entrance, at 10 minutes’ walk away,” China Highlights explains. “You don’t need to walk up many steps to get to the viewing platform. It’s practically at ground level and you can see the high, colorful mountains from there.”

The Best Time To See The Mountains

Winter in Zhangye is very cold and many months are dry and windy. With that in mind, the best time to visit Rainbow Mountains is from June to September, according to China Discovery.

“The best hours for sightseeing are the early morning and late afternoon when the temperatures are lower, and colors are clearer,” China Discovery advises. “The most beautiful moment is sunset — when the golden sunlight shines on the red mountains.”

Due to the ongoing COVID-19 pandemic, China is open but with numerous stipulations. Right now, foreign nationals can travel to China only if they hold a valid Chinese residence permit for work, personal matters, or reunion; hold a diplomatic, service, courtesy, or C visa; or hold a valid visa issued after March 28, 2020. 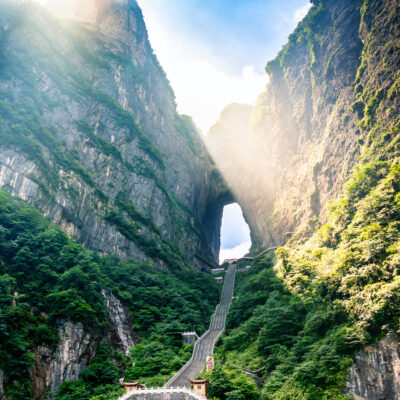