Regina, Saskatchewan’s capital city, rises out of a flat, alluvial plain in southern Saskatchewan. Approaching Regina on the Trans-Canada Highway is like turning the first page of an ordinary book and finding that you’re reading a magical pop-up book instead. The land is flat, and then a city appears. Here are a dozen reasons to explore Regina (pronounced ruh-JINE-uh). The oasis city beckons visitors to rest under the shade of its numerous trees and play in its parks, explore its fascinating attractions, and root for the Roughriders.

Winter offers plenty of activities. Ski cross country on Regina Ski Club’s trails. Skate or play hockey at the City of Regina’s numerous rinks and arenas. Snowshoe at the Wascana Valley Nature Recreation Site about 6 miles northwest of the city.

Stroll through the fall colors in autumn and explore Saskatchewan’s waterways after the ice breaks in the spring. Wascana Centre includes trails and boat rentals. Many of the city’s main attractions are in the Wascana area.

But summer is the best time to visit. Regina is full of flowers because the City of Regina plants 40,000 plants annually. Summers are mild with cool evenings. Even in the summer, bring a jacket.

2. Its Fascinating History: From A Pile Of Bones To The Queen City

First Nations hunters stacked bison bones at Wascana Creek, honoring the animals’ spirits. They called the site Oskana ka-asasteki, which translates to Pile of Bones. Later, Princess Louise named the city after her mother, Queen Victoria. The queen’s Latin title was Victoria, Regina et Imperatrix (Victoria, Queen and Empress). The Princess and her husband, the Marquis of Lorne, rode the first passenger train into Regina.

3. Study The Mounties’ Stories At The RCMP Heritage Centre

The RCMP, nicknamed the Mounties, are Canadian icons. Their red serge dress uniforms and their Stetson hats shout Canada. (Mounties’ Stetsons are equivalent to American “Smokey the Bear” hats.) Every Mountie passes through basic training in Regina, and the RCMP has built its Heritage Centre in the city.

The centre takes guests through the Mounties’ history, from their 1873 founding to the present day. I particularly enjoyed dressing up in the RCMP dress uniform. My other favorite exhibits included sled dogs, horses, and motor vehicles’ role in law enforcement, and the Mounties’ actions during the Klondike gold rush. Before miners reached Skagway, Alaska, Mounties ensured that those entering the harsh climate had enough supplies to sustain them. They also provided the area’s only law enforcement.

At noon daily from Tuesday to Friday, the RCMP cadets, their band, and drill staff march to the parade ground for the Sgt. Major’s Parade. Register to attend the parade before 11:45 a.m. at the centre. Your RCMP Heritage Centre ticket includes the parade. Arrive before the parade time to watch the cadets dress their lines in preparation. Hang around afterward to talk with cadets and staff.

Also, you can follow the Mounties’ original path from Winnipeg to Fort MacLeod, Alberta.

4. Everybody Walk The Dinosaur At The Royal Saskatchewan Museum

“Grandmother, what big teeth you have!” exclaimed Little Red Riding Hood as she looked at Megamunch at the Royal Saskatchewan Museum. (Little Red needed glasses.) Megamunch is only a half-size robotic Tyrannosaurus rex next to the museum’s theater. Megamunch is friendly. Scotty, the world’s largest T. rex down the hall, is decidedly unfriendly. Thankfully, he’s only a skeleton. Additional galleries display more fossils, teach about First Nations peoples, and explore Saskatchewan’s geography, geology, and biology.

5. Government House: Life As The 1 Percent

I learned about the class system at the turn of the 20th century at Government House. The experience is fascinating. Back then, guests’ ranks determined guests’ assigned bedrooms. Visiting royals presented a gold faucet for use in the highest-ranking bedroom.

Pro Tip: During the summer, wander through the house’s accessible Edwardian gardens. Early in Regina’s history, gardener George Watt created the gardens. He continued his work across Regina. The Netherlands Liberation Garden is the most poignant of the gardens; the Dutch sent 5,706 tulips in 1984, one for each Canadian soldier buried in the Netherlands during World War II.

6. Wear Green And Root For The Roughriders

Regina is the second-smallest sports market in North America. Only Green Bay, Wisconsin, is smaller. The Green Bay Packers and Saskatchewan Rough Riders are both fan-owned. And like their NFL counterparts, the CFL’s Rider Nation wears green and distinctive food-related headwear. Packer fans don blocks of cheese; Riders wear watermelons on their heads. They outsell all other CFL teams in traditional merchandise, as well.

Pro Tips: Before you head to Mosaic Stadium, read these tips regarding parking, gates, and accessibility. For three hours before kickoff, Confederation Park hosts the Party in the Park.

The Saskatchewan Legislative Building displays the province’s pride. The exterior features elements derived from St. Paul’s Cathedral in London, the Palace of Versailles, and Les Invalides in Paris. The building’s dome is distinctive, as is the cream-colored Tyndall Stone facing from Manitoba. In front, Queen Elizabeth II rides her Saskatchewan horse, Burmese.

The building’s greatest gems are inside. In the rotunda, look for the monumental green marble columns. Their graining looks like the stripes on the outer planets. Also, look for the Confederation Table, around which the delegates negotiated Canada’s Constitution, and the mace, the staff that symbolizes the Legislative Assembly’s authority. The crown on the mace’s top points to the ruling party’s side of the chamber.

8. The Globe Theatre: A Shakespearean Heritage For The 21st Century

Even in the winter, Regina is a city of flowers. Daily from September to June, Regina Floral Conservatory treats guests to its splendor. The displays change six times during the 10-month season.

10. Live Like A Medieval Queen For A Day At Stone Hall Castle

If you want to live like Elizabeth I did, but with all the 21st-century amenities, stay the night at Stone Hall Castle. If you dream of castle life, book a tour.

Legend says the 1912 Regina Cyclone, Saskatchewan’s worst tornado, traumatized Annie Darke. She begged her husband, real estate magnate Francis Darke, to build a home where she would never be in danger again. Francis built her a stone fortress with a bomb shelter in the basement. Hockey player and real-estate developer Jason Michael Hall restored the house and furnished it like a medieval castle.

Regina-style deep dish represents the Roughriders football team. The deep-dish crust is chewy and slightly sweet. It has to be sturdy to support the inch-thick meat-and-cheese topping, including Roughrider-green peppers. Try it at Houston Pizza and Western Pizza, among others.

12. Enjoy Bannocks At The Bannock House

While you’re in the province: 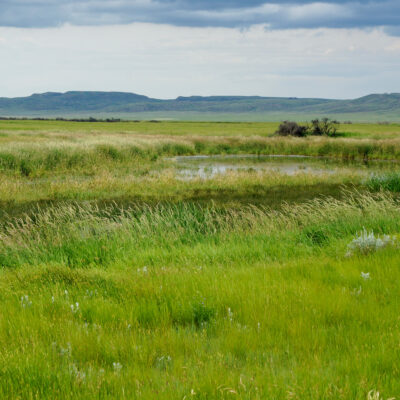 SaskatchewanExplore The Valley Of 1,000 Devils On Canada’s New Scenic Drive 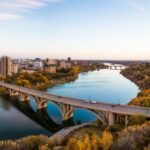