Japan is one of my favorite countries to visit. It is culturally rich and extraordinarily beautiful. I often traveled with my mom. Japan was one of her favorites, too, in part because of the respect and kindness she felt while there.

We had been to Tokyo and Kyoto — both must-sees and absolutely stunning not only during cherry blossom time but also in the autumn. Later, we visited Nagano and Jigokudani snow monkey park — a mile-long walk to the hot springs that my 88-year-old mom nailed.

When it came to visiting Hiroshima, my mom said no thanks. She’d lived through World War II and wasn’t interested in reliving it. I must admit, it wasn’t top on my list either, but it was a must-see for a fellow traveler in our group. I was reluctant to see the pain and to experience the emotions a place like this evokes. But just as Japanese tourists visit Pearl Harbor, seeking an American perspective, Mark and I caught a train in Kyoto and made our way to Hiroshima’s Peace Memorial Park to learn about the day that changed history.

Hiroshima’s Peace Memorial Park is located in what was once a busy commercial district. Only one original building, Genbaku Dome or A-Bomb Dome, still stands. Architect Kenzo Tange designed the park to be a tranquil place for reflection and remembrance with 300 cherry trees, quiet walking paths, and memorials to the bombings’ victims. Seventy-five years later, these seven must-see things in Hiroshima’s Peace Park show visitors the devastation, the lives cut short, and the pain survivors endured — lest we forget.

Taking tram line 2 or 6 from Hiroshima’s main train station and getting off at Genbaku Dome-mae stop, you’ll be at Hiroshima’s Peace Memorial Park’s entrance and steps away from the skeletal remains of this 1915 building and its dome. The building is 530 feet from the hypocenter of the bomb. Before it was bombed on August 6, 1945, the building was a commercial exhibition hall until Japan became embroiled in World War II, and it was taken over for government use. The interior was decimated, as were all of the workers. The damaged brick walls and dome’s steel frame remain and are the only remnants left from the day the bomb was dropped. It was designated a UNESCO World Heritage Site in 1996. It has remained unchanged and is a lasting reminder of the destruction of war and the A-bomb in particular.

The remainder of the peace park is on an island accessed by walking over the Motoyasu-bashi Bridge. On your way to the bridge, you’ll see several monuments, including tributes to the workers who died in the Genbaku Dome and to the Mobilized Students, who supported the war effort. Japan enlisted the service of middle and high school students to build munitions and work in factories. Of the 8,400 middle and high school students in Hiroshima in 1945, 6,300 died during the bombing. This is their monument.

Another monument to children is the first monument you’ll see after crossing the Motoyasu-bashi Bridge. The Children’s Peace Monument pays homage to the young victims of the bombing with a sculpture of Sadako Sasaki holding a metal crane as she stands atop a giant concrete bell. Sasaki folded origami cranes while battling leukemia that resulted from radiation exposure. She hoped to fold 1,000 cranes and be granted a wish. She died at age 12.

Today, display cases overflow with vibrant origami cranes made by children all over the world.

While more subdued than Genbaku Dome and the Children’s Peace Monument, the Peace Bell is full of symbolism. A group of bombing survivors built the bell in 1964 to promote a world without nuclear weapons and war. The bell itself is embossed with a world map without any borders at all.

Where the log strikes the bell, you’ll see the atomic energy symbol. The opposite side has a mirror to reflect the heart of the person striking the bell. The symbolism continues in the surrounding pond that’s filled with lotus plants. Survivors used lotus leaves to ease the pain from their burns.

For photographers, the Peace Bell platform offers a unique view of the Genbaku Dome across the Motoyasu-bashi River.

Called the “Grave of Hiroshima,” the mound, 52 feet in diameter and 11.5 feet high, holds the cremated remains of more than 70,000 people. The vast majority are unidentified. For the 817 of them who were identified, no one ever claimed their remains.

Before the bombing, a Buddhist temple stood where the mound is now. In the days after the bombing, a temporary crematorium — one of many in the city — occupied this spot. On the first anniversary of the bombing, the city remembered the victims and placed their remains in the underground vault. Remains continue to be interred there.

Several memorials occupy the center of the park — the Flame of Peace, the Pond of Peace, and the Cenotaph. Designed in 1952 by Kenzo Tange, the architect who designed the park, the simple concrete and granite arch replicates the shape of an ancient Japanese clay house and protects the souls whose names are recorded in books stored here.

The cenotaph’s arch frames Genbaku Dome in the distance, with the peace flame and pond in the foreground. Its inscription reads, “Let all the souls here rest in peace, for we shall not repeat the evil.”

As of August 6, 2016, victims’ names fill 110 volumes of books. One additional volume simply states, “Many victims with their names unknown.”

The newest of memorials in the park allows for quiet reflection in the Prayer Hall. A gently sloped walkway gives way to the area’s modest fountain surrounded by a 140,000-tile mural of Hiroshima’s cityscape with one tile for each victim of the bombing — whether they died immediately or later as a result of their injuries or the effects of radiation.

The Memorial Hall also displays victims’ names and photographs in the Victims’ Information Area. Exhibits include video testimonies from victims and excerpts from their memoirs read in both Japanese and English.

The museum is thought-provoking, sobering, heartbreaking, but an absolute must-see. Everything that led up to the bombing and its aftermath is portrayed here. The unbiased displays run the gamut from photographs of the devastation to a charred lunch box and tricycle. With a focus on education and not repeating the mistakes of the past, exhibit placards are in Japanese and English.

Take a few moments to listen to first-person accounts of the bombing that immediately killed 80,000 of Hiroshima’s residents and injured 35,000. These videos are particularly powerful.

Like the rest of the park, the museum is ADA accessible. While public parking isn’t available in the park, a parking lot for visitors with accessibility issues is located near the museum. For more information and for assistance during your visit, review the museum’s website.

If your time to visit the park is limited, make the museum a priority. Allow about 2 hours for your visit to the museum and a half-day for the entire park to see the other monuments and the Memorial Hall. Walking from place to place is easy, with places to sit along the way.

For the rest of your day, I recommend a trip to Miyajima or Shrine Island to see Itsukushima Shrine and its iconic torii gate. It’s easiest to reach the island via a 45-minute boat ride from the peace park. Along with the massive poppy-colored gate that “floats” in the Sea of Japan at high tide, this tiny island is packed with temples, shrines, and bold deer that eat out of your hand. All will help lift your heavy heart. 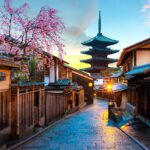 Japan8 Japanese Cultural Customs To Know About Before You Go