The Best Port Tours And Tastings To Experience In Porto, Portugal

Port, which is considered the national wine of Portugal, has a distinct and sweet taste and is usually served as a dessert wine. However, there are dryer and more sophisticated vintages served with meals. Port is short for the city of Porto, which is where the name came from because it’s located at the mouth of the Douro River, which runs the length of the Douro Valley, where the grapes are grown. Winemaking was established in Portugal by the Romans, who ruled Portugal for roughly 500 years, starting in the second century, but port was not officially registered until the mid-1600s. The Douro Valley, which is about 60 miles from Porto, is where the grapes for port wine are grown, and although there are over 100 varieties, only five are widely used in producing port wine, with the Touriga grape being the most desirable.

Port tastings and tours have become a popular attraction in Porto in recent years, and we have compiled a list of the top ones.

The rich history of Ramos Pinto and its illustrious founder is as much a part of the Ramos brand as the port they produce. In 1870, at the brash age of just 21, Adriano Ramos Pinto started his wine company but mainly exported the wines to Brazil. He then enlisted his brother to help successfully sell their wine in their native Portugal. Pinto had a flair for marketing, using methods which weren’t used till 100 years later, such as illustrated posters to advertise their products.

Ramos Pinto today is one of the more prestigious brands of port. They have two facilities for tours and tastings. The Porto location combines a museum, the former 19th-century offices, and storage facilities in a pleasant, 40-minute tour along with artifacts, furniture, and a series of original 19th- and 20th-century posters. At the end of the tour, you are offered a tasting of a red and a white port in their comfortable lobby lounge area.

The other Ramos Pinto facility you can visit is in the town of Vila Nova de Foz Coa, in the Douro Valley, about 2.5 hours from Port. You can visit the Vale do Coa Archaeological Park, a UNESCO World Heritage site, or the Sitio de Ervamoira Museum, separately or you can combine both with lunch and port tastings.

Pro Tip: Reservations must be made in advance on their website for the tours.

Calem is a fourth-generation, family-owned winery and was founded in 1859 by Antonio Alves Calem. After successfully marketing his port and fine wines to Brazil, he was able to export his products all over the world by owning his own fleet of ships.

There are four different wine tours available at the Calem site, located just outside Porto in Vila Nova de Gaia. The Tour and Taste option offers a comprehensive history about making port on a guided tour, an interactive museum, and a port tasting for14 euros. The second tour features a wine tasting and live Fado music for 21 euros, the third tour includes a wine tasting and 5D film about port making, and the fourth tour is a food tasting of either chocolate or chocolate and cheese, along with matching wines.

John Graham came from five generations of British port makers based in Porto. Even though John’s father sold the family business in 1971, John still had a passion for port and diligently learned his craft by studying with port master John Smithe of Cockburn Smithe’s. After his studies, Graham decided to strike out on his own by starting his own company rather than working for the classic port houses. He opened his company, Churchill’s, in 1981 at the age of 29, striving to create a drier and more sophisticated port using the old methods he learned. The company was named after his wife Caroline Churchill. The cherry on the cake of the growth of Churchill’s is when Graham purchased a 125-acre vineyard and was able to produce his wine from start to finish.

The handsome lodge in Vila Nova de Gaia provides tours and tastings from Monday to Saturday. The tour includes information about the making and aging process of port, the Douro Valley, where the grapes are grown, and a tasting in their contemporary tasting room overlooking the scenic Douro River.

The 1982 bar is an outdoor space with picnic tables, and you can purchase a pre-packaged picnic lunch of local meats, cheeses, and produce, along with wine for 40 euros. It also offers port cocktails and charcuterie and cheese boards.

Churchill’s also sponsors events such as conversations with winemakers.

Pro Tip: Reservations must be made in advance online.

Espaco Porto Cruz is a three-story multi-functional space dedicated to the art of port wine. On the first floor, you can take a 360-simulated-degree journey with a VR viewer that takes you from the Douro Valley vineyards to the manufacturing plants in Vila Nova de Gaia. Also, on the first floor is a bar that serves gelato and crepes with port flavoring. The second floor contains a tasting room with a comfortable conference-style room with a long table and swivel chairs. The third floor has an indoor and outdoor terrace restaurant serving tapas paired with port and other Douro Valley wines. The facility also has an auditorium for 30 people for private or corporate events. Their long list of port wines includes the ruby, white, pink, and tawny, aged either 10 or 20 years.

You can also make a reservation to visit the super high-tech plant, one of the most advanced in Portugal, to experience the process of port winemaking.

Porto Cruz has a hotel, the Gran Cruz House, in the center of the historic district of Porto in a 16th-century building. Each room is named after a port vintage which includes a bottle of the said port at check-in.

Ferreira and Sandeman Cellars has three locations for port wine experiences, two in Porto and one in the Douro Valley.

Ferreira is a premiere vintage wine cellar, one of the oldest and finest in Portugal, dating back from 1896, when the owner Dona Antonia Adelaide Ferreira passed away and left behind her remarkable collection of port. The collection features stellar vintages from 1815, 1820, 1834, and 1847. There’s a wide range of tasting packages, including a 90-minute tasting of four vintage ports for 42 euros per person, in a room beautifully decorated with traditional Portuguese blue and white ceramic tiles, a guided tour of the cellars with a tasting of three wines for 17 euros per person, and the top of the line experience, a 2-hour cellar visit along with a tasting of four vintages of port from 2015, 2016, 2017, and 2018 for 250 euros.

Since 1790, Sandeman Cellars has been a celebrated Portuguese winemaker in Porto and was started by Scotsman George Sandeman.

Today, Sandeman Hall is open to the public for free to discover the brand’s fascinating history and its founder through displays of artifacts, photos, paintings, and other objects. The items have been passed down from the various generations of the family. There’s also a number of interactive touch screen displays. A collection of antique bottles with dozens of rare bottle designs from the 17th century to the early 20th century is also part of the Sandeman Hall. You can also do tastings at Sandeman’s, which offers five experiences, including a cellar visit with either two, three, or four tastings, plus a 90-minute old Tawnies visit, which includes the history of how port is processed and developed, along with four tastings of tawny port.

The Quinta Do Seixo is a sprawling 250-acre vineyard with vines over 100 years old in the Douro Valley, which you can stroll through, and afterward, enjoy a glass of their special Sandeman port. The site also has a state-of-the-art and innovative winemaking plant. The plant’s design is laid out on a series of hillside grass terraces that are fully integrated into the landscape. Next to the plant is the original chapel and house from the 18th century with panoramic views of the Douro Valley.

Other options at Quinta Do Seixo include a picnic lunch in the vineyard with a bottle of wine, a tasting of four tawny ports, a 90-minute tour of the factory with five wine tastings, and a 50-minute tour with three wine tastings.

House of Sandeman Suites and Hostel is a luxury hotel with views of the Douro River.

Pro Tip: All of Porto’s port and wine locations are technically in Vila Nova de Gaia, which is about a 15-minute walk across the Dom Luis I bridge from Porto. 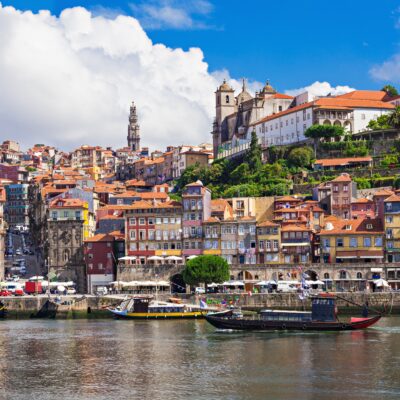 PortoHow To Spend A Day In Porto, Portugal 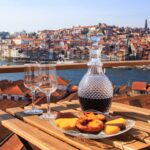 PortoWine Tasting In Porto: 11 Things To Know Before You Go 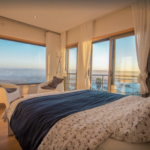 Portugal10 Oceanfront Villas In Portugal That Cost Less Than A Hotel