Nestled in the heart of the Ozark Mountains of Northwest Arkansas is historic Eureka Springs. Situated near the Tennessee state line, the town lies about three and a half hours northwest of Little Rock.

Here, you can find all of the small-town charms you might expect from a city with just 2,397 residents: Victorian shops and homes, plenty of hiking and nature opportunities, treehouses, and the entire downtown area listed on the National Register of Historic Places. What you might not expect are award-winning dining, arts, and entertainment venues on par with much larger cities.

Things To Do In Eureka Springs

In addition to blocks of distinctive boutiques, you’ll find numerous art galleries in this artist’s retreat. Artists work in their Eureka Springs studios and sell their pieces to the public.

Stroll along Main Street in downtown Eureka Springs to discover the variety of shops, take a carriage ride, or take a downtown walking tour such as the Underground Eureka Walking Tour for a tour that feels like you have a backstage pass. Then walk along the award-winning Spring Street to visit more boutiques, art galleries, and dining.

One way to dive into the local lore and architecture is with a Tram Tour. Hop on the tram for a 90-minute ride during which local guides narrate the journey. Discover the heart of Eureka Springs’ downtown area, its Victorian homes, the Crescent Hotel, plus one of several springs after which the town is named, the Grotto Spring. Tours depart at 1 p.m. and 3 p.m. from the Park and Ride/Visitors Center.

Enjoy hiking, fishing, and bird-watching at Lake Leatherwood City Park. With 1,610 acres including an 85-acre spring-fed lake, the cool springs and 25 miles of trails offer a chance to spend time outdoors while exploring historic stone walls and bridges, plus unusual rock formations. With more than 120 different bird species — including heron, bald eagles, and wild turkey — bird watchers have a chance to see wildlife in its home.

To visit these and other natural springs, follow Eureka Springs’ Natural Springs Trail.

Intrigue Theater is located inside a 100-plus-year-old building on the historic loop, and it’s where a illusionist Sean-Paul and medium Juliana Fay amaze visitors in an intimate setting. The two “perform a Vaudeville Era show that is unmatched in the country,” their website boasts.

Some favorite festivals include the Ozark Folk Festival, the Banjo Rally International (since 1975), a Madhatter Ball, and Oktoberfest. The city also hosts several parades throughout the year, including Mardi Gras, St. Patrick’s Day, and Christmas parades.

Or take in The Great Passion Play, an outdoor theater production. The outdoor amphitheater hosts the drama of Jesus Christ’s last days on earth. Before the play, see the Christ of the Ozarks Statue, take the Holy Land Tour, and see a section of the Berlin Wall. You can check out the Church in the Grove, the Bible Museum, the History Museum, Noah’s Ark Park Petting Zoo, and the Sacred Arts Museum. Plus, the hiking and mountain bike trails are open year-round.

Opened in 1886, this historic hotel is supposedly haunted and has been featured on Ghost Hunters and other paranormal shows. Take one of the nightly ghost tours to learn the stories behind the ghost sightings.

Pro Tip: You don’t have to stay at The 1886 Crescent Hotel to take a ghost tour. Tours are offered nightly at what’s called America’s Most Haunted Hotel and begin at 8 p.m. Hear ghost stories that have been reported, tour the most active areas, and end at the morgue, where many sightings have taken place.

Looking for a ghost-free place to sleep? Eureka Springs boasts many beautiful bed and breakfasts.

Dubbed “The Ozark`s Strangest Dwelling,” Quigley’s Castle is covered with creek rock. This unique abode is the brainchild of one Elise Quigley, who had her five children help tear down their lumber shack so her husband would build her this dream home. That’s one approach!

It is also home to a perennial garden that features over 400 varieties of flowers. Located four miles south of Eureka Springs, Quigley’s Castle is open April through October, from 10 a.m. to 4:30 p.m. (closed Sundays and Thursdays).

No matter your craving, Eureka Springs has everything, from Southern food to fine dining and ethnic cuisines such as award-winning Czech-German dishes, authentic Italian cuisine, and spicy Indian fare.

Bavarian Inn Restaurant is one of the most award-winning restaurants in Northwest Arkansas and features traditional Czech-German foods. Favorites include the Bavarian Plate — a large home-style bratwurst, slices of smoked pork, and sauerkraut, served with potato salad; the Goulash Esterhazie — chunks of beef simmered in a rich brown sauce and seasoned with Hungarian paprika; and the Apple Strudel — a paper-thin crust wrapped around warm apples; and the German Chocolate Cake. The Sauerkraut Soup is so popular they make it fresh each day.

Or dine in the dining car of a 1940s-era train as it travels through the countryside. Take the Eureka Springs and North Arkansas Railway dinner train and spend about two hours traveling four-and-a-half miles while dining. For under $50, you’ll choose from a chicken breast baked in a white cream sauce, prime rib, a trout almondine, chicken primavera, or vegetarian primavera. All of the entrees are accompanied by soup and salad, rolls, rice pilaf, mixed vegetables with hollandaise, and a Flaming Baked Alaska. Wine and champagne are available to purchase. The price includes train fare and your meal. Or take the lunch train for under $30 or an excursion train without a meal for under $20. 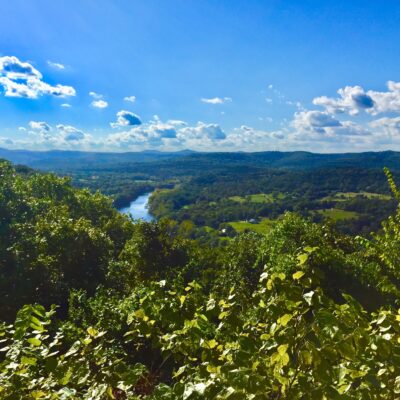 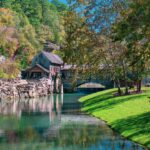