The Best Things To Do In Toledo, Spain: Where To Stay, Eat, And Play

Known as the City of the Three Cultures, Toledo has been declared a UNESCO World Heritage Site because of its extensive and well-preserved heritage. Located on a mountain surrounded on three sides by the River Tagus, Toledo has a very long history that included Roman, Arab, and Christian reigns, with Jews playing a great part in Toledo’s history, too.

This diversity is reflected in the many impressive monuments you must visit. But there are more reasons to make the short trip (one hour by car and less than 30 minutes by high-speed train from Madrid). In Toledo, you can enjoy delicious Castilla-La Mancha food and visit the museum of one of Spain’s most famous painters, El Greco.

If you have the time, stay overnight so you can go on a nocturnal tour and see everything illuminated like a movie set.

Things To Do In Toledo, Spain

The list of things to do in Toledo is a long one. It ranges from visiting the most important monuments to strolling along Calle Ancha, observing as artisans make famous Toledo steel objects to sampling the best food in the Agustin market, zip-lining across the River Tagus to a nocturnal tour revealing hidden treasures.

Whether you arrive by train or car, you will be at the bottom of the mountain. Well indicated by signs, there’s a path to an escalator that takes you up close to Puerta Bisagra, the main entrance to the historical city. Originally built under Arab rule, the huge gate was reconstructed in the 16th century. Some of the original features can still be seen in the inner arch. The entrance is formed by an arch of triumph flanked by two semi-circular towers with the city’s coat of arms on top. There are several more entrances, including Puerta del Sol and Puerta del Alcantara, which you will come across whilst exploring the city on foot.

Familiarize Yourself With Zocodover Square

Zocodover Square is the main hub of Toledo, and you will cross it often as you head to the various sites you wish to visit. But first, enjoy the square and its history. The name derives from the Arabic, and during Muslim rule, it was the site of a cattle market. During the Middle Ages, fruits and vegetables were sold here, but the square was also the site of bullfights, fiestas, and, more morbid, public executions and auto-da-fe, the judgment ceremonies conducted during the Inquisition.

It’s ringed by arcades with many small shops and cafes and is the meeting place for guided tours (most prominently Free Tour’s groups, led by guides with yellow umbrellas), which is good to know if you prefer to explore that way. Remember well where the square is, and you won’t get lost in Toledo.

Enjoy The View From The Alcazar

The massive castle and fortress on top of the mountain is, in fact, the first sight that greets you when arriving in Toledo. A Roman palace constructed in the third century, it was restored as a royal residence by King Charles I in 1535. The Alcazar fortress also played an important role in more recent history during the Spanish Civil War. Today it houses the regional library and an army museum. Most eye-catching, however, are the unimpeded views over the city, the river, and the bridges.

The Alcazar is an easy walk up from Zocodover.

Watch The Artisans In Calle Ancha

Sword making was a major Toledo industry, known in the area since 500 B.C. The particularly hard steel came to the attention of the Romans when used by Hannibal during the Punic Wars and became the weapon of choice for the legionnaires. This continued until firearms replaced the use of swords, but the craft has survived. Today, although decorative knives and swords are still made, the main products in black and gold are plates, vases, and jewelry. The artisans sit in the windows of their family-owned shops and galleries and you can watch to see how these beautiful objects are forged.

Zip Across The River On La Tirolina

For the more adventurous among you, this is a fun, and quite safe, activity. La Tirolina is Europe’s longest urban zip line. Starting at the medieval San Martin’s Bridge, you “fly” over the River Tagus, enjoying amazing views of river and city. It’s 30 minutes of fun with all the necessary equipment and insurance provided.

The Primate Cathedral of Saint Mary, easily reached from Zocodover, will leave you in awe. The massive 13th-century cathedral was built in the High Gothic style, influenced by the French architecture of the times and adapted to Spanish taste. You are in danger of getting a stiff neck glancing up at the many portals of the exterior and even more distinct chapels inside, not to mention the fabulous ceiling fresco by Luca Giordano. Elements of the Mudejar style, an Arab architectural influence found mostly in the south of Spain, are also present.

La Juderia is the ancient Jewish quarter of Toledo. For centuries, Jews, Christians, and Muslims coexisted in Toledo and thus contributed to a very diverse culture. Until Jews were expulsed from Spain in the 15th-century, they were a prosperous and highly respected community.

Toledo’s Jewish quarter, which you enter via Calle San Juan de Dios, shows you how and where they lived and is also home to the Synagogue of Santa Maria La Blanca and the only surviving Islamic bath, Banos del Angel. The synagogue, which became a church in the 15th century, was built in 1180 on Christian territory by Muslim architects for the Jewish community. It’s a prime example of why Toledo is called the City of Three Cultures.

Cross Over The Roman Bridge

Not all that many marks of Roman times remain in Toledo, so you might want to walk across the Roman bridge, also known as Puente de Alcantara, which goes over the River Tagus. If you wish, you can combine this with a walk over San Martin’s Bridge, which you will already be familiar with if you “flew” the Tirolina. You have gotten an overview from the air, now you can enjoy a totally different perspective of the bridges from ground level.

El Greco, born Domenikos Theotokopoulos, was a painter and sculptor born in Crete/Greece in 1541. After years in Italy, he moved to Spain in 1577 and became one of the most important Renaissance artists in the country. He died in Toledo in 1614.

The El Greco Museum is located in the Jewish quarter, so it’s a good idea to walk on from there to visit the museum. Opened in 1911, it consists of a 16th-century building, supposedly El Greco’s original home in Toledo, and a 20th-century extension. The two are connected by a courtyard and surrounded by beautiful gardens. Many works of the artist are displayed in the museum, although his most important ones are in the Prado Museum in Madrid.

In 2016, Toledo was dubbed the culinary capital of Spain. That gives you an idea of what delicious food to expect. The cuisine of Castilla-La Mancha, the region in which Toledo is situated, is meat and vegetable-based. Specialties of Toledo are stewed partridge, lamb and pork stews, trout (fresh from the River Tagus), and marzipan!

One of Toledo’s best sit-down restaurants is Adolfo. Located near the cathedral in a beautiful 12th-century Jewish house, you’ll find all the Toledo specialties, including partridge and suckling pig.

Great fun is the unassuming Patata y Ole. As the name indicates, the potato is predominant on the menu.

And now for the sweet tooth: marzipan. The most iconic piece is a marzipan cake decorated with an eel, reminiscent of the times when eels lived in abundance in the river. Santo Tome right on Zocodover Square is the place to sample (and buy) the sweet temptations.

Best Places To Shop In Toledo

Shopping is a pleasure in Toledo, and what you should concentrate on are metal smithed objects and food. There’s marzipan, as mentioned above, but also Manchego cheeses, wine, herbs and spices, olive oil with garlic, ham, and even truffles.

Combine a shopping spree with a visit to the beautiful San Agustin market. Close to Zocodover, the market is actually an open-plan, five-story building with open stairways. You’ll find stalls and restaurants, a roof terrace, every kind of gourmet food, and a fabulous vertical garden that will make you think you are actually in a park rather than in the middle of the historic town.

Best Places To Stay In Toledo

We have mentioned that you might want to spend the night so you can enjoy a spectacular night tour and see all of Toledo’s historic sites illuminated. The tour takes you underground, too.

The city’s oldest (and one of its most luxurious) hotels is Carlos V near the Alcazar. It’s within walking distance of nearly all the major sites. The building itself is steeped in history, and many a celebrity has crossed its marble thresh hold.

For a more affordable option, check into La Posada de Zocodover. See? You can’t get away Zocodover Square. This nice, family-run hostel stands between the square and the cathedral.

We strongly advise that if you drive up to Toledo, you leave your car at the bottom at the parking lot near the railway station or the central bus station, which is only a mile away. Driving in Toledo is a hazard because of the many one-way streets, which are narrow and have many blind angles. As a taxi driver told me: “You have to be born in Toledo to be able to drive here,” and if you look closely, you’ll see hardly a car without a few dents and plenty of scratches. Don comfy shoes, ride up the escalator, and enjoy on foot. 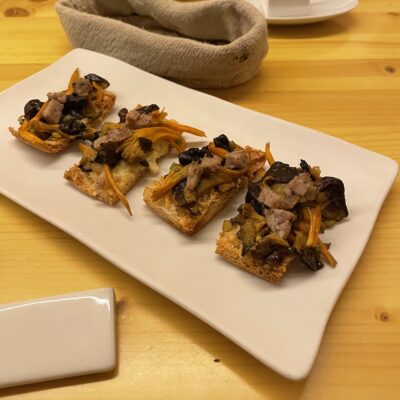