There’s a reason why Castellfollit de la Roca is one of the most photographed towns in Spain. The town, which is more than 1,000 years old, appears to be perched precariously on the edge of a 164-foot-high cliff. What’s more, the basalt cliff’s edge is very narrow, so the town’s houses stretch along the edge of the cliff in a long line.

Castellfollit de la Roca is a municipality in the La Garrocha region, in the province of Girona. It is part of the judicial district of the neighboring town of Olot.

As is usually the case when towns are set in breathtaking spots, the location is a result of unique geologic activity. In this case, the cliff’s formation is due to lava flow — or more accurately, two overlapping lava flows.

Castellfollit de la Roca, with a population of 961, has narrow streets that “still carry the characteristics of its medieval origin, and the city center features ramparts that fortified the town during the civil war,” Atlas Obscura explains.

“Many houses and streets in the city center are also built of the dark, volcanic rock that serves as a pedestal for the town,” the article continues. “The main street of Castellfollit winds through the entire town, narrowly pressed between houses on both sides, straining to remain on the cliff face.”

Adding to the town’s beauty are two rivers — Fluvià and Toronell — one on each side of the cliff. As if that isn’t enough, the city is known for its beautiful sunsets, as the sun’s rays illuminate the rocky cliff.

Once at Castellfollit de la Roca, there are two landmarks that simply must be seen in person.

The first is the San Salvador church, which is located at one end of the cliff. First built in the 13th century, the church has a square bell tower and has openings on each side. The bell tower is crowned by a dome decorated with small pilasters. It still preserves several reused basalt ashlars and a late Romanesque window, Fascinating Spain explains.

Currently, the U.S. Embassy explains that due to COVID-19 Spanish travel restrictions, U.S. citizens cannot enter Spain unless they meet very specific requirements or have already obtained special permission from the Government of Spain. However, Spain’s Prime Minister Pedro Sanchez recently announced that travelers from anywhere in the world who are vaccinated against COVID-19 will be able to enter the country beginning June 7.

Editor’s Note: Nearby Girona is a much-loved destination. Read about it in 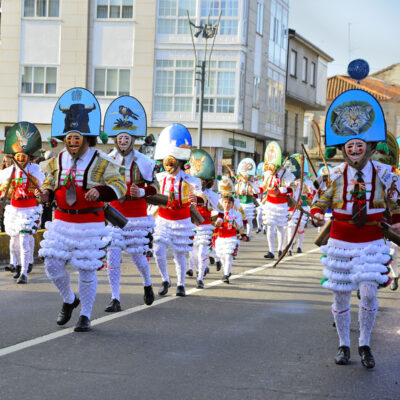 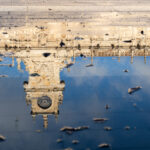 Spain9 Gorgeous Luxury State-Owned Hotels To Stay At In Spain 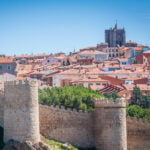