The Best Things To Do In Seaside, Oregon: Where To Stay, Eat, And Play

There was a year when we wanted a vacation from our months of full-time RVing. We also wanted to make our wedding anniversary more special than usual that year. As we were coming down from Vancouver, we chose the romantic town of Seaside, Oregon, for a special stop. It is complete with beach fun, awesome scenery, fantastic shopping, and amazing history.

There were two days of drizzles, three days of partly cloudy weather, seven days of strong winds, and two days of sun. And it was all worth it. It was not surprising. Having lived in Seattle for three years, we were familiar with this kind of weather. It’s part and parcel of life in the Pacific Northwest. No matter the weather or how long you have, here is our advice on where to stay, eat, and play in Seaside.

Things To Do In Seaside

Seaside is known as the Jewel of the Oregon Coast. A town in Clatsop County, it has a population of well under 7,000. But it is in the middle of a historically important area: the last stop of the two-and-a-half-year, 8,000-mile Lewis and Clark expedition that led to the doubling of the size of the U.S. Blessed with a romantic name that comes from Seaside House, a historic summer resort built in the 1870s by railroad magnate Ben Holladay, the town is not only historical, but there is also an outstanding beach, lots of shopping, and many beautiful spots to spend hours with your camera in tow.

It was tremendous luck that the American Kite Fliers’ Association’s 39th Annual Kite Festival was going on during our stay. The competing kites were quite a sight as we luxuriated in the hot tubs beside the pool at the WorldMark Seaside. The beach and sky were a wide canvas littered with the giant colorful beings that danced to the hum of the ocean and the songs of the winds.

Even if you don’t make it there during a kite festival, you can enjoy the beauty of Seaside Beach, and, because there are always such good winds, you could even try flying your own giant kite. The beach area is so wide and expansive that there are always people milling around, playing volleyball, biking, or skating in addition to flying kites.

The best feature of the beach is the grand Seaside Promenade. There are always many strollers walking along this special place. At the end of the Promenade is the Seaside Turnaround, a small pedestrian and vehicular rotunda that reaches out to the shoreline and marks the actual spot of the historic end of the Lewis and Clark Trail. Their statue, together with the iconic Seaside, Oregon, sign, aptly stands in the middle. We were lucky that friendly strollers were glad to take our souvenir photo.

Fort Clatsop National Memorial is about a 20-minute drive outside of town. This is where Lewis and Clark were encamped in the winter of 1805 and 1806. This memorial was later grouped with the other spots the duo explored around the vicinity, and the whole area was preserved as Lewis and Clark National Historical Park. History will be recreated for you as you meet Sacagawea and wander through historical replicas of the last stop of the famous explorers’ historic expedition.

Just 10 minutes north of the park is Fort Stevens. It was built near the end of the American Civil War. It had such great infrastructure that it continued to be of very good use as an active military reservation, protecting the harbor all the way up to WWII. But it was the sailing ship Peter Iredale that ran aground at its beachhead in 1906 that has drawn tourists to the area. The Iredale wreck proved to be a great photo opportunity for me.

This is a lovely promontory that’s defined by a steep rocky bluff jutting out into the ocean at approximately 1,200 feet high. It was named after the Tillamook, a Salishan-speaking tribe of Native Americans who inhabited the coast around the area in the 19th century.

In 1806, Clark led a team that traveled south from Fort Clatsop to harvest blubber from a beached whale in the area. Today, the area is called Ecola (the Salish word for big fish) State Park.

Back in town, you can visit this privately owned aquarium. It was an indoor saltwater public bath in the 1920s. Water was pumped from the Pacific Ocean through a still-visible pipe. In 1937, it became an aquarium, meaning it is one of the oldest in the U.S. In fact, it was the first to breed harbor seals in captivity. An even more interesting fact is that during the 2011 earthquake and tsunami in Japan, a boat drifted from across the Pacific and washed up on the shores carrying trapped live fish. The remaining of these so-called tsunami fish are still on display in the aquarium.

This small museum will take you back thousands of years through its many exhibits. If you allow at least an hour for an overview, then you can have the chance to go through the Native American, logging, historic hotels, old Pacific pier, Turnaround Building, Broadway Billiards, railroad history, and Hall of Fame exhibits.

The most important thing we had to decide was where we were going to dine to celebrate our anniversary. We went around town to scout for the special place. We tried Osprey’s Cafe, Maggie’s on the Prom, and Sam’s Seaside Cafe. The food was good at all these establishments.

But we were ecstatic when we found the place: Mo’s Seafood and Chowder on the ground floor of Shilo Inn Seaside Oceanfront. It had the ambiance we were looking for with huge picture windows for scenic dining by the sea.

Shopping is one of the activities I loved in Seaside. We started at the Seaside Carousel Mall in downtown Seaside. It was built in 1985 on the site of the old Bungalow Dance Hall. This hall was built in 1920 for the big-time bands of the era. It ran for 20 years, and greats like Bing Crosby and Glenn Miller performed there. Locals say that Seaside was the place to be during those days.

Today, the mall is full of crafts, local products, and food outlets aside from fun things to do like riding the Old Carousel that is right in the middle of the quaint mall. It is open from 9 a.m. to 9 p.m. My husband thinks riding a carousel is one of the most romantic things in the world so, of course, we had to take a spin.

But it was at the Seaside Outlets where I found a lot of treasured items. Featuring outlets for 22 name brands, it was at an Eddie Bauer store that I found a light black jacket on sale at a 70 percent discount. It has become a favorite of mine and is still in good use today. What surprised me most, however, was the multi-station recharging area near the mall. It was the first time I saw such a thing for Tesla vehicles.

We had enough Club Wyndham timeshare points to stay in a spacious one-bedroom unit at the four-star WorldMark Seaside resort. Also available for booking by the public, it is recognized as one of the state’s best waterfront locations. It was a great choice and became a wonderful home not on wheels for a full week.

There is a large pool area that looks outside to the beach. It is surrounded by several hot tubs where we spent many hours of relaxation. We also frequented the game room, where we enjoyed playing table tennis. The fitness center saw us every day for our exercise regimen. At the end of the day, however, we thoroughly treasured our drinks and appetizers on our balcony. It offered such a great view of the town, the nearby hills, the beach, and the ocean. Since our unit was equipped with a kitchen, we bought a lot of seafood and other supplies at the grocery store and prepared most of our breakfasts and dinners.

Locals will tell you that taking some half-day and day-long trips to nearby areas will afford you even more connections to the area’s history, plus fantastic scenery. The historic city of Astoria with its Historic Column and so-called bridge to nowhere is just 20 minutes to the north of Fort Stevens. And the scenic town of Cannon Beach with Haystack and the Needles is just 15 minutes to the south of Tillamook Head.

Our week in Seaside was such a welcome break from all our months of RVing. Our anniversary that year became a special celebration. We had everything from history and scenery to shopping and beaches. The weather may not have been perfect, but you don’t need that in Seaside. There is something for every kind of day. It was a luxurious treat we deserved to have. 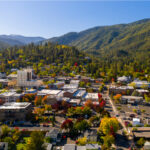 OregonHow To Have A Glorious Weekend In Beautiful Ashland, Oregon