Why You Should Make Time For Astoria, Oregon

No doubt about it: Seattle and Portland both have their own terrific scenes and individual highlights. They’re two of our favorite Pacific Northwest destinations! But there is a small coastal town — it’s tucked into the gorgeous inlet where the Columbia River meets the Pacific Ocean — that’s also worth your attention.

Astoria, Oregon, is an easy trip from both Seattle and Portland, and it’s a great place to spend some of your vacation time. Here’s an introduction to this seaside charmer, and a few reasons why you should check it out the next time your travels take you to the Pacific Northwest.

Astoria is the seat of Clatsop County, Oregon. The town developed just to the north of the fort that served as the winter encampment for the explorers Meriwether Lewis and William Clark. Fort Clatsop was the final stop of their massive expedition across the country, and the men stayed there from December 1805 until March 1806. Today, the fort is a national historical park that provides a fascinating look at the explorers’ experience and what they encountered on the Oregon coast that fateful winter.

Astoria became central to the fur trade in the early 1800s and was settled jointly by the Americans and the British until 1846, when the Oregon Treaty saw Britain cede its rights.

The town also developed into a key port. Two fires, the most recent in 1922, devastated the downtown area. The brick buildings you’ll see in the perfectly gridded downtown district date to that period.

To take a deeper dive into the history of this special place, consider a visit to the Flavel House Museum. This ornate Victorian home once belonged to Captain George Flavel, who was a riverboat pilot. The captain’s granddaughter left the property to the city, and it’s since become a museum that shows firsthand what life was like in Astoria during the late 1800s.

Chances are you’ve been to a few beaches during your travels, but Astoria’s are some of the most stunning and spectacular we’ve ever seen.

Just to the south of town is rugged Cannon Beach, with its massive Haystack Rock rising from the waters offshore. The area is part of the Oregon Islands National Wildlife Refuge, and the Haystack serves as a home to many different birds, including tufted puffins, gulls, and cormorants. At low tide, visitors strolling the beach should take care to avoid the starfish, sea urchins, and other creatures that collect in the tidepools.

Even the National Geographic agrees that Cannon Beach is a standout — in 2017, it named the area one of the best beaches in the world. Sunrise and twilight are both magical times to be on Cannon Beach. Do not miss this one-of-a-kind spot — just be kind to the wildlife and stick to the sand.

If you’re interested in hiking and some amazing Pacific views, head to Ecola State Park, right next door to Cannon Beach. The park stretches along 9 miles of stunning coastline, and it’s a perfect picnic spot.

With its incredible, picturesque seascape and Victorian homes on the surrounding bluffs, it’s no surprise that Astoria has been the backdrop for several big-budget Hollywood movies.

The most famous of these, of course, is the teen pirate adventure The Goonies. Steven Spielberg served as executive producer for the film, which has become a cult favorite for folks who grew up in the ’80s. Driving through town, you’ll feel like you’ve arrived on the set! Although the home where the fictional brothers Mikey and Brand Walsh lived is still there, it’s now privately owned, and sadly, tourists cannot access it. That doesn’t stop Goonies fans from getting as close as they can for a selfie, however!

Kindergarten Cop, starring Arnold Schwarzenegger as an undercover police officer masquerading as a teacher; Free Willy, the story of a boy who befriends and later frees an orca from a water park; and the horror classic The Ring were also shot in Astoria. This town has quite the silver-screen legacy!

Astoria is blessed with a temperate climate that supports a variety of fresh produce most of the year. Pair that with the freshest possible catches from both the Columbia River and the nearby Pacific Ocean, and you’ve got the ingredients for a foodie’s paradise.

After crossing the Lewis and Clark Bridge from Seattle, we spied signs for the Berry Patch Restaurant in Westport, Oregon, and made the snap decision to start our day with dessert. The café is located about 30 miles east of Astoria, and it was the perfect place to pull over for a delicious snack! True to its name, the Berry Patch offers a vast assortment of from-scratch, amazing pies featuring berries we’d never even heard of. Our favorite was the tayberry, a cross between a raspberry and a blackberry.

In Astoria, after we wrapped up our sightseeing, we headed to the Buoy Beer Company, a craft brewery and gastropub located in a former cannery overlooking the Columbia River. We really enjoyed the locally fished sturgeon, a firm whitefish that tastes sweet, almost like lobster.

The Bridgewater Bistro is also a great dining spot. It features New American, locally sourced cuisine and an incredible view of the Astoria-Megler Bridge, the longest continuous truss bridge in North America.

After exploring the town, walking around a bit, and taking in the sights, it begins to dawn on you: Astoria has a special feel. You pick up on the fact that this is a tight-knit community. The number of people who live here has remained fairly constant, while other cities in the Pacific Northwest have seen population booms. While we felt welcomed by everyone we encountered (and it was pretty clear we were tourists!), we also appreciated Astoria’s sense of place, pride, and peace. This is a town that knows itself — where it’s been, what it is now, and where it will be going — and that was neat to experience.

While the idea of treasure-hunting in Astoria might conjure up visions of a pirate’s fortune (thanks to the Goonies), there are plenty of fabulous real-life finds in town. Within downtown, there are many great boutiques and art galleries featuring colorful blown glass, pottery, and paintings. RiverSea Gallery was one of our favorite stops, with its well-curated collection of contemporary art crafted by regional artists. We also happened upon several well-stocked antique stores, with interesting items and one-of-a-kind finds.

Be sure to make the short — but steep and winding — drive to experience the incredible, sweeping views from the historic Astoria Column. The column, which was constructed in 1926, is 125 feet high. If you’re not claustrophobic — or afraid of heights — we recommend that you climb the spiral staircase to the top. Once you’re up there, you’ll be rewarded with amazing, panoramic views of the Columbia River, the surrounding forests, and the city below. You’ll also be able to see the shimmering Pacific Ocean in the distance.

It costs $5 to park near the Column, but it’s free to climb to the top. Consider stopping at the small gift shop first, and pay $1 to take part in a charming generations-old Astoria tradition. You’ll receive a small balsa-wood glider that you can launch from the top of the Column. Make a wish as you watch it swoop to the ground below.

Planning a trip to Portland and interested in traveling off the beaten path? We’ve got you covered: Just stop by these 10 cool places to visit in the city. If you want to experience the natural wonders the area has to offer, a visit to the nearby Multnomah Falls is a must.

If you’re visiting Seattle instead, check out these five delicious and affordable restaurants and these six quirky things to do. 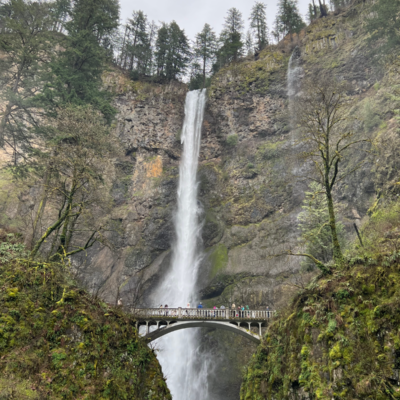 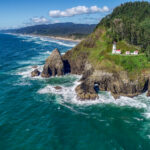 OregonTaking The Scenic Route Through Oregon From Portland To Corvallis: My 6 Favorite Stops 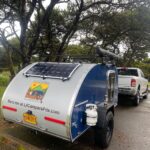 OregonI Explored The Oregon Coast In A Little Camper, Here’s Why You Should Too 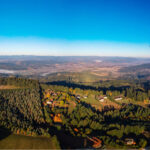