Lyon, the third-largest city in France, is a cornucopia of culture, architecture, ancient history, museums, and some of the best food and restaurants in France all waiting to be discovered.

A UNESCO Heritage site, Lyon traces its roots to one of the most important cities in the Roman Empire before 197 A.D. During the middle ages, Lyon was a key urban center of France, and during the Renaissance, a thriving silk industry altered the reputation of the city. By the late 1800s, 75 percent of the economy came directly from silk manufacturing, with over 100,000 operating looms employing over 30,000 people.

Located in mid-eastern France, Lyon is just over two hours by train from Paris and 90 minutes to Grenoble, which is a major skiing resort in winter.

Things To Do In Lyon

This is a shortlist of the must-see and do things in Lyon, which you can comfortably cover in two days. But ideally, allow three to four days to get a broader experience.

A myriad of hidden, indoor passageways, known as traboules, is the highlight of Le Vieux de Lyon, the ancient quarter of the city built in the 1500s and 1600s. The passageways, usually narrow gaps between the buildings, are subtly marked with signs that have a lion’s head and an arrow, so you have to be a little adventurous to find them on your own. Once you discover them, you will see how they were used as shortcuts for the silk craftsmen and manufacturers to transport their heavy and cumbersome rolls of silk. Guided tours of the traboules and former silk mills are also offered.

The Musee des Tissus et des Arts Decoratifs combines two museums under one roof: one for textiles and the other for decorative arts. Housed in two mansions constructed in the 1800s, the textile part of the museum has an extensive archive of international textiles spanning over 4,000 years. A major part of the museum is dedicated to the prominent silk industry in Lyon. The decorative arts section of the museum features furniture, antiques, tapestries, and objects from the original owners of the mansion.

Living proof of the Roman reign of Lyon, these two theaters are glowing examples of Roman architecture. Built in 15 B.C. by Augustus, the Great theater, a limestone arena, was used to perform tragedies and comedies and can hold 4,700 people. The smaller adjoining theater, the Odeon, seats 3,000 people and was used for political events, music, and poetry.

Every year in June and July, the theaters present a cultural festival featuring over 60 performances representing an international roster of artists, performers, dancers, musicians, poets, and singers.

Described as a floating cloud of stainless steel and glass, the Musee de Confluence is a striking, new structure that debuted in 2014. The museum is devoted to natural science, anthropology, and natural history with four permanent exhibitions: Origins – Stories of the World, Species – The Web of Life, Societies – Human Theatre, and Eternities – Visions of the Beyond. Situated on the endpoint of a peninsula between the Rhone and Saone rivers, Musee de Confluence has a public garden space with views of the rivers in addition to its indoor exhibits.

Discover the most famous and celebrated citizens of Lyon on La Fresque des Lyonnais, a gigantic, 2,400-square-foot, three-story mural that was painted by hand. Filmmaker Bertrand Tavernier; Michelin star chef Paul Bocuse; the patron saint of Lyon, Saint Blandina; The Little Prince author Antoine de St-Exupery; and the inventors of the first movie camera, brothers Auguste and Louis Lumiere, are among the 30 figures.

The biggest annual event in Lyon is the Fete de Lumieres, one of the largest light festivals in the world, attended by over two million people. The festival is held the first weekend of December, extending until Tuesday. In 2020, the dates are December 5 to 8. Festival activities take place at 40 locations all over the city, where attendees can marvel displays of some of the most technically advanced light shows in the world.

I attended the 2014 event, and it was an incredible thrill, so I highly recommend making a special trip, but make sure you book your hotel at least three months in advance.

Lyon is the other food capital of France next to Paris, and there’s always been a rivalry when it comes to which city produces the best chefs.

Paul Bocuse was the first acclaimed chef from Lyon to achieve international fame. In the late 1970s, he introduced a new, revolutionary style of cooking, nouvelle cuisine, which profoundly changed the nature of French food. His first restaurant, L’Auberge du Pont de Collonges, which is just outside of Lyon, opened in 1965 and has earned three Michelin stars in its years.

Bocuse died in 2018, but his restaurants are still considered some of the best in France. If you are a serious foodie, you must dine at a Bocuse restaurant. Besides L’Auberge du Pont de Collonges, there are four other Bocuse locations in Lyon. They are brasseries, offering a more casual and affordable dining experience, with prices starting at just over 30 euros for a three-course meal on Sundays.

Bouchons are local restaurants in Lyon that serve traditional Lyonnaise cuisine in informal, friendly atmospheres. There are approximately 20 official bouchons in Lyon, plus many other establishments that serve similar dishes.

Les Lyonnais is a certified Lyon bouchon that serves typical dishes such as salade Lyonnaise (frisee lettuce, poached egg, bacon bits, and croutons), sausage in brioche, and pike fish dumplings. The rustic dining room has photos of well-known celebrities who have eaten there.

Daniel and Denise is a family-owned, small chain of official bouchons with three locations. Their specialties include an award-winning duck and sweetbread pate, pork casserole, and mushroom soup with a poached egg — and their legendary Baba au Rhum.

8. Where To Shop In Lyon

Some of the best souvenirs and gifts you can take home from Lyon are locally made food products.

Lyon prides itself on its award-winning chocolate makers. If you purchase only one food souvenir, it has to be a bar of Bernachon chocolate, but after you try one, you will want to fill a suitcase full of them. Bernachon makes its own bean-to-bar chocolate using 10 varieties of beans. Flavors of the dark and milk chocolate bars include pistachio cream, coffee, hazelnut, and orange confit. Bernachon also has a delightful cafe next to its retail shop that serves decadent chocolate desserts.

Sebastien Bouillet takes his inspiration from the beauty counter and produces a clever line of chocolate lipsticks in addition to Lyonnaise sausages made of praline and record albums made of chocolate.

Since Lyon has been known for its exceptional silk products over the centuries, here are two top silk shops worth your consideration.

9. Best Places To Stay In Lyon

A historic hospital built in the 12th century has been transformed into the grandest and newest hotel in Lyon. The five-star InterContinental Lyon Hotel Dieu has 144 rooms and suites decorated in a contemporary style by hotel specialist Jean-Phillippe Nuel, and half of them have scenic views of the Rhone river. The Epona restaurant is led by chef Mathieu Charrois, who updates classic Lyonnaise dishes with a modern flair.

Centrally located on the Place Bellecour, Hotel Le Royal Lyon is a smart and chic boutique hotel. Elegantly designed rooms with touches of toile de Jouy print on the headboards also have furnishings and accessories by Ralph Lauren and Pierre Frey. 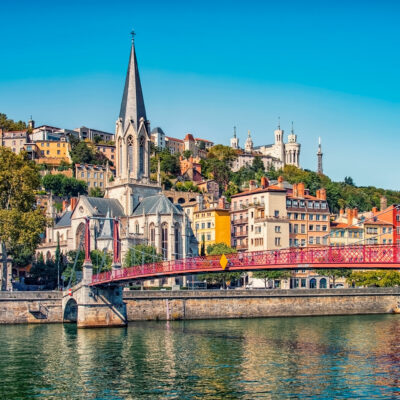 LyonHow To Spend A Day In Lyon, France