How To Spend A Perfect Day In Bisbee, Arizona

We went to Bisbee to attend a book launch for one of my husband’s favorite authors, J. A. Jance. Most of Jance’s books are set in Seattle, Washington, where she lived most of her life and where we lived before we started RVing. But several of her books, specifically the ones in the Brady series, are set in the town of Bisbee, where she was raised (more on Jance’s connection to Bisbee below). We were camping nearly five hours north of Bisbee in Cottonwood but were captivated and decided to go.

Bisbee, which is fewer than 12 miles north of the Mexican border, was founded as a copper, gold, and silver mining town in 1880. By 1920, the mining boom raised the population of Bisbee to its high of just over 9,000 residents.

Today, over 5,000 people make Bisbee their home. And it has transformed itself into a tourist and artists’ haven. It was in the middle of the 1970s when the transformation happened. By 1975, just like in other mining towns in Arizona, mining companies stopped their operations. Parent company Phelps Dodge Corporation worked with the local government to create a mine tour that was part of the town’s bid to become a tourist destination. Later on, the federal government took interest and provided federal aid to complete the development of the flagship tour of the Copper Queen Mine, which is one of many things you can enjoy during a perfect day in Bisbee.

Bisbee’s Queen Mine was one of the richest copper mines in history. Because of the redevelopment efforts, it reopened very quickly as a tour destination in 1976, less than 100 years after the mine originally opened. The Bisbee mines produced metals valued at $6.1 billion (in 1975 prices). It was one of the largest mines in the world. Eight billion pounds of copper, almost three million pounds of gold, and 77 million pounds of silver were taken from the ground here. A high-quality turquoise known as Bisbee Blue was a by-product of its copper mining days and today is a regarded and priceless collectible.

About 50,000 people a year, outfitted with a hard hat and a miner’s headlamp, take the Queen Mine Tour. We experienced firsthand, for about an hour, how miners worked, going down to 1,500 feet below ground. It was very cold down there. We were told the temperature remains at 47 degrees year-round. Back when the mine was operational, it was a diverse group of immigrant miners from Europe that tilled the Mule Mountain mines.

Bisbee’s development spurred artist Stephen Hutchison to purchase and redevelop the famed Copper Queen Hotel. Today, it is the most iconic lodging place in town. It was in 1898 when the Queen Consolidated Mining Company decided that they needed a comfortable place for the executives and dignitaries to stay when they visited the mines, especially considering most of their business was run from their Bisbee operations.

John Wayne, Lee Marvin, Lee Remick, Michelle Pfeiffer, Julia Roberts, Kiefer Sutherland, Ollie North, Nancy Reagan, Gabby Giffords, Jake Lamotta, and Linda Ronstadt are some of the famous people who have stayed in this historic hotel. John Wayne’s favorite room is up the main staircase on the second floor, and it is the most-requested room today. But the Copper Queen Hotel is even better known for those who checked in but never checked out. It is said there are 16 spirits haunting the hotel, and this is why I will never stay the night!

Originally built with 72 rooms with a shared bathroom suite on each floor, today, the Copper Queen is the only full-service hotel in town. We had a late breakfast of chicken fried steaks at the former Copper Queen Cafe and Saloon, which are both still in their original locations. They are now known as 1902 The Spirit Room and The Overlook Saloon. This is the same saloon where actors John Wayne and Lee Marvin once had a disagreement that ended with Marvin being thrown out a window by the Duke.

It is also interesting to know that the large boiler in the basement of the Mercantile Building across the street (owned by Phelps Dodge) was used to heat the Copper Queen Hotel through a tunnel, while The Palm Room on the first floor was used as an air well to provide cool air to the rooms during the area’s hot summers. The swinging double doors that do not lock and open to the lobby are still there, reminiscent of the good ol’ doors of the Western days. In fact, the Queen Copper Hotel is the longest continuously operated hotel in Arizona. Current rates are between $100 and $200 per night.

Another good thing to see in Bisbee is the former open-pit copper mine located near the famous Copper Queen Mine. Jeep tours are available if you want to see it up close. The Lavender Pit is not colored purple; instead, it got its name from Harrison M. Lavender, who, as vice-president and general manager of Phelps Dodge Corporation, conceived of making the previously unprofitable low-grade copper-bearing rock of the area into commercial copper ore. It was opened in 1950 and operated until 1974, producing 86 million tons of ore that yielded 600,000 tons of copper, plus gold and silver by-products.

While in Bisbee, you should not miss Erie Street. It is dubbed a living snapshot of a different time. It is like stepping into a Western movie set. Actually, it is what is left of Lowell, Arizona, a former mining town that was incorporated into Bisbee in the early 1900s. There are only three real stores on the street. The rest are empty. However, each year in March, the entire street comes alive with a festival that features live music, cars and motorcycles on display, and lots of food and drinks. We visited in December, and it was also good to see Erie Street’s Western Christmas decor.

Bisbee has a thriving downtown cultural scene in the area fondly called Old Bisbee. There are Victorian-style houses and an elegant art deco county courthouse. Compact and walkable, the center of town is quite hilly. There are a lot of stairs from which you can discover little stores or artists’ places. The best example, however, is the old four-story-high school that has a ground-level entrance for each floor given the way it’s built into the hillside.

If you have more than a day, there are three museums that would be good to visit. They can take you back to the gloried and storied past of Bisbee.

The Bisbee Restoration Museum is run by volunteers. The three-floor museum, housed in a beautiful historic building, has numerous items and artifacts donated or loaned by the long-standing families of Bisbee. Located in the heart of the historic district in the Fair building at 37 Main Street, they are open Thursday through Monday during summer and Friday, Saturday, and Sunday during winter. Entry requires a $2 donation that’s used to keep the museum’s doors open.

You can also visit the Bisbee Council on the Arts’ Mining and Historical Museum. This was once the headquarters of the Queen Consolidated Mining Company. The museum, however small, prides itself on being the Smithsonian Institution’s first-ever rural affiliate. Located at 5 Queen Copper Plaza, admission is under $10 per person with discounts for children and seniors. They say you haven’t really seen Bisbee if you haven’t visited this museum.

Lastly, there is the Muheim Heritage House Museum. It was built by Joseph and Carmelita Muheim for their growing family, with important additions completed between 1898 and 1915. The home has Queen Anne architectural influences and lovely gardens where you can enjoy a beautiful view of the surrounding mountains and hillside homes on Brewery Gulch. Located at 207 Youngblood Hill, the home’s restored interior and precious period furnishings have made it a National Historic Site. Docents provide guided tours, and the house is available for weddings and other private parties.

More On J. A. Jance’s Connection To Bisbee

In addition to being raised there, Jance books including Tombstone Courage, Remains of Innocence, and Downfall are set in Bisbee. On our way there from Cottonwood, we visited the off-the-beaten-path Arizona town of Tombstone. Tombstone is also on TravelAwaits’ Tucson to Bisbee Arizona road trip through the Old West, which could inspire your trip! 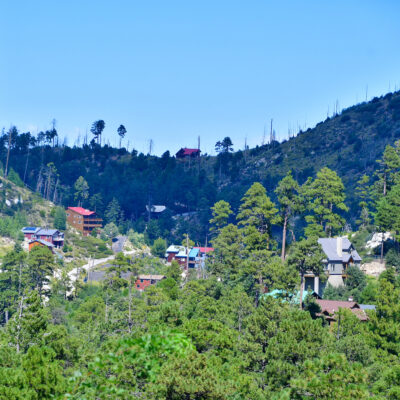