A Perfect Weekend In Taos, New Mexico: The Best Things To Do

Taos, New Mexico, was officially founded in the late 1700s, but people started settling in the area hundreds of years before that.

Taos is known for its rich history and distinct adobe buildings. In the heart of Taos is the historic Taos Plaza. Once a fortified village, today it’s the place where locals and visitors alike experience the town’s rich history.

Here’s what to see, do, and eat on a visit to Taos.

What To Do In Taos

A UNESCO World Heritage site, the Taos Pueblo is a living Native American community with buildings dating back to the 14th century. The buildings within the pueblo are made of traditional adobe and are not allowed to have running water or electricity.

During a guided tour of the community, you will meet some of the 150 people living in the pueblo and will be able to buy some of their handmade goods. Parts of the pueblo are off-limits to visitors, however, and there is a strict photography policy, so be respectful.

The Taos Pueblo is open most of the year, but it does close for a few weeks in the late winter, so be sure to check the events calendar. Admission costs $16 for adults and $14 for seniors.

Take a walk through history with this self-guided walking tour of Taos, featuring 22 historical markers, buildings, and landmarks. The tour will take you through the lively Taos Plaza past historic houses and present-day museums aimed at education and preservation.

For a spookier look back, consider the Ghosts of Taos walking tour. This nighttime tour will take you around the historic district past the old courthouse, an allegedly haunted inn, and more!

Drive a few miles west of Taos along U.S. Route 64 and you’ll cross the Rio Grande Gorge Bridge. Built in the mid-1960s, the bridge is one of the 10 highest in the country and was once named the nation’s most beautiful steel bridge. Indeed, it’s quite photogenic; stretching nearly 1,300 feet across the Rio Grande, the bridge has been featured in several movies.

You can park on either side of the bridge and walk across it on the sidewalk. Be sure to step out onto one of the overlooks — you’ll get that thrilling feeling of being high above the water below.

Built some 200 years ago, San Francisco de Asis Church is the only original church still standing in the area. Dubbed the “Ranchos Church,” the adobe structure has been depicted in works by painter Georgia O’Keeffe and photographer Ansel Adams. It’s such an integral part of the religious community that every year, parishioners gather to replaster the church in adobe in order to maintain its integrity.

Inside the church is a painting of Jesus nicknamed “The Mystery Painting” because it mysteriously glows in the dark. Today it resides in a temperature-controlled room, but you can see it glow for a small donation to the church.

There’s no shortage of outdoor activities in and around Taos.

In the summer, locals and tourists head for the water — whether that’s white-water rafting down the Rio Grande or fishing for trout in the nearby streams and rivers. Hiking and biking are also popular activities, with numerous trails inside the Rio Grande del Norte National Monument and the Carson National Forest. Or take to the skies for hot air balloon rides or thrilling zip-lining. Other summer activities include golf, disc golf, rock climbing, and horseback riding.

In the winter, the Taos Ski Valley offers 110 trails — the majority of them expert runs — for skiing and snowboarding. There are three other ski areas within an hour’s drive of Taos. You can also enjoy snowshoeing, cross-country skiing trails, tubing, and ice skating.

Where To Eat In Taos

No visit to New Mexico would be complete without a taste of its authentic Southwestern cuisine, from homemade salsas to native green chiles.

Orlando’s New Mexican Cafe is a no-frills, colorful cafe known for its tacos and red and green chile. Located about 5 miles north of the Taos Plaza, this popular restaurant often has a wait, but it’s worth it. And don’t forget to round out your meal with the sopapillas or strawberry nachos — they’re a real treat!

Don’t judge a book by its cover! This restaurant may not look like much on the outside, but La Cueva Cafe serves up some of the best mole in all of Taos. The laid-back joint is just minutes from the Taos Plaza and offers tasty breakfast dishes, too.

The Bent Street Cafe & Deli has been serving up breakfast and lunch for more than 30 years. Don’t miss the traditional huevos rancheros or The Taos, a sandwich piled high with turkey, bacon, and green chile in a chipotle tortilla. You’ll find this local favorite amidst the Bent Street shops.

Lambert’s of Taos is an upscale, family-owned gem within walking distance of the Taos Plaza. Its outdoor area is shaded by spectacular trees. The menu features fresh, made-from-scratch American dishes paired with an extensive wine list.

With at least a dozen beers on tap, Taos Mesa Brewing is a great spot for an afternoon craft beer coupled with live music. Located near the Taos Plaza, the brewery serves up pub fare sourced from New Mexico and nearby Colorado. It also offers daily happy hours.

For a sweet treat, make your way to Taos Cow, where every ingredient — from the dairy to the lavender — is sourced from nearby farms. You’ll find traditional ice cream flavors here, but it’s worth trying one of their Southwestern-inspired creations, like the Mexican Chocolate, Piñon Caramel, or Chocolate Rio Grande.

Where To Shop In Taos

The authentic Native American jewelry, clothing, food, and pottery are reason enough to visit Taos. Add to that the exquisite art galleries, and you could easily spend your entire trip shopping.

The Taos Plaza itself has a number of art galleries featuring work by local artists, plus niche stores selling collectibles. In the summer, the plaza comes alive on Saturdays with a farmers market.

Art lovers flock to Kit Carson Road for its numerous galleries and storied Saturday Art Walks. Browse the galleries for pieces by up-and-coming local artists as well as works from the past.

Take a break from the galleries by visiting Kit Carson’s home and learning about the famous pioneer and his ties to Taos.

On Bent Street, you’ll find jewelry shops, clothing stores, art galleries, and home decor as well as shaded patios and colorful gardens. On the first Friday of each month, the street comes alive with street performers, open houses at the stores, and other special events.

Known for being one of the most colorful streets in Taos, Ledoux Street boasts adobe shops selling everything from art to locally made goods. The entire area is decorated with murals and flowers.

Where To Stay In Taos

Hotel La Fonda de Taos is right in the heart of historic Taos Plaza. With the plaza right at your front door, this is the perfect place to stay to be within walking distance of the city’s galleries, restaurants, and events.

La Fonda is Spanish for “The Inn.” The hotel was built in the 1800s and used as a store with a few rented rooms above it. The building has since been renovated with its roots in mind and now provides a colorful walk through history.

The hotel specializes in romance packages and does not allow children under the age of eight.

The historic Taos Inn describes its 45 guest rooms as “quirky.” And it seems that others agree. National Geographic Traveler named the place one of America’s best inns for its unique charm and lively social scene.

Guests enjoy free access to yoga, an indoor pool, and coffee each morning. Locally sourced Southwestern cuisine is available at the on-site restaurant, Doc Martin’s. The inn is also home to the Adobe Bar, which offers nightly live music along with award-winning margaritas.

For an exclusive, relaxing time, stay at El Monte Sagrado. It will cost you extra, but the perks are worth it.

The accommodations include traditional hotel rooms, casitas, and private suites, all surrounded by peaceful brooks and waterfalls. Its top-rated on-site spa, The Living Spa, offers a variety of treatments with only all-natural or organic products. After your treatment, you can relax in the Sacred Circle, a spot once used for meditation by local tribes. With a restaurant serving breakfast, lunch, and dinner and a lively bar serving up craft cocktails, you might never want to leave this oasis.

Pro Tip: Taos plays host to a number of cultural events throughout the year that are a delight for both the eyes and the soul. Attending one will be memorable, but be sure to book your hotel early, since these events are popular.

For more to see and do in New Mexico, see this page. 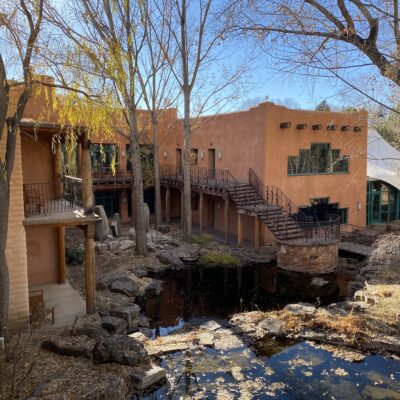 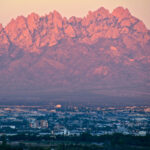 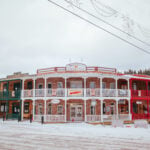 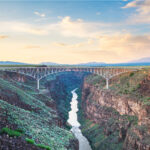