Nothing beats walking to find the soul of a city. So, when I visited Seoul, South Korea, in December 2019 while I was housesitting, I signed up for several walking tours — all of which were offered free of charge!

Some tours of the more traditional tourist sites are organized by the Seoul tourism offices, while some off-the-beaten-path tours are guided by Korean university students who want to practice their English, show off their favorite “hidden gems,” and earn a few won in tips.

There are actually about 60 free walking tours offered (29 are offered by the city of Seoul alone!), but here are seven to get you started. So, break out your sneakers and get ready to walk, stroll, climb, and savor Seoul!

Guided by 24-year-old art major Rim Jeonghye, this tour found me and fellow tourist Pierre, an American vacationing from teaching English in China, panting up 292 steps to Haneul Sky Park and its fabulous views of the Han River and Seoul’s towering skyline. A reclaimed landfill, the park is best known for its silver grass, which is celebrated during a festival every fall.

After working up an appetite, we headed to the extensive Mapo Agricultural and Marine Market. Pierre had heard that eating live octopus (called sannakji) is a special Korean delicacy, so Rim led us to an octopus vendor who chopped up a small octopus and doused it with sesame oil. Since the dismembered tentacles were still wiggling on the plate, I passed.

Next up was a stroll through Mangwon Market, a local, non-touristy food market with raw and prepared foods. Rim knew every stall that offered free samples, so we had our own private — and free — street food tour!

Tip: Wear layers to shed as you hike up the stairs. And come hungry!

Other free tours offered by TodaysFriend include guided walks around Dongdaemun Culture Park, the Ikseon-dong neighborhood, and Deoksu Palace and Seoul’s City Hall.

I walked around Seochon, one of Seoul’s art-oriented neighborhoods, on a City of Seoul walking tour. Dotted with art galleries and trendy coffee shops, this hilly area features the Sangchonjae Hanok House, a refurbished traditional home with 19-century underfloor heating (called ondol, a feature still used today). My guide and I took a break at the base of the Suseongdong Valley before window-shopping along a boutique-lined alley.

Tip: Since these volunteer guides do not accept tips, treat them at a coffee shop. We stopped at an en-route cafe for the most sumptuous dark hot chocolate drinks!

Reservations must be made online at least three days in advance.

Built in 1395, the Gyeongbokgung Palace, whose name means “The Palace Greatly Blessed by Heaven,” is nestled between Mount Bugaksan and Mount Namsan. Today, surrounded by high-rise office buildings, it stands as a monument to fortitude: The Palace has been destroyed and rebuilt three times.

There are many local tour companies that charge for their guided tours, but free English tours are offered at the palace three times each day at 11 a.m, 1:30 p.m., and 3:30 p.m. No reservations are necessary.

Tip: Deck yourself in hanbok (traditional Korean attire) from one of the nearby clothing rental shops and enter the palace grounds for free. Otherwise, the cost is 3,000 won (about $2.50).

Bukchon is a well-preserved neighborhood of hanok — traditional Korean homes — that are now a network of private residences, traditional craft workshops, guesthouses, cafes, tea houses, and boutiques. The Soul Free Walking Tour starts at the Bukchon Traditional Cultural Center, which is an actual hanok with rice paper doors and underfloor heating.

As we wandered the narrow streets, my three guides stopped for a street food treat and for photo ops at spectacular views over the gracefully up-turned arched roofs. We went on to Chung-Ang University, a former kindergarten that served as a secret meeting spot for Korean dissidents during the Japanese occupation.

Finally, we stopped at the Dong-Lim Knot Workshop, where I had the option for 7,000 won ($6) to create my own bracelet using traditional garakji knots. (It’s a lot harder than it looks!)

My guides — three smart, personable students studying microbiology, international relations, and fashion design — and I were having so much fun, we lunched at a traditional Korean restaurant.

Tip: Bukchon is hilly, so be prepared to climb. Also, these guides do not accept tips, so a coffee or street treat is appreciated!

Other free tours offered by Seoul Free Walking Tours include a political tour of the Gwanghwamun area to explore Korea under the Japanese occupation and a tour of Bongeunsa Temple to explore Korean Buddhism.

With at least three weeks’ notice, foreigners can schedule a tour of the Republic of South Korea’s President’s gardens outside Cheong Wa Dae, the official residency and administrative compound of the president and first lady.

Colloquially called the Blue House because of the shiny blue tiles that make up its roof, this is where cabinet meetings, receptions for state guests and diplomatic events take place. The one-hour tour covers Nokjiwon (the Green Grass Garden, which features a 170-year-old pine tree and is where public events are held), the site of the original Cheong Wa Dae building, and Yeong Bin Gwan (the State Guest House).

You must apply online and provide your passport information. Once approved, you will receive a confirmation email and code.

Tips: Remember to take your passport; you will be asked for it several times. But leave behind large bags and political leaflets. Also, read up on the Blue House before you go, as there are no live bilingual guides, although a brief English-language recorded audio guide is provided (free). I recommend listening to the audio guide before your tour (there are several minutes waiting in an auditorium before the tour starts).

During a sobering tour offered by the university students volunteering with Seoul-Mate Tours, you can visit Seodaemun Prison. The prison was built by the Japanese during their occupation of Korea from 1910 to 1945 and was where 3,000 Korean freedom activists were tortured, imprisoned, and executed.

Four students led my tour, each explaining one section of the prison — and of Korea’s dark history under the occupation. Korean men were conscripted to serve in the Japanese Army and Korea’s women were conscripted to serve as sex slaves (or what the Japanese called “comfort women”). One of the students spoke about the experiences of her grandmother, who was forbidden from speaking Korean during the occupation and was forced to adopt a Japanese name.

The tour is extensive, allowing visitors to go into isolation cells, to stand in coffin-like sensory deprivation boxes, and to enter into an execution chamber where prisoners were hung. The prison grounds also included factories where prisoners made their own uniforms and, later, supplies to support the Japanese war efforts.

Seoul-Mate offers 14 other walking tours — all less intense than this one — including walks through and around the National Hangeul Museum and the Seoul City Wall.

Tip: Again, these students do not accept tips, so treating them to coffee is not only appreciated, but a further opportunity for them to practice speaking English and for you to interact with these smart, well-traveled students.

Go underground at the Gwangmyeong Cave, a former gold mine, during one of Korean Transit Tours six walking tours for short-term visitors passing through Seoul. With a layover of up to 24 hours, you could walk off jet lag at Jeondeungsa Temple, the hip area of Insa-dong, the Triple Shopping Street, the World Cup Stadium, or one of Seoul’s food markets.

Tip: Be sure to be on time at your meeting spot, or risk paying a hefty fee for a taxi back to the airport to catch your flight!

What a way to walk off all that fabulous Korean barbecue and street food!

Visiting South Korea? Read up on 7 beautiful places in Seoul, plus 13 things I wish I knew before visiting the city. 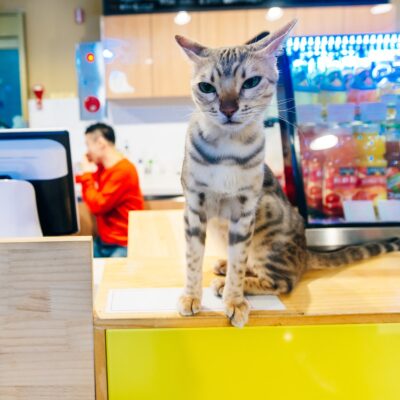 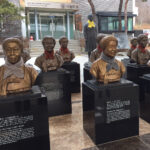 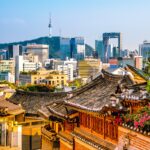 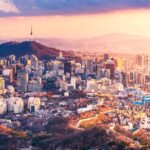