8 Reasons To Visit The Church Of Saint Sulpice In Paris

With its dramatic flying buttresses, kaleidoscopic stained glass windows, and seven decades of history, it’s no wonder the medieval cathedral of Notre Dame has historically welcomed 13 million visitors each year. But with Paris’s beloved cathedral closed for the next five years due to a devastating fire, her second-largest church is even more worthy of a visit.

Known as the Cathedral of the Rive Gauche, the Church of Saint Sulpice is located in the Odeon Quarter of the sixth arrondissement. With Notre Dame’s closing, it’s the largest church in Paris that is able to celebrate Mass and welcome visitors, and it’s temporarily serving as the city’s cathedral.

Here are eight reasons to visit the Church of Saint Sulpice in Paris.

1. It’s Not As Crowded As Notre Dame Or Sacre Coeur

Before the fire in April 2019, millions of tourists regularly crowded onto Ile de la Cite, an island in the Seine, to visit Notre Dame. And on any given day, you’ll find throngs of tourists milling about Montmartre and gazing up at the pearly white travertine towers of Sacre Coeur. But visiting the Church of Saint Sulpice feels like an everyday experience. Babies are baptized, priests hear confessions, and Mass is celebrated daily. When you visit the Church of Saint Sulpice, there’s a good chance you won’t see many tourists.

2. It’s Home To A Special Sundial

To ensure the church bells rang at the proper time each day, Saint Sulpice priest Jean-Baptiste Languet de Gergy hired English clockmaker Henry Sully to build a special type of sundial into the church in 1728.

On a traditional sundial, the gnomon is the triangular piece that juts out and casts a shadow on the circular face. And embedded into the church floor of Saint Sulpice, a brass line performs a similar time-telling task.

Here’s how it works: When the sun is directly overhead at noon, light shining through a hole in one of the cathedral’s southern stained glass windows casts a small circle of light onto the cathedral floor. And as the Earth orbits the sun, the small circle of light appears in a different spot along the brass line. The sunlight traveling along the gnomon hits an obelisk on the north side of the church on the winter solstice.

3. It’s Featured In Dan Brown’s The Da Vinci Code (But Fiction Is Not Fact)

If the equinox-predicting abilities of the gnomon of Saint Sulpice sound vaguely familiar, then you’ve likely read The Da Vinci Code or seen the movie starring Tom Hanks as Professor Robert Langdon. But Dan Brown is a novelist, not a historian. So while the bestselling book featured the gnomon, the device was incorrectly referred to as the Paris Meridian. Brown also gave it a fictional name, the Rose Line.

The Da Vinci Code did result in a dramatic increase in visitors to the church in the early 2000s, as fans trekked away from the usual tourist attractions in the footsteps of Silas, the Opus Dei monk (pure fiction — the real-life Opus Dei organization doesn’t have monks) searching for the Holy Grail. However, it’s been about two decades since the book was published, and tourist traffic to the church has largely died down.

4. It Has An Interesting, Eclectic Architectural Style

In part because it was built in fits and starts over more than a century, the Church of Saint Sulpice is truly one of a kind. It features a blend of baroque and neoclassical styles, since the plans were passed from one architect to another over 130 years.

Similarly, the columns supporting the double portico showcase different styles. Look for Doric columns on the main level and Ionic columns on the second-story portico when you visit. And as your eyes continue upward, you’ll likely notice that the south tower was never finished.

5. Its Fountain Of The Four Cardinal Directions Is Impressive

In a prominent location in front of the church is the Fountain of the Four Cardinal Directions. Designed by Louis Visconti, the same Italian architect who designed Napoleon I’s tomb, the fountain is as impressive as it is cheeky.

Water cascades through three octagonal pools on different levels as roaring lions guard the four corners of the center plane. And seated in arched niches facing north, south, east, and west — the cardinal directions — are four notable French bishops. However, despite their dedication to the Church and work as religious scholars, none of the men ascended to the rank of cardinal. Visconti showed his admiration with this tongue-in-cheek nod to their contributions.

6. Its Organ Is One Of The Largest And Finest In The World

With its brushed steel pipes surrounded by intricate wood carvings of robed musicians picking at harp strings and strumming lyres, the organ at Saint Sulpice is absolutely breathtaking. Built in 1862, the organ is hailed as the greatest work of Aristide Cavaille-Coll. And, at more than 150 years old, it’s still considered one of the world’s most magnificent instruments.

Each Sunday at 10:45 a.m. sharp, Saint Sulpice organist Daniel Roth breathes life into the 6,600 organ pipes as his toes dance across the wooden floor pedals and his fingertips glide effortlessly across the keyboard. As worshippers file into the cathedral, he plays for the 15 minutes leading up to the 11 a.m. Mass as well as throughout the scheduled service.

7. It Doesn’t Have Pews (And Its Holy Water Fonts Are Quite Unusual)

In the United States, most Catholic churches have rows of wooden pews where parishioners sit during Mass. But in the centuries-old churches of France, worshippers often sit on individual wooden chairs with woven wicker seats.

In churches without pews, there aren’t padded kneelers built into the seating for Catholics to use during the Liturgy of the Eucharist. So French churchgoers will either bring their own kneelers, kneel directly on the tile floor, or remain seated during that part of the Mass.

8. It Was The Site Of Several Notable Events

In Catholic churches around the world, babies are baptized, couples are married, and families bid farewell to loved ones who’ve passed away, and the same is true of the Church of Saint Sulpice.

For example, the Marquis de Sade was baptized in the Church of Saint Sulpice. (Ironically, the French politician and nobleman would go on to be infamous for his controversial writings and questionable behavior.) Victor Hugo, who wrote Les Miserables and The Hunchback of Notre-Dame, married his childhood sweetheart, Adele Foucher, at Saint Sulpice in 1822. And when the beloved former French president, Jacques Chirac, passed away at the age of 86, dignitaries from around the world attended his funeral Mass at the Church of Saint Sulpice.

The Church of Saint Sulpice is away from the popular Paris attractions that hug the Seine, like the Musee d’Orsay and the Eiffel Tower, but there are plenty of worthwhile sights to visit nearby. 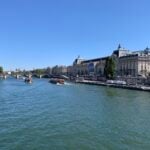