The Best Things To Do Around The Finger Lakes

The Finger Lakes region stands out when planning a vacation in Upstate New York. The roads meander through the area, tours are available, and many visitors fly in. There are several airlines servicing Elmira, the closest airport to Corning, but other airports include Finger Lakes, Ithaca Tompkins, and Penn Yan. Consider beginning your itinerary around the region by renting a car, or take a pleasant bus ride into the town of Corning, largest in the Finger Lakes area.

Rand McNally named Corning the most fun small town in America for a multitude of reasons. There’s beautiful architecture, a world class glass museum, and trails that satellite out into the region from there.

Historically, Corning has been at the forefront of glass-making technology and science for generations. Many think it’s famous just for the cooking dishes, Corningware, made popular in the 1950s, but glance at a cell phone for evidence of how relevant the Corning company’s work is today. Gorilla Glass has gone far to make cell phones more impervious to cracking and has even been used in the Space Program. The Corning Foundation has gone far to highlight the historical and cultural significance of glass in the world-class museum, originally opened in 1951 and renovated and repaired over the decades. In 2001 the newest wing, designed for contemporary glass, opened to wide acclaim.

Plan on spending a full day at the museum. Walk the contemporary art galleries packed with international and commissioned pieces set in the new wing. The history of glassmaking displays reach back to the Egyptians and the historical displays highlight everything since. Attend glass-blowing demonstrations or sign up to blow your own glassware. Leave room to peruse the cavernous gift shop and, when ready to leave, take the shuttle downtown.

The only Smithsonian Affiliate in Upstate New York, the Rockwell Museum fills Corning’s former City Hall building with three floors of art that exemplify America’s push westward. There are masterpieces by Remington, traditional bronze sculptures, and Native American artwork. Kids can play in the Art Lab and teens can participate in Art Hunts. Anyone under 17 can enter the museum for free.

Corning’s downtown is packed with small stores and restaurants for both casual and fine dining as well as breweries and wine shops. Top choices for dining include The Cellar, Hand + Foot, Sorge’s Restaurant, Three Birds, and Market Street Brewing Company. Festivals and music fill the streets on weekends in the summer season. Visit Little Joe Tower, which was built in 1912 as a monument to Corning’s technological innovations. The tower was recently renovated with a bronze sculpture of a gaffer and his glass-blowing equipment. The West End Gallery has been showcasing art for over 40 years. The galleries house rotating exhibits from over 60 artists with selections from contemporary to classic. All are available for purchase.

Wrap a visit around nearby Watkins Glen International Racetrack, which hosts famous races, wine and beer festivals, a vintage grand prix, and concert weekends. Sign up to “Drive the Glen” in your own car. Take two laps with a guide and stop at the Finish Line for photos. You can also consider spending a few nights glamping or register for a campsite on the property.

Outside of Corning, visitors will find memory-making adventures for the whole family. Here are a few of the top attractions in the area.

Of all the waterfalls and parks nearby Watkins Glen State Park leaves visitors spellbound. The Glen trail passes 19 waterfalls as it meanders beneath 200-foot-high cliffs. Step cautiously as spray often leaves parts of the route slippery. Experienced trekkers often start at the top level of the Glen for an easier hike. Leave your car, walk down, and then take the $5 shuttle bus back to the parking lot. Definitely bring a camera.

Looking for a swimming hole? Venture to Robert Treman State Park. The park won National Natural Landmark for its “significant examples of the nation’s biological and/or geological features.” The rare Round Lake is meromictic, meaning the bottom and surface waters don’t completely mix. Jump in and you may find a cold surprise as the warmer surface water never blends with the colder water below. Most park swimmers and rock-divers gather at Lucifer Falls to float in the shadow of trees or lounge under the waterfall. Lifeguards are on watch during the summer season.

A Multitude Of Finger Lakes Experiences

Reisinger’s Apple Country is open during harvest months for U-Pick fun between August and November. The tasting room offers an array of ciders and preserves from Reisinger’s peach, apple, and plum orchards.

Located in Corning, Heritage Village of the Southern Finger Lakes is a living history museum and the site of numerous original 18th- an 19th-century structures, including Benjamin Patterson Inn, original to the site and first known as Jenning’s Tavern, which was built in 1796. There is a schoolhouse, an 1850s log cabin, a blacksmith shop, and one recreated structure: the Starr Barn. Depending on the season, there are heritage gardens full of herbs and vegetables. The 90-minute guided tours are very popular. Check online for availability. Heritage Village is affordable and kid friendly.

Go Soaring at Harris Hill, where pilots take ticketed visitors aloft for quiet and smooth glider rides. There are Soaring Contests in July during which glider pilots from the region compete. Not flying? There’s no charge to drive to the ridgetop and watch the gliders soar above. Some benches are available, but consider bringing a blanket so you can watch and relax.

Connect with a pioneer aviator, Glenn H. Curtiss. The museum in Hammondsport is dedicated to his memory and packed with a priceless collection of early aviation artifacts as well as antique tools, toys, motorcycles, and fire equipment. In 1907, Curtiss became famous as the “fastest man on earth” when he built and raced his V8-powered motorcycle over 136 miles per hour. The next year he flew his flying machine, named the June Bug, over 5,000 feet to win a Scientific American Trophy. His historic aircraft is on display in the museum.

Stay on or tour the Farm Sanctuary near Watkins Glen. The sanctuary rescues abused farm animals who then live out their lives on a 271-acre estate. Walk the land on an hour-long tour, peruse the visitor center gift shop, and have a snack on the deck overlooking the sanctuary’s fields. Reserve a few nights in one of the tiny houses or cabins and enjoy a vegan breakfast in the morning. Guests and visitors can get hands on with the animals, walk the pens, and meet many of the over 800 rescued residents.

Have a Fine Wine Time In The Seneca Lake Region

The Finger Lakes was named the Best Wine Region in the country by USA Today readers in 2015 and continues collecting accolades. If you’re not sure where to start, consider the Seneca Lake Wine Trail created by a non-profit collaborative dedicated to local winemakers. Pick up their seasonal Passport Program booklet for significant wine tasting discounts at participating wineries.

You can order a Passport online or pick one up when you arrive. Once the Passport is in hand, enjoy a complimentary, standard flight of wines at each of the participating wineries. Non-passport holders pay between $3 and $6 per winery. Plan on visiting 8 to 10 wineries and the savings are significant. The wineries are relatively close and you won’t have to travel more than 20 minutes between tastings. Seneca Lake stretches more than 35 miles with over 50 wineries in the area.

One significant vineyard has been family run for over seven decades. Generations of grape growers have been producing award-winning wines at Lakewood Vineyards. Chosen as Wine Family of the Year by Vineyard and Winery Management Magazine in 1997, Lakewood Vineyards’ the wines have garnered over 650 awards.

Stay In A Historic Castle

Belhurst has been named a World’s Best Wine Hotel by Wine Enthusiast and is listed on the National Register of Historic Properties. The estate features a renowned winery and several historic lodging options, from a castle to a manor and cottages. The 1880s stone Belhurst Castle overlooks Seneca Lake. Rooms are furnished in antiques with choices of soaking tubs, fireplaces, and lake views. The Georgian-style mansion, White Springs Manor, also on the Belhurst property, is more secluded with vineyard views and a spring-fed pond. Vinifera Inn has luxuriously modern accommodations on the Belhurst grounds. Every room has a fireplace, jacuzzi, and a two-person shower. Very romantic!

Running adjacent and east of Seneca Lake, the southern Cayuga Lake area has dozens of roadside attractions and the Museum of the Earth is sure to delight children of all ages. There are hands-on exhibits and a massive collection of fossils including one of the most complete Mastodon skeletons ever found.

The Cornell Botanic Gardens include an arboretum and natural areas tours. A vast rail-trail system is underway to link the Cornell, Varna, Etna, Freeville, and Dryden communities with over 20 miles of motorized and off-street pathways. 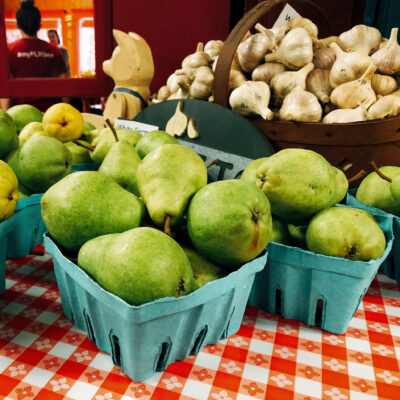 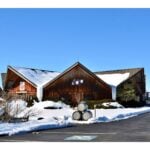 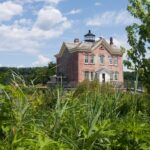 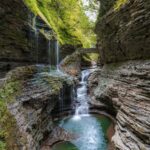