The Best Things To See And Do In Chattanooga, Tennessee

At a recent dinner party, I was asked “What’s the most surprising city you’ve been to recently”? My answer was quick: Chattanooga, Tennessee. Of all the places I’ve visited recently, Chattanooga was easily the one that left me saying, “Why didn’t more people tell me to come here?”

Chattanooga sits right on the Tennessee River near the border with both Georgia and Alabama. It is part of the Cumberland Plateau, which runs directly through central Tennessee — from Kentucky to Alabama — and is known for its sandstone outcroppings. So for starters, you know you’re going to get some amazing topography in Chattanooga. But this area is much more than just the spectacular views or river valleys. Here are some of the best things to see and do in the city.

If you’ve been to the area before, or just driven through, this one might bring back memories of billboards (and painted barns) along the interstate telling you to Visit Lookout Mountain. Most of what those billboards are advertising are the paid attractions on Lookout Mountain: Ruby Falls, an underground waterfall; Rock City and its advertised “See Seven States From Here” overlook; and the Incline Railway, a rail car that will take you to the top of Lookout Mountain.

When my wife and I drove up to the top of Lookout Mountain, there were attendants with flags trying to wave us into the parking lot for Ruby Falls, which we originally thought was perhaps the park at the top. But we followed the map, kept driving, and discovered the amazing views at the summit.

When we reached the top, we followed the signs to Point Park. This area is maintained by the National Park Service as a national military park given its history, but this is not like visiting Gettysburg or some other famous battlefield. The park is small and simply reveals where the troops would set up on the mountain as they attempted to protect the valley below. You can see why this was the coveted spot during historic battles in the area. From the mountain, you can see for miles in several directions (hence the name).

There is a fee to enter the park, but it’s worth it. The views of the city below are incredible. My wife and I were feeling adventurous, so we walked down some stairways to the Bluff Trail and followed that to the south and east all the way to Georgia. We wanted to say that we walked to another state, so we walked the two miles to the Tennessee/Georgia border and then turned around. The Bluff Trail itself is very flat, but be forewarned that accessing the trail requires going down (and coming back up) more than 100 stairs.

Before driving back down to Chattanooga, my wife and I drove around the neighborhoods at the top of Lookout Mountain. The homes are spectacular. I cannot imagine waking up to some of those views every day. If you love driving around neighborhoods with amazing homes, this is your spot.

Downtown Chattanooga has made a big comeback in the last 30 years. And a big piece of that was the construction of the Tennessee Aquarium right on the riverfront. This area, known as Ross’s Landing for when trader John Ross first set up his trading post on the banks of the river, has been fully revitalized in recent years.

I’ll be honest, prior to our visit, I viewed aquariums as something for kids — a school field trip destination — so I was skeptical when my wife suggested that we tour the aquarium. But that skepticism fell away quickly. The facility is very, very impressive.

The aquarium is contained in two buildings. One is the River Journey, the other the Ocean Journey. So one building houses all freshwater animals, the other building all saltwater animals. It’s a guided journey through both buildings, so you’re not just looking at big tanks full of fish. You’re following a journey from creeks to streams to rivers to the ocean.

Just to the west of the Tennessee Aquarium is the entrance to the Walnut Street Bridge. This bridge, constructed in 1891, was built to carry your horse-and-buggy over the Tennessee River. Eventually it carried vehicular traffic, but in 1978, with other modern bridges built nearby, it was closed and fell into disrepair. As part of the downtown revitalization, the bridge was reopened in the 1990s as one of the longest pedestrian bridges in the world.

My wife and I love a good walk after a meal, so that’s where we headed after dinner in downtown Chattanooga. It’s completely safe and isolated from the roadways at either end, with the sidewalks and public plazas designed to make it feel like it has been a pedestrian bridge all along. The bridge decking was replaced with wooden planks, so it feels like a historic stroll down an old boardwalk. And the views are amazing — you can walk across the entire bridge and look back across at downtown Chattanooga.

Depending on the time of year when you visit the bridge, you might be able to catch a festival as well. The most popular festival — the Wine Over Water event, where you can sample more than 150 wines from around the world as you walk across the bridge — is hosted in October. There are also many marathons and Ironman competitions that use the bridge as part of their routes. Whatever is happening in downtown Chattanooga, the Walnut Street Bridge is usually at the center of it.

Take A Cruise On The Southern Belle

Chattanooga is centered around the Tennessee River. And it’s not just a single river landing — the majority of the downtown area is nearly surrounded on three sides by the river as it snakes through the valley. So getting out on the river to see all of the sights from every angle can be a great way to experience the cityscape.

One way to do that is a lunch or dinner cruise on the Southern Belle riverboat. The riverboat is docked right downtown along the Tennessee Riverwalk at Ross’s Landing. Make reservations in advance for either lunch or dinner, then enjoy a relaxing cruise along the river as you take in all the sights and sounds of the river valley and downtown Chattanooga. If you go during the summer, especially when there’s a minor league baseball game going on downtown (the Chattanooga Lookouts, of course), the views of downtown from the river are amazing.

There are, of course, many great places to eat in Chattanooga. I’ll start with my favorite meal of the trip, which happened to be breakfast on Sunday morning.

The Blue Plate is located right downtown near the minor league baseball stadium. It looks out over an empty block (a field of grass) next to the river. Perhaps this block will someday be developed, but for now, it allows for full views of the river if you’re sitting on the Blue Plate’s patio.

We went for breakfast. There was a wait, but they gave us a pager and we were able to stroll the riverfront while we waited for our table. I had the breakfast burrito with chorizo (so good!), and my wife went with the biscuit plate. The Blue Plate puts a modern spin on diner food, so you can order many of your breakfast favorites, from pancakes to omelettes to French toast.

Tucked deeper downtown in the Warehouse Row area, Public House is yet another great restaurant in downtown Chattanooga. If you’re looking for a high-end dining experience, this is your spot. But make sure to get reservations before you go, because you will need them.

Perhaps the best description of Public House comes from the Chattanooga Chamber website, which lists the restaurant as “a refined approach to the Southern ‘meat and three’ menu.” Their dinner menu includes items such as duck confit and red wine braised pot roast. For an appetizer, try the pecan smoked trout spread.

Big River Grille and Brewing Works has two locations — one downtown and one in Hamilton Place near the Hamilton Place Mall. We ate at the location downtown just prior to our stroll across the Walnut Street Bridge.

The restaurant is also a working brewery, so make sure to sample their beers. For dinner, try the lobster and shrimp enchiladas, or perhaps the flame-grilled meatloaf. And make sure to save room for their signature dessert (and my wife’s favorite): carrot cake.

Our weekend in Chattanooga wouldn’t have been complete without my wife and I checking out a few of the shopping experiences. And the first, especially, was quite unique.

This shopping district is genuinely unexpected. Originally, it was the site of a Civil War fort. Then, in the early 1900s, it became the warehouse district for downtown Chattanooga. In the 1980s it was redeveloped again, this time turning the old, abandoned warehouses into a unique shopping area.

The shopping center has several national stores (like J. Crew, Anthropologie, and lululemon), but also many local shops. Check out Revival for home decor, antiques, and luxury gifts. Or stop by Amanda Pinson Jewelry for unique and chic jewelry.

If you decided to walk across the Walnut Street Bridge, there’s a great shopping destination on the other side: NorthShore Chattanooga. This collection of shops, coffeehouses, and galleries is a great place to unwind before your journey back across the river.

There are several great art galleries here, so if that’s the type of shopping experience you’re looking for, this is your spot. There are also bookstores, jewelry stores, home furnishing boutiques, and even an outdoor outfitter.

Once you’ve gotten your fill of shopping, enjoy a nice, comfortable stroll back across the Walnut Street Bridge as you look at the incredible views of this surprising city.

Road tripping through the state? Don’t miss these eight stunning must-see waterfalls in Tennessee — and, yes, one of them is on Lookout Mountain! 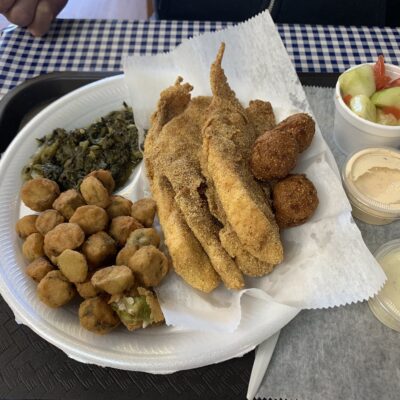 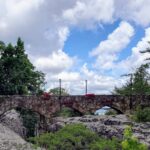 ChattanoogaI Saw Rock City, Here’s Why You Should Too 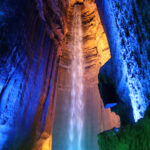 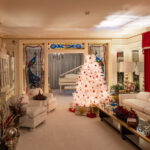