Tucked against the Baltic Sea, Estonia consists of a relatively small mainland and 2,222 islands, and in recent years, travelers have flocked to the country to enjoy its unique culture and temperate climate. That’s partially due to the wide range of available activities for tourists. Whether you’d prefer to explore the countryside, sail to the islands, or walk the streets of Viljandi, you’ll certainly stay busy.

With that said, travelers often omit some of Estonia’s most breathtaking sites from their itinerary. Here are a few of the nation’s beautiful places that you shouldn’t miss.

Some travelers spend their entire trips in Viljandi, and when you stop by this quaint town nestled in the southern Estonian forests, you’ll see why. Bright gardens and traditional wood buildings line the streets while locals pass by on bicycles, and the slow pace of life creates a relaxing atmosphere ideal for vacationers. The nearby Lake Viljandi offers more excitement, along with stunning natural vistas, and a variety of hiking trails are accessible from the outskirts of the city.

Viljandi offers easy access to many of the other sites on this list, including Soomaa National Park. If you can find accommodations, try to visit in late July, when the Viljandi folk music festival draws thousands of travelers from around the world.

There are more than 800 sacred groves in Estonia, and Suur and Vaike Taevaskoda are two of the most important. Located along the ancient Ahja River, these outcrops are revered sites, and locals visit them to pray, present offerings, and receive blessings.

The sandstone cliffs and caves are believed to be home to spiritual beings, and the springs are said to have restorative powers. Whether or not you’re a believer, Suur and Vaike Taevaskoda are two of the most peaceful places in all of Estonia, and the untouched, natural setting certainly has a calming effect.

A powerful rock sits on the northern shoreline of Saaremaa Island, providing a stark and engaging view of the Baltic Sea. Panga Cliff is more than 65 feet tall at its highest point and spans a distance of 1.5 miles. The cliff face is remarkably serene, but that wasn’t always the case — archaeological evidence suggests that it was used for ancient sacrifices.

Today, the cliff is a great place to watch a sunset, enjoy a picnic, do some bird-watching, or take some spectacular photos. Take care to note the weather conditions when visiting, however, since high winds can quickly make this spot less enjoyable.

Take a step into a spectacularly biodiverse world of primitive forests, bogs, and meadows in Soomaa National Park. This preserve offers nature lovers an array of season-specific activities, including hiking, bogshoeing, snowshoeing, kicksledding, canoeing, and mushroom picking. Check out the Hupassaare Study Trail, which leads through the forest to the Kuresoo bog.

Again, watch the weather. This national park has what’s known as a “fifth season,” when melted snow and ice flood many areas. During times of heavy rain, canoes are the only viable form of transportation.

Set along the Narva River, protecting the border between Russia and Estonia, the Narva Castle (also known as the Hermann Castle) has stood strong since the 13th century.

One of the most popular sites in eastern Estonia, it’s also one of the country’s best-preserved castles. During your visit, you can tour the castle museum to view the beautifully restored rooms and the handicraft area located in the northern courtyard.

Tallinn, the capital of Estonia, is a must-see if you’re interested in taking in the country’s culture and history. It’s one of the best-preserved Hanseatic towns in the world and showcases a variety of architectural styles spanning the centuries. Medieval buildings standing in modern office blocks make quite an impression.

Stop by the Tallinn Town Hall, the oldest town hall in Northern Europe. This Gothic building dates to the 13th century and is still used today for receptions and events. You’ll also want to visit the Alexander Nevsky Cathedral, a Russian Orthodox church built in 1900.

Estonia’s largest island is approximately the size of Rhode Island, but it’s covered in forests, and it boasts some of Europe’s most diverse flora and fauna. The island offers historical sites alongside modern novelties and provides a great introduction to Estonia’s unique allure as a travel destination.

Here, you’ll find ancient ruins, castles, medieval churches, the aforementioned Panga Cliff, windmills, and a lighthouse, along with great sandy beaches for relaxing between your adventures. The island is also home to the Kaali meteorite field, which was formed around 7,500 years ago.

Europe9 Amazing European Cities Perfect For Exploring On A Bicycle 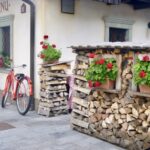 EuropeMy Favorite Excursion On A 7-Day Bike Tour Through Slovenia, Austria, And Italy