Sydney, Australia: The Best Things To See And Do

Sydney, Australia, has earned a well-deserved spot on many bucket lists due to its popularity in films like Finding Nemo, its legendary New Year’s Eve fireworks display, and the 2000 Summer Olympics. Yet, there is more to this vibrant city than meets the eye. As the largest city in Australia, Sydney is popular for its mild temperatures, modern architecture, and proximity to both the ocean and the mountains.

Keep in mind that since Australia is in the Southern Hemisphere, the seasons are opposite those in the United States. The ideal times for your trip are during Sydney’s fall (March to May) or Spring (September to November). Regardless of when you go, once you’ve made the long flight down under, take full advantage of these 10 best things to see and do in Sydney.

The Sydney Opera House, which was commissioned in 1957 to Danish architect, Jorn Utzon, is easily recognizable as it stands on Bennelong Point in Sydney Harbour.

Seeing your first glimpse of the iconic “sails” of the Sydney Opera House is one of the most exciting visual impressions of Sydney. Its outer beauty matches its interior, and an insider tour (which range from free to $175 AUD) of this iconic structure is a must.

Know that the Sydney Opera House isn’t just for looks; it’s an active theater with over 40 shows, ranging from musicals to ballets, gracing its five stages every week. You can also experience its true magic as an opera house — the purpose for which it was constructed! When booking your tickets, opt for a performance in the Joan Sutherland Theatre — the main opera theatre with the best acoustics.

The Royal Botanic Garden Sydney, established in 1816, is free to the public and adjacent to the Sydney Opera House. The gardens display plant species from around the world and provide a beautiful escape from busy urban life.

The gardens are a great place for exercise, long strolls by the Sydney Harbour, and picnics with friends. However, there’s much to learn and volunteers offer free daily walking tours. You can also get insight into how the indigenous population lived off the land before European arrival by booking an Aboriginal Heritage Tour ($41 AUD).

Once you’ve worked up an appetite, eat at the various cafés and restaurants or enjoy a sweet ice cream in the sun!

Mrs. Macquarie’s Chair is part of the Royal Botanic Garden Sydney. It’s about a 15-minute walk from the Sydney Opera House. This tucked away area juts out into the Sydney Harbour, providing a unique vantage point of downtown Sydney.

It’s common to see locals with picnic baskets and photographers setting up their tripods as everyone waits for the most magical time of the day. The sun sets right behind the Sydney Opera House and Sydney Harbour Bridge, which casts stunning pink and purple hues over the harbor.

Enjoy Sky-High Views Of Sydney Over Dinner (Or Drinks)

Located in the Sydney Tower, 360 Bar and Dining is a revolving restaurant. This means the restaurant moves — 360 degrees to be exact — while you eat! It takes 60 minutes to enjoy the full rotation, which gives diners panoramas of the skyline and Sydney Harbour. On a clear day, you can see all the way to the Blue Mountains!

Visit for lunch, dinner, or drinks. The bar opens at noon and stays open while lunch is served from noon to 4 p.m. Dinner is served from 5:30 to 11 p.m.

Climb To The Top Of Sydney Harbour Bridge

Costing $13.5 million AUD to build, the Sydney Harbour Bridge opened in 1932 after eight years of construction.

There are only three bridges in the entire world that are open for climbing, and Sydney Harbour Bridge is one of them. Ascend 1,332 stairs to the bridge’s peak, learn its history, and drink in the panoramic views of Sydney Harbour with a knowledgeable guide.

Ranked travelers’ favorite Australian experience on TripAdvisor, BridgeClimb Sydney offers three different climbs, ranging from 1.5 to 3.5 hours in duration. Depending on the time of day, prices range from $168 to $388 AUD. Generally, sunrise and sunset climbs are more expensive, however, if this is the only bridge you’re planning to climb, it’s worth the cost for a once-in-a-lifetime experience.

Walk Among Ghosts At The Rocks

The Rocks is a small neighborhood located across from the Sydney Opera House on the opposite shore of Circular Quay. It’s become a trendy area buzzing with restaurants, bars, and boutiques. Still, the cobblestone streets and European-style buildings pose a constant reminder of Sydney’s beginnings.

The first European settlers in Sydney — most of whom were rowdy convicts, sailors, and soldiers — established The Rocks in 1788. As expected, lawlessness thrived.

Stories of violence, murder, and ghosts dating back to the 1800s have been passed down through the generations and have become part of The Rocks Ghost Tour. The two-hour walking tour ($45 AUD) takes the brave-hearted behind closed doors, into underground tunnels, and through narrow alleyways to bring these eerie stories to life, delighting aficionados of the paranormal and history buffs alike.

Soak Up The Sun At Bondi Beach

Bondi Beach offers a couple options for swimming. The Bondi Icebergs Club charges an entrance fee ($8 AUD), but its saltwater-filled lap pool adjoining the ocean provides a unique swimming experience. Whether you decide to take a dip or watch the waves crash into the pool from above, it’s a sight to be seen in person!

If you’d rather enjoy the beach, you can either lounge in the sand or swim in the ocean. Swimming during the winter months — remember, these are opposite the U.S. — may be too cold, but generally the water temperature stays in the 70s the rest of the year. If you choose to swim, make sure you do so between the two red poles designated by lifeguards. Due to rip currents, swimming off other parts of the beach can be dangerous.

After a long day of sunshine, swimming, and sight-seeing, be sure to relax at one of the seaside restaurants with a vodka martini or ginger beer in hand.

Walk Along The Sandstone Cliffs From Bondi Beach To Coogee

The Bondi to Coogee Coastal Walk is a popular trail among locals and tourists alike. Walk along sandstone cliffs, drink in the stunning horizon, and admire Sydney’s picturesque beaches.

Spanning for two to three hours depending on your walking speed, the trail passes through several small beaches, Aboriginal rock art, and multiple overlooks. During whale season — May to September — make sure to keep an eye out for humpback whales. If you see a big splash or a water spout in the distance, you probably just witnessed a whale coming up for air!

Once you conquer the walk to Coogee Beach, reward yourself with coffee and a snack at one of the many beach cafés.

With over 4,402 square miles (yes — the park is larger than Yellowstone!) of forests, waterfalls, and sandstone formations to explore, the Blue Mountains warrant a full day trip out of Sydney.

Make sure to hike — also known as “bushwalk” in Australia — the Wentworth Falls track to enjoy a taste of distinctively Australian nature. Also stop by the Three Sisters rock formation and at one of the overlooks. For the best panoramic views, visit Govett’s Leap and Echo Point.

You can’t visit Sydney and not admire a koala or feed a kangaroo! Taronga Zoo has 4,000 animals and an incredible 350 species. The zoo is located just 12 minutes from Circular Quay in the suburb of Mosman.

It’s open every day from 9:30 a.m. to 5 p.m. Your purchase of zoo tickets is put to good use as Taronga Zoo is dedicated to the research, sustainability, and conservation of native Australian wildlife. 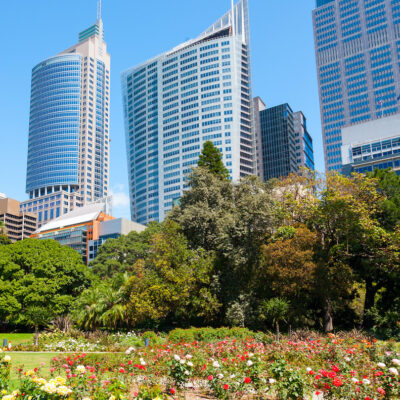 Sydney9 Tips For Experiencing Sydney On A Budget 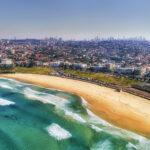 SydneyHow To Spend A Perfect Weekend In Gorgeous Bondi Beach 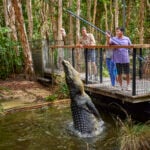