How My Trip To Uganda Changed Me

All my life, I’ve known two facts about myself. One, I am black. Two, my ancestors are from Africa and were sold into slavery in the United States.

During my first trip to the continent of Africa, I was on my way to safari in Murchison Falls National Park in Uganda. Someone asked me, “Where are you from?” I’d been looking around in a souvenir shop and the store owner was watching me. I responded nervously, “The United States of America.” I’m not clear why I was so unsettled by this question. Perhaps I was dreading what I hoped would not be the next one.

He studied me as if what he was hearing did not match what he was seeing. He said, “No what tribe?” That’s when the smile left my lips because he had in fact asked the one question about myself I didn’t have the answer to. I responded, I don’t know. The Ugandan merchant looked surprised and confused. His face said what do you mean you don’t know? He rubbed his beard and then told me he assumed I was from a tribe in western Uganda because he thought I was African but when he heard me speaking English it was strange to him. He spoke English, but I honestly couldn’t understand everything.

As I think back on it, I looked silly just standing there not knowing what to say in English or Swahili. He called another Ugandan man over to confirm his thoughts saying, “Doesn’t she look like she’s from the west?” The Ugandan bystander who had been watching the exchange said, “Yes, her skin color — her build, yes, she does.”

That conversation was somehow the ointment I needed to put on a wound I was born with. The healing process had been started.

My primary purpose for visiting Uganda was to visit a dear friend and her family. She works for the Center for Disease Control (CDC) and had been posted in Africa for the past 9 years. Coming up on her last year of the assignment, it pressed me to visit before I no longer had the opportunity. As the trip drew closer, I got excited thinking about the cultural significance of the trip for me as an African-American. I experienced mixed emotions. I felt like an orphan who would finally get to meet her birth family with thoughts vacillating between “what if they don’t like me?” and “what if I don’t like them?” I was also looking forward to being a tourist and seeing this country that my friend loved so much.

As I boarded the plane for the 19-hour flight, scenes from the movie Roots (based on the book by Alex Haley) played incessantly through my mind. Particularly the one where the slave owner has Kunta Kinte tied to a tree and says, with a lash of the whip, “What’s your name boy?” He replies, “Kunta Kinte.” The owner strikes him with the whip and yells again, “Your name is Toby!”

It was as if my unconscious mind was reconciling my initial understanding of the history of slavery for my upcoming experience.

As we began the decent into Entebbe airport, I looked out of the window and thought to myself, “My ancestors were taken from this land in chains and packed into a slave cargo ship, and here I am arriving by airplane.” To say I was emotional was an understatement. I was having a moment as I looked down onto the city from above the clouds. Neither my parents nor anyone in my immediate family had ever been to Africa, and I felt honored to be there representing them.

As I deplaned, like the way someone greets you in Hawaii (with a Lai and a hearty ‘Mahalo!’), I imagined the Ugandan airport workers and those waiting for their loved ones pointing at me and saying, “Yhere she is! It’s her! She’s home! Welcome home, daughter! Welcome home, sister!” I’d sweep through the gate and not have to wait in any lines because I was the prodigal daughter returning home.

None of that happened. Not one bit. They ushered me through the customs process with the same non-enthusiasm every other non-Ugandan citizen received. They asked me for my vaccination card, then I moved to the line to complete the Visa process. I proceeded to the exit hall which I couldn’t discern how to actually exit out of. I was picked up by my friend’s husband and whisked away in a car that had the steering wheel on the wrong side of the car (according to my US driving standards!).

As I began my trip to the city of Kampala from the Entebbe airport, I tried to take it all in. The roads were busy with people walking, riding Boda Bodas (motorized bike taxis) and cars, and I couldn’t keep myself from staring. Watching it all as if I only had a few minutes before my time was up and someone would shut it off. I saw clothing stores, people carrying fruits and vegetables in baskets and on their heads, and views of Lake Victoria. It’s not as if I’ve never seen African men or women before, but I’ve never seen Africans in the comfort of their own home. I was really looking for myself and anything that resembled what was in the face of others.

You would pass one area of shops, restaurants, and buildings then turn and see lush green areas. Fruits and vegetables were being sold on just about every corner. An abundance of green bananas (Matooke — pronounced Ma Toke Kay) and green banana leaves used to make the regional dish that bears its name could be found on the back of trucks, in baskets on heads, in crates, buckets, Boda Bodas, and stands. Piles of cabbages were also in abundance. Buildings needed repair, a sign of poor, underdeveloped communities. We passed homes with cows and goats tied in the front yard as beloved pets. At one point we pulled up to a vegetable stand and people came from everywhere offering fruits and vegetables along with chicken and other meats on skewers at the window of the car.

There is something about seeing elephants, baboons, giraffes, hippopotamus, antelopes, and lions in their natural habitat that ruin you for the zoo. Watching the animals up close at the state park was exhilarating and scary at the same time. On one hand, I was intruding on the animals, but on the other hand invited by them to witness their life. I observed how mothers cared for and chastised their babies, how siblings played with each other, how boys fought for the affection of girls, and how a nice muddy puddle of water was the perfect chill spot under the hot African sun.

Through time spent and interactions with the local Ugandans, my self-perspective changed. The empty space in my soul from never knowing my cultural origin slowly began to fill up. There were many mannerisms and likenesses in myself that I was seeing in the Ugandans. I was mistaken repeatedly for an African woman but from another area. That usually led to chilly welcomes from other local women but for each slight I received (I was clearly being given shade), it was a confirmation. The African in my African-American label was legitimate, like the roots of a strong tree.

My final activity was a grand African Dance show at the Ndere Cultural Center. The Ndere Troupe performed several dances which represented numerous tribes from all over Uganda. They performed with musical instruments, wore brilliantly colored tribal clothing, and danced in a manner that simply delighted my soul. As the Ndere troupe drummed, danced, and sang, I relived my family reunions, my historically black college and university homecomings, my teenage parties, my dances in my bedroom. I was reminded of my sorority life. Hundreds of years of slavery didn’t destroy what I defined as lost.

I returned from my time in Uganda with a deeper sense self-pride I didn’t have before arriving. I still don’t know which tribe I originate from or the country in Africa linked to my DNA. However, I no longer carry the resentment or burden associated with it.

Instead, I walk in the strength, confidence, and beauty that resonated in the many faces I met during my first trip to my Motherland of Africa. 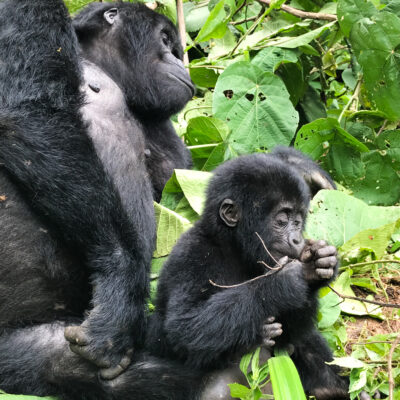