The minute we arrived at the railway station in Cape Town, we knew we were in for a treat. As our bags were whisked away and transferred to the wood-paneled, deluxe suite that was to be ours on the journey, we were ushered into the private lounge area and serenaded by a violinist as sparkling wine and canapés were offered.

Once all our fellow passengers were assembled and comfortably seated around the room, we were welcomed by Rohan Vos, the man who started the family-owned Rovos Rail in 1989, developing it into what it is today — one of the world’s best and most luxurious trains, The Pride of Africa.

With introductions done, we were ushered across the road to the waiting locomotive, where liveried staff were lined up to formally greet the 37 guests and direct them to their compartments. Stepping off the gray concrete platform and onto a red carpet, we knew this was going to be a trip to remember. With more than 30 staff on board — from chefs bartenders, and wait staff to security guards, housekeepers, train drivers, technicians, and a jovial train manager, Hennie, to oversee them all — this is a railway trip in a league of its own.

Old World Charm Of The Train

When it comes to travel, convenience and efficiency are usually priorities. Every once in a while, though, you crave something leisurely and luxurious, an old-world mode of exploration that allows you to take in the sights in a more indulgent way, and a trip on South Africa’s Rovos Rail gives you exactly that. As the train chugs out of the station, our journey begins.

Since its establishment in 1989, Rovos Rail has earned an international reputation as a truly world-class travel experience. The trains, which may be hauled by diesel or electric locomotives at various stages of the journey, carry a maximum of 72 passengers in 36 superbly appointed suites. For our 3-day journey from Cape Town to Pretoria, we had 17 coaches with 37 passengers aboard.

Rovos Rail is known as one of the world’s most luxurious trains, offering world-class train travel experiences through the heart of Southern Africa, with destinations including Cape Town, Victoria Falls, Zambia, Angola, Namibia’s Etosha National Park, Zimbabwe’s Hwange National Park, and all the way to Tanzania’s Dar Es Salaam. Pride of place in the Rovos stable goes to the historic restored Capital Park Station and locomotive yard in Pretoria, which is the heart and headquarters of this private railway company.

For aficionados, the train consists of the locomotive, generator car, staff car, guest sleepers, a non-smoking lounge car that can accommodate 26 guests, two non-smoking dining cars, a smoking lounge car, and the observation car with plentiful space for 32 guests, complete with an open-air balcony at the end of the train. Maintaining the spirit of a bygone era, there is no Wi-Fi and no radios, newspapers, or television sets on board — reviving the art of conversation.

The Pride of Africa offers so much more than mere rail transportation. Rovos Rail has a style all of its own. The rebuilt sleeper coaches, all with en suite bathrooms, combine original Edwardian features and fittings, with all the modern amenities you would expect from a 5-star stay — air-conditioning, hot showers, hair dryers, and a bar fridge filled with your choice of beverages, including such “survival necessities” as MCC (Méthode Cap Classique) Champagne. Befitting such a journey, you have a dedicated host/ess at your call and available at all times, as well as around-the-clock room service.

The spacious suites, some of the most spacious train suites in the world, each accommodate two people and offer passengers the opportunity to travel in privacy, comfort, and luxury. There are three styles guests can choose from (Royal, Deluxe, and Pullman), each with varying levels of luxury.

The Royal Suites are named after colorful characters of South Africa’s Victorian era, including Cecil John Rhodes and Alfred Beit, and are definitely fit for royalty! Taking up a generous half a carriage (around 172 square feet), they come complete with their own private lounge, and feature an ensuite bathroom with shower and clawfoot Victorian bathtub. How often does one have the opportunity to have a soak in a full-sized bath on a train?

The Deluxe Suite is also sizable at 118 square feet, with an en suite bathroom with shower and a small lounge area. It’s quite a decadent experience to be able to lie in bed and watch the passing scenery slide past your window without exerting any effort whatsoever!

The Pullman, at 76 square feet in size, is ideal for shorter trips. During the day, the suites have a comfortable sofa seat that is converted to double or twin beds in the evenings, and the en suite bathroom has a shower.

Pro Tip: In keeping with traditional train travel from yesteryear, there are no televisions or radios on board. As a courtesy to fellow travelers, the use of electronic devices, which may be irritating to others, is restricted to suites only.

There are three lounge areas and a dining area on the train. The lounges consist of a non-smoking lounge car, a smoking lounge, and the observation car. Deep sofas and wingback armchairs make for a comfortable ride in any of the lounges while you relax and watch the spectacular scenery roll past. The observation car at the tail end of the train was definitely one of my favorite spots. I loved the experience of being outside whilst the train was moving, looking back the way we had come, and I found the sight of the train tracks receding behind us mesmerizing.

Guests are summoned to dine by a mini-xylophone, and dressing for dinner is expected — men are required to dress in a jacket and tie and ladies in cocktail or evening dresses. This ceremonial “dressing for dinner” makes the whole experience feel special, and the food is certainly worth the effort. Four-course meals are served in the beautifully restored cherry-paneled, teakwood-pillared restaurant car with cut-crystal wine glasses, fine china, starched linen napkins, silver cutlery, and seamless service.

When catering for a full complement of guests within the limited space of a train kitchen car, achieving a standard that rivals that of fine restaurants is a challenge. There is an emphasis on fresh, local ingredients. Traditional dishes such as game meat are a specialty, and a selection of fine wines from some of South Africa’s most renowned estates complements the menu. Your tastebuds will be treated to a selection of South African delights that include Karoo lamb, bobotie, melktert, and Cape brandy pudding.

Considerable thought and meticulous planning go into devising the menus, and an enthusiastic team of chefs is responsible for overseeing the task of ensuring that all the guests enjoy the indulgence. I must say, a full stomach, wine, liqueur, and the soporific rhythm of the train definitely helps lull you to sleep when you retire to your compartment after dinner.

A full breakfast is served in the morning with a selection of cold meats, croissants, and preserves as well as dishes cooked to order, and lunch is another four-course meal — though a little lighter than dinner.

Pro Tip: While dressing for dinner is expected, during the day guests are encouraged to feel at home and the dress code is casual.

Routes Through Some Of Africa’s Greatest Destinations

In a series of train journeys ranging from 3 nights to a fortnight, Rovos Rail links some of Africa’s greatest destinations — from Cape Town at the tip of Africa to Dar es Salaam at the Indian Ocean in Tanzania, with scenery as diverse as Kruger National Park to the Victoria Falls, from the desert landscapes of Namibia to the stark beauty of the Karoo and the lush cane fields of KwaZulu-Natal.

We were traveling from Cape Town to Pretoria, a driving distance of 911 miles and normally just an overnight journey, but on Rovos Rail, it takes a leisurely 2.5 days of comfort, style, and elegance.

The journey took us through Cape Town and into the valleys and mountains of the Cape Winelands before crossing the mountain range and entering the vast semi-desert of the Karoo, famous for its lamb, which would make an appearance on the menu that night. En route, we disembarked at the tiny historic town of Matjiesfontein, an authentically preserved Victorian village on the fringe of the Karoo that was founded as a refreshment stop in 1890 and was a renowned Victorian health resort where those suffering from lung complaints found respite in the clear dry air. It was also a station for British troops during the Boer War (1899–1902). The town’s historic buildings, like the Lord Milner Hotel, have been restored to their former glory.

The next day’s destination was the diamond mining town of Kimberley, where miners in the 1800s excavated the largest man-made hole in the world, which descends a staggering 2,755 feet below the earth. We paid a visit to the Diamond Museum and learned about the heady days of the diamond rush, before visiting the “gift shop,” though sadly, my husband could not be enticed to open his wallet! Kimberly is also home to the colonial “Kimberly Club,” where Cecil Rhodes once dreamt of a railway line from Cape Town to Cairo, and all of Africa under British rule.

Leaving the Karoo behind, the tracks took us through the savannah-like Highveld before arriving the next morning in the city of Pretoria, the executive capital of South Africa, known for its stunning, purple-flowering jacaranda trees. Here, with a hiss and a screech, the locomotive — complete with suites, lounges, and dining cars — ground to a halt. We’d reached the end of the line, and our journey was done.

Pro Tip: The three-night Cape Town journey is a classic, but if you’re feeling more adventurous and have more nights to spare, perhaps opt for the 15-day “Trail of Two Oceans” itinerary, originating in Dar es Salaam, Tanzania, crossing Zambia, traversing a sliver of the Democratic Republic of Congo, and concluding in Lobito, Angola.

Rail is one of the most indulgent and comfortable ways to travel — with a spacious suite all to yourself, you can pass the days relaxing or mingling with fellow passengers while the beauty of Southern Africa’s scenic landscapes passes by the window.

This extravagant railway has been traveling throughout Africa for over 30 years and offers one of the world’s most luxurious train travel experiences, combining the golden age of rail travel with modern conveniences and giving you the chance to explore Africa in all the luxury of a bygone era. If you fancy stepping back into time, but in the utmost style, traveling across Africa’s vast plains with Rovos Rail is the journey for you. 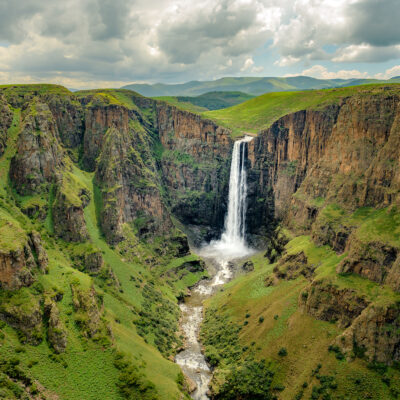